Home » BD Magazine » Column » Family and Kids » You are reading » 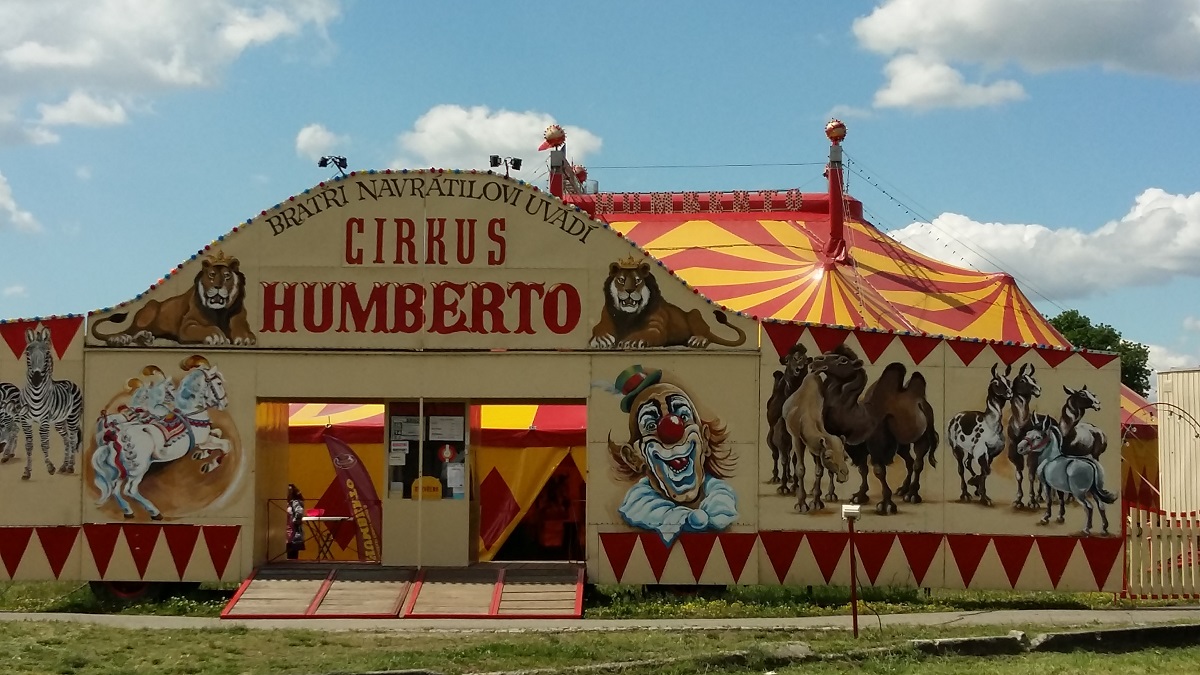 Cirkus Humberto is back in South Brno, with an amusement park beside it, a seating plan to follow the COVID-19 social distancing regulations and, apparently, the hope that the people of Brno have changed their minds about circuses. Photo Credit: Bruno Zalubil.

Last year, the city of Brno had a vote of sorts to determine whether circuses should be allowed to perform here. The results were overwhelmingly negative: more than 1,500 of about 2,000 votes were against the rental of city land to circuses.

I follow the news and try to keep myself informed. Yet, I was dumbfounded as to why circuses were such a big issue here in Brno. I had a passing memory that Ringling Bros. and Barnum & Bailey Circus closed in 2017 after 146 years of performing around the United States. But were the changing times and animal rights protests such a big deal here, too?

You don’t see a 60-point margin very often in polling. Why do the people Brno hate circuses so much? (Read the original Brno Daily article here.)

Even more strange, since that overwhelming vote there have been at least five circuses in my south Brno neighborhood. Nothing seemed to make sense.

And, frankly, thinking of circuses made me want to go to one. It would be a fun father-daughter event.

Apparently, the vote was to produce data for making a recommendation to “the management of city districts to consider the possibility of not renting land to circuses with wild animal species.” It was non-binding, so the recommendation was ignored, particularly by the starosta (mayor) of Brno-Jih, who welcomed the influx of funds and was probably influenced by the fact that several extended families of carnies winter in South Brno when they are not traveling around the continent with carnival rides.

That is why a circus — there were at least two different companies — seemed to constantly return to the large open spaces in the Komec area of South Brno.

Cirkus Humberto, for example, set up in mid-March only to be effectively closed down when the COVID-19 pandemic quarantine period started. Now it is back, with an amusement park beside it, a seating plan to follow the COVID-19 social distancing regulations and, apparently, the hope that the people of Brno have changed their minds since the vote.

The circus is not a bad experience. Last fall, I took my daughter, along with a friend and his daughter, to the circus. It created nice memories.

The show started with an exciting opening with ballyhooing lights and music. The cast of characters made appearances and one of the ringmasters started the program. There was a solo act by an acrobatic woman. There was a strong-man balancing performance. There were zebras and camels and dogs circling around the ring and sometimes jumping over each other. A clown played around with the performers and the crowd. And the elephants raised the intensity just before intermission.

The second half started with a powerful jolt of adrenalin because several lions were brought into the temporary cage that had been installed during the break. They were right there, just meters away, baring their gleaming white teeth at the lion tamer and the audience.

Then there were dancing bears and a high-wire act and a magician with a lovely assistant. It all ended with a climactic song-and-dance number where all of the performers came out for a bow.

Oh, and they sold big tubs of popcorn, a big plus in my book.

Nothing was particularly stylish, like Cirque du Soleil of Las Vegas (the last circus-like performance that I had attended), but that made it all the more interesting. It was old school, like going into the neighborhood bar — slightly seedy and not perfectly clean, but somehow comfortable. Trinkets and balloons and pictures were being sold. Experiences, like getting a photo with an elephant or visiting the animals during the intermission, added costs to the modest ticket price.

To be honest, I didn’t feel 100-percent safe when the elephants were dancing around or when the lions glared out through the thin bars of the cage. But, then again, that is part of the fun. It was just enough menace to make it borderline scary for my then 4-year-old daughter.

She enjoyed herself and, whenever she sees a circus big top, brags to her brother about how she went to the circus and he didn’t.

I think the circus vote was overblown. I can appreciate the negatives that many have about using animals for entertainment. I personally do not care to see bears walk on their hind feet because it looks unnatural and humiliating. I definitely never want to see animals mistreated.

Yet, none of these animals looked unhappy and I trust that they are all well taken care of and loved.

For what it is worth, I think there is room in this world for circuses, even in Brno. Most of the locals who voted No on circuses probably spent several nights binge-watching the recent Netflix documentary “Tiger King: Murder, Mayhem and Madness” — perhaps slightly put off, but fascinated nevertheless.

That seems about right for the circus.

https://brnodaily.com/2020/05/30/family-and-kids/bruno-the-circus-is-in-town/https://brnodaily.com/wp-content/uploads/2020/05/Circus053020-2-1024x576.jpghttps://brnodaily.com/wp-content/uploads/2020/05/Circus053020-2-150x84.jpg2020-05-30T14:47:04+02:00Bruno ZalubilBD MagazineColumnFamily and KidsBrnoCirkus Humberto is back in South Brno, with an amusement park beside it, a seating plan to follow the COVID-19 social distancing regulations and, apparently, the hope that the people of Brno have changed their minds about circuses. Photo Credit: Bruno Zalubil. Last year, the city of Brno had a...Bruno ZalubilBruno Zalubilbzalubil@hotmail.comAuthorA connoisseur of the unpredictable and unscripted drama of sports.Brno Daily

A connoisseur of the unpredictable and unscripted drama of sports.
View all posts by Bruno Zalubil →
« Brno from B to Ž: A Tough-Love Guide to the City’s 48 Neighborhoods, Part 3 – Brněnské Ivanovice
Combating Violence Against Women in the Czech Republic: Beyond the Coronavirus »