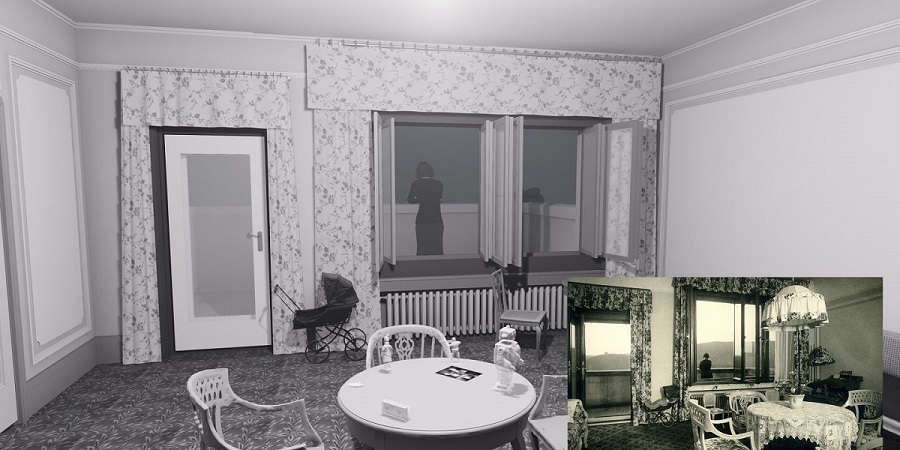 Susi Stiassni captured her dreams in purpose to psychoanalysis. However, her granddaughter was so fascinated by her memories of Brno, that she decided to shoot a film and she also asked programmers from Masaryk University to create a video game, according to Magazín M. Photo credit: CC-BY.

Brno, Dec 2 (BD) – The daughter of Brno textile factory owner Alfred Stiassni Susane left Czechoslovakia with parents in 1938. Inhabitants of unique villa in a luxury district of Brno Pisárky were Jews and the thread of Nazi regime forced them to emigration. Susi was at that time 15 years old. Through London, Stiassni got to the United States, where also Susi spent the rest of her life. However, she did not forget her Czechoslovakian home.

At an advanced age she wrote down her dreams, initially as a basis for psychoanalysis. More than 20 thousand records have been preserved. Hundreds of them take place directly in the villa or in Brno and its surroundings.

The dreams captured in Susi’s diaries reflect according to her granddaughter Daria Martin everything she had experienced as a child. “There were often various intruders or references to the Holocaust,” said Martin. The dreams also contain expression of the fear of Nazism and what might happen, as well as memories of how the family eventually escaped.

Daria Martin had already made a film based on the memories named Tonight the World. However, she wanted to create a video game too: “I find it symbolic, because the history of Brno is shifting from the era of the industrial center to the city, which is dedicated to the development of video games. My grandmother’s family represented the industrial era, and now we have entered the era of video games.”

Martin got tp contact Jiří Chmelík from Department of Visual Computing in Faculty of Informatics Masaryk University, which is currently engaged in game development. The final form of the game could be described as “walking simulator where a player walks freely through space, interacting with him by collecting individual artefacts, revealing the story we are trying to convey,” told Chmelík to Magazín M.

The computer game was developed to work also as an interactive guide to the villa, so its founder will be able to use it for presentations. For this, however, it was necessary to create a digital model, on which Jiří Chmelík cooperated with the Národní památkový ústav and two students from Oxford who wanted to learn more about development of games.

It was necessary to spend many hours directly in the villa and take thousands of photographs. A difficult part is programming individual tasks in the game, such as opening doors or collecting items. According to Chmelík, the new thing for the programmers were the getting to know the story of Susi, the artistic concept of the project as well as the fact that they normally create games with much lesser extent.

https://brnodaily.com/2019/12/02/news/game-developers-of-masaryk-university-created-video-game-based-on-memories-of-susi-stiassni/https://brnodaily.com/wp-content/uploads/2019/11/18-Susi-out-of-window-with-objects-1440x720-2880370978-1.jpghttps://brnodaily.com/wp-content/uploads/2019/11/18-Susi-out-of-window-with-objects-1440x720-2880370978-1-150x75.jpg2019-12-02T09:59:14+01:00Kamila JablonickáCzech Republic / WorldBrno,Czech Republic,Masaryk University,TechnologySusi Stiassni captured her dreams in purpose to psychoanalysis. However, her granddaughter was so fascinated by her memories of Brno, that she decided to shoot a film and she also asked programmers from Masaryk University to create a video game, according to Magazín M. Photo credit: CC-BY.Brno, Dec 2 (BD)...Kamila JablonickáKamila Jablonickák.jablonicka@seznam.czAuthorA student of journalism and international relations, mainly interested in current topics, but also in media, culture and its impact on our lives.Brno Daily

A student of journalism and international relations, mainly interested in current topics, but also in media, culture and its impact on our lives.
View all posts by Kamila Jablonická →
« What’s Up Brno? – Events in Brno, Week n°49
The Latest Edition of KAM v Brně/WHERE in Brno Is Out Now! »