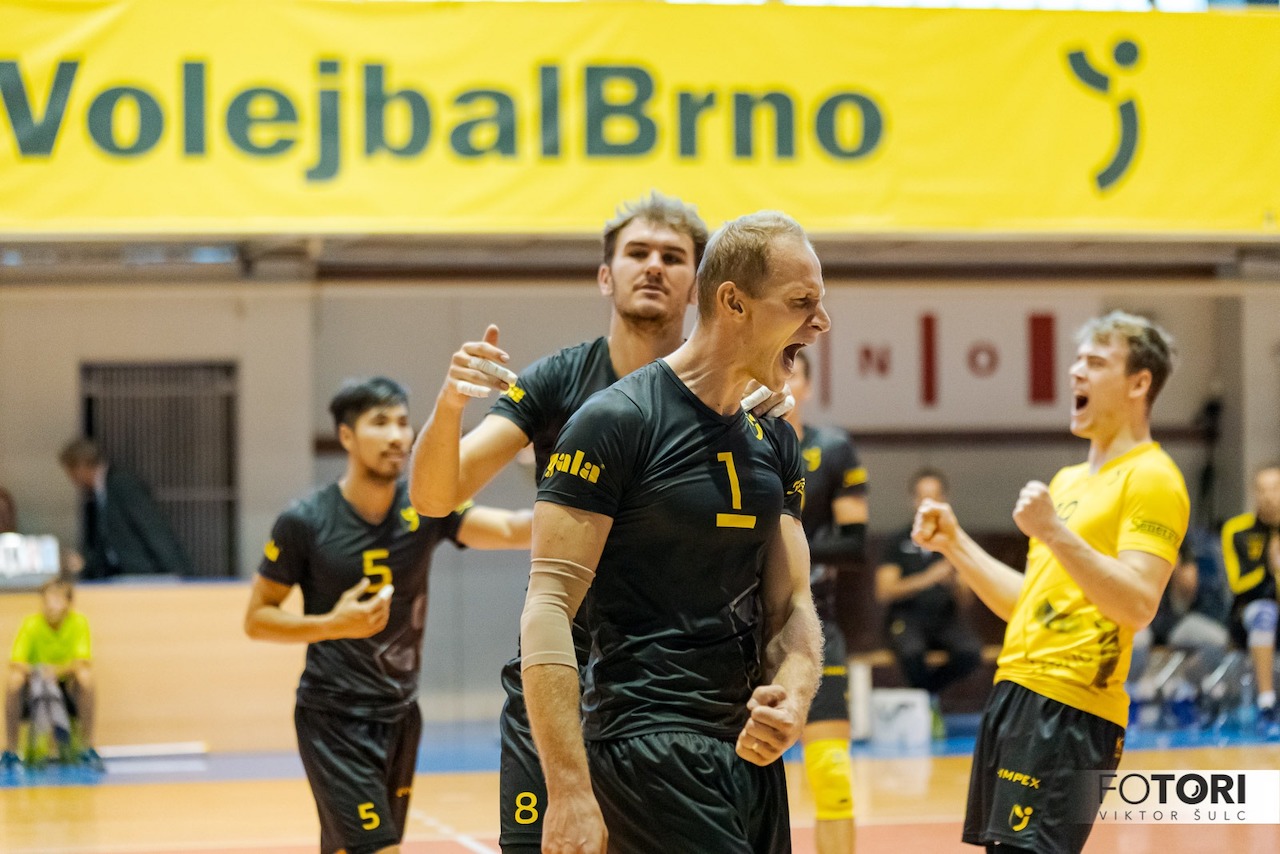 There is a court that is just off of Kounicova Street that, though it is hidden at the back of a large building, comes alive for volleyball matches.

It is an old and compact space with a lot of character — and it will definitely be loud on Monday when both of the professional teams who call the court home will have matches against Moravian rivals: VK Šelmy Brno, the women’s team, will host TJ Ostrava at 4 p.m. and Volejbal Brno, the men’s team, will host VSC Fatra Zlin at 7:30 p.m.

The exact address of the court is Kounicova 22. It may be easier to come in through the back entrance off of Sokolska Street.

In the women’s league — Uniqa Extraliga Ženy — VK Šelmy Brno is in a battle for the top spot. After one round of the regular season, they are tied with Olomouc atop the standings with 8-1 records. Ostrava is just a cut below at 7-2.

Brno finished its first run through the 10-team league on Saturday when it traveled a kilometer north to Městská hala vodova to play VK KP Brno (3-6). The Šelmy won the match, 3-1, losing just the third set.

“Being aggressive is one of our problems,” Šelmy head coach Ondřej Boula said after the match. “We need to stay focused. We won the first sets without a problem, but it came back on us a little bit. We didn’t stay with the tactics that we had been using.”

Consistency will be important against Ostrava on Monday. Brno won, 2-3, when it played at Ostrava on Sept. 26.

Volejbal Brno, the men’s team, is through just five rounds of the season. They are currently in seventh place with two wins. Zlin is in 12th and last place and has yet to win a set in five matches.

As the fall half of the Fortuna:Narodni Liga season is coming to a close, FC Zbrojovka Brno has moved into fourth place, just a cut below the top positions that will allow for a chance to return to the top league.

Zbrojovka is 7-4-3 with 25 points. They play for the final home game for four months when they host Prostějov at 7 p.m. on Friday.

After a weeklong break, the 16th round game will be at league-leading Pardubice on Nov. 23. That game will start at 10:30 a.m.

Zbrojovka hosted Pardubice in late July. The game ended in a 1-1 tie. Pardubice is now 10-2-2 with 32 points. A road victory before the winter break would be a huge boost for Zbrojovka’s chances at earning their way back into the Fortuna:Liga for next year.

On Friday, Antonín Růsek and Jakub Přichystal joined forces to immediately attack FK Slavoj Vyšehrad and lead the way to a 4-1 victory.

Růsek, with assists from Přichystal, scored in the first and the eighth minutes. Then, in the 14th minute, they changesd places with Přichystal scoring from an assist by Růsek.

Šimon Šumbera added the fourth goal just after halftime. Unfortunately, the shutout was lost in the 89th minute.

SK Líšeň lost at FK Dukla Praha, 4-2, on Saturday morning. The team is now ninth in the league with a record for 5-4-5 with 19 points.

This Saturday, Líšeň travels to FK Fotbal Třinec for another bunch game at 10:15 a.m. The final home game and the final game of the fall season is Nov. 16 against MFK Chrudim. That game starts at 1:30 p.m.

Though they were at the top of the standings at the beginning of the week, HC Kometa lost twice and got shuffled down to fourth place in the Tipsport extraliga standings.

The first blow was a 0-3 loss to Mladá Boleslav on Friday. Two days later, in Prague on Sunday, the second blow came when HC Sparta Praha rallied from a three-goal deficit to win, 5-4. Sparta scored four goals in the third period, including the winner with just 14 seconds left in the game.

The season is roughly a third of the way through. Sparta is now first in the league with 35 points. Plzeň is second with 32 points. Mladá Boleslav and Brno both have 32 points.

KP Brno rebounded from a long trip to Israel to beat SBŠ Ostrava, 65-84, on Sunday.

They enter this international break in third place in the Renomia ŽBL with a 6-2 record. Their only losses have been to first-place ZVVZ USK Praha (8-0) and second-place Sokol H. Králové (7-1).

In international play, KP Brno lost at EuroCup game to Ramla of Israel, 80-63, on Thursday. They have another EuroCup game tonight (Wednesday) when they host Gorzow (POL) at 5 p.m.

The other Brno team, Žabiny Brno, had mixed results. They lost at Sokol Hradec Králové, 80-76, on Wednesday and then trounced U19 Chance, 34-102, on Saturday. They will travel to SBŠ Ostrava today for their final league game before the lengthy pause.

In unfortunate news, Žabiny Brno lost one of its highly touted players when Kym Royster, a young post player from Indiana University, reached the end of her 90-day stay in the Czech Republic. She was not able to acquire an extension and was forced to return to the United States on Friday. She will not return to the team.

mmcité1 Basket Brno lost its seventh league game but, by punching above its weight and showing flashes of success, the team has earned respect from its opponents. It is not much, but it is something.

On Wednesday, Brno had a shot at the buzzer to win at BK ARMEX Děčín. It came too late and would have missed anyway. Děčín 68, mmcité1 Basket Brno 66.

On Saturday, Brno was in tough against the best team in the league, ERA Basketball Nymburk, and lost, 71-101, at home. That game was closer than the final 30-point margin.

Lukáš Stegbauer had a solid game and equaled his season high of 16.

“Brno is a good team and its results so far are not a true picture of the Brno game,” Nymburk head coach Oren Amiel said. “We knew that, so we urged our players to play with the right mentality. That didn’t happen at the beginning. Gradually, Brno began to play very aggressively. I am glad that it motivated us and we were able to respond correctly.”

Just before a two-week break, they will travel to Kingspan Královští sokoli (1-6) on Nov. 22.

The final 11 rounds of the first part of the regular season start in December with another run through the league as teams fight to earn a berth in Group A1, like Brno did last year, and then the postseason.

Lokomotiva Brno-Horní Heršpice made a big step forward when they travelled to Prague and beat FK Dukla Praha, 1-4, on Saturday.

Lucie Lišková scored in the 10th and 34th minutes. Desana Dianišková had a first-half goal and Katka Kukučová added a second-half goal.

The Brno women’s team is now 3-2-5 with 11 points and in fifth place in the top women’s league in the country. FK Dukla Praha (2-2-6, eight points) slipped to sixth place.

The next opponent is FC Viktoria Plzeň (5-0-5, 15 points). The bohemian team will be in town on Nov. 16. It is the final game of the fall part of the season.

The season resumes with three games in February. Then the teams will be split into an upper and lower group for the second phase of the season.

https://brnodaily.com/2019/11/06/sport/brno-sports-weekly-report-two-for-one-volleyball-monday-night/https://brnodaily.com/wp-content/uploads/2019/11/VolejbalBrno061119-1024x683.jpghttps://brnodaily.com/wp-content/uploads/2019/11/VolejbalBrno061119-150x100.jpg2019-11-06T09:51:45+01:00Bruno ZalubilSportBasketball,Brno,Czech Republic,Kometa,SportVolleyball is nothing if not intense. Volejbal Brno (the men’s team plays at 7:30 p.m. against VSC Fatra Zlin) and VK Šelmy Brno (the women’s team plays at 4 p.m. against TJ Ostrava) on their home court at Kounicova 22 this Monday. Photo credit: Viktor Šulc.Brno, Nov 6...Bruno ZalubilBruno Zalubilbzalubil@hotmail.comAuthorA connoisseur of the unpredictable and unscripted drama of sports.Brno Daily

A connoisseur of the unpredictable and unscripted drama of sports.
View all posts by Bruno Zalubil →
« Several Primary Schools and Kindergartens Across Brno To Close Tomorrow Due To Teaching Strike
In Photos: A New Home For Brno’s Llamas »