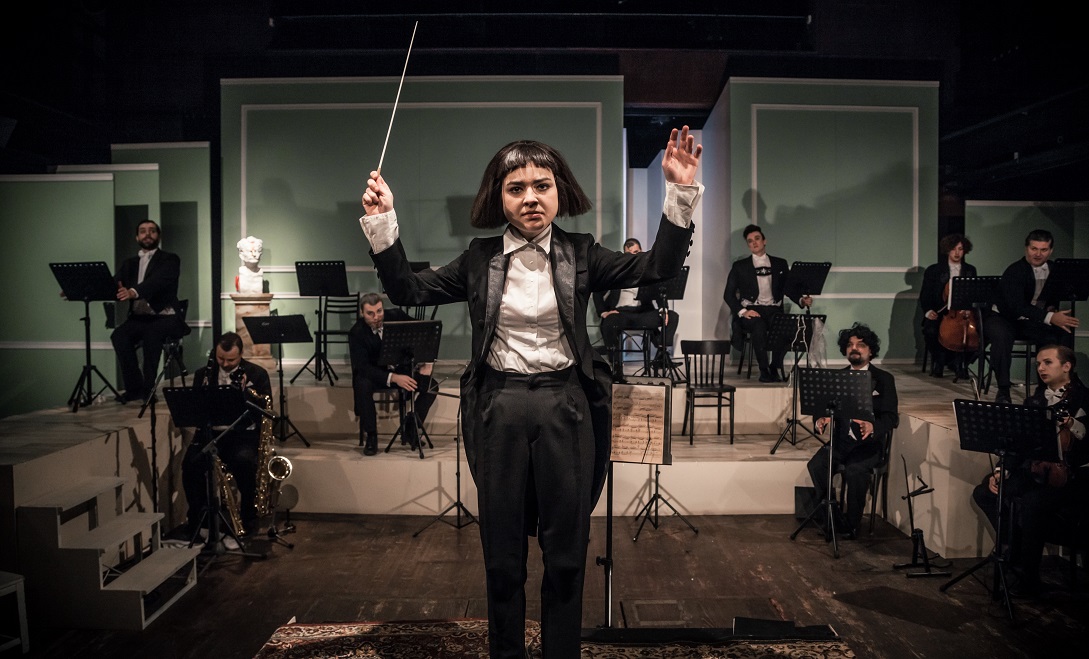 Divadlo Husa na provázku’s experimental, innovative stage production was the perfect match for this dramatic parable of feminine strength and independence in a dangerous era hostile to both of those concepts. Photos: Vitka by Jakub Jíra.

Brno, Sep 17 (BD) – Vítězslava Kaprálová (1915-40) was among the most promising Czech composers of her generation, the daughter of a musical family, student of many of the greats of the era including  Vítězslav Novák and Bohuslav Martinů, the latter of whom fell madly in love with her. Her challenging avant-garde work met with both acclaim and bafflement from critics, but her talent was cut short, first by the onset of war in 1939 and then with her premature death in 1940 aged just 25. Since then the accomplishments of her short life have been overlooked, but the last ten years has seen a renewed interest in both her work and her fascinating character. In that context comes “Vitka”, written by Brno’s Kateřina Tučková, a stage play retelling her story in the experimental theatre setting of Divadlo Husa na provázku, which was performed with English surtitles on Sunday 15 September.

The theatre is well-known for its intricate stage production, and “Vitka” uses this to great effect, depicting the dynamic, hyper-social world of classical music and the colour and drama of Vitka’s life via continuous onstage movement and rich visual imagery. The eccentric and innovative sound design adds to the tension throughout, such as in the breathtaking scene in which one pianist’s attempt to perform a recital of Vitka’s work coincides with the onset of war in Paris, or the divorce of Vitka’s parents, represented in song to allude to Vitka’s musical understanding of the world as well as her young age. Despite Vitka’s story being unknown to many, the writing is able to provide full context for the uninitiated without resorting to unnecessary exposition in the dialogue; you feel compelled to find out more without feeling lost in the plot.

The play skillfully weaves several themes together: artistic independence, the struggle for women to be heard, and the strains placed on families by the political situation of the 1930s. At the centre of all these themes is Vitka, a precocious talent whose passion, ambition and eroticism clash awkwardly with the macho environment of 1930s classical music. She is portrayed by the outstanding Tereza Marečková, the indisputable star of the show, who deservedly won the Czech Theatre Critics’ Award for Best Actress for the performance.

All of these themes are balanced throughout and given equal treatment, leaving lots of questions for the viewer to think about later. The feminist message is self-evident in the play – one memorable scene sees Vitka unleash her rage on a sexist orchestra with a chainsaw when they fail to respect her – but the male characters are not simply props; Dušan Hřebíček’s subtle performance as Bohuslav Martinu, the older man hopelessly unable to control a doomed obsession, provides an interesting subplot.

At the beginning of the second half, the narrative seems to sag slightly, as it relates a tumultuous and chaotic period of Vitka’s life characterised by distance, political tension, and the power struggle between her many lovers. However, the final third brings this compelling story to a tragic and dramatic denouement, as a force of nature who has refused to be put in a box by any of the men in her life finally succumbs to greater forces beyond her control. At the end of the play, Vitka remains an enigmatic figure, whose ambitions have been frustrated by the energies expended fighting for her independence, whether in life, love, or art. If she had lived, she would have become one of Czechoslovakia’s most famous women, and we may have been able to experience the true extent of her creative vision. As it is, Kateřina Tučkova and Divadlo Husa na provázku deserve full credit for this captivating tribute to her legacy.

Stay tuned to Brno Daily for all the information about Divadlo Husa na provázku’s upcoming season of English-friendly shows!

https://brnodaily.com/2019/09/17/culture/katerina-tuckovas-vitka-brings-the-story-of-brnos-tragic-neglected-musical-genius-to-mesmerizing-life/https://brnodaily.com/wp-content/uploads/2019/09/vitka1-husa-na-provazku-credit-jakub-jira-Copy-1-1024x620.jpghttps://brnodaily.com/wp-content/uploads/2019/09/vitka1-husa-na-provazku-credit-jakub-jira-Copy-1-150x91.jpg2019-09-17T16:13:00+02:00Jack StephensArt & CultureBrno,Culture,English-friendly,Events in Brno,History,Reviews,TheatreDivadlo Husa na provázku’s experimental, innovative stage production was the perfect match for this dramatic parable of feminine strength and independence in a dangerous era hostile to both of those concepts. Photos: Vitka by Jakub Jíra. Brno, Sep 17 (BD) - Vítězslava Kaprálová (1915-40) was among the most promising...Jack Stephens jack.stephens50@gmail.comAuthorA writer and English teacher originally from London who has lived in Brno since 2011, interested in politics, low culture, and all things strange and/or Czech.Brno Daily

A writer and English teacher originally from London who has lived in Brno since 2011, interested in politics, low culture, and all things strange and/or Czech.
View all posts by Jack Stephens →
« Filharmonie Brno Launches Its 64th Season with Piano Virtuoso Elisabeth Leonskaja This Thursday
Large Protests Planned Across Slovakia On Friday In Response To Continuing Corruption Revelations »