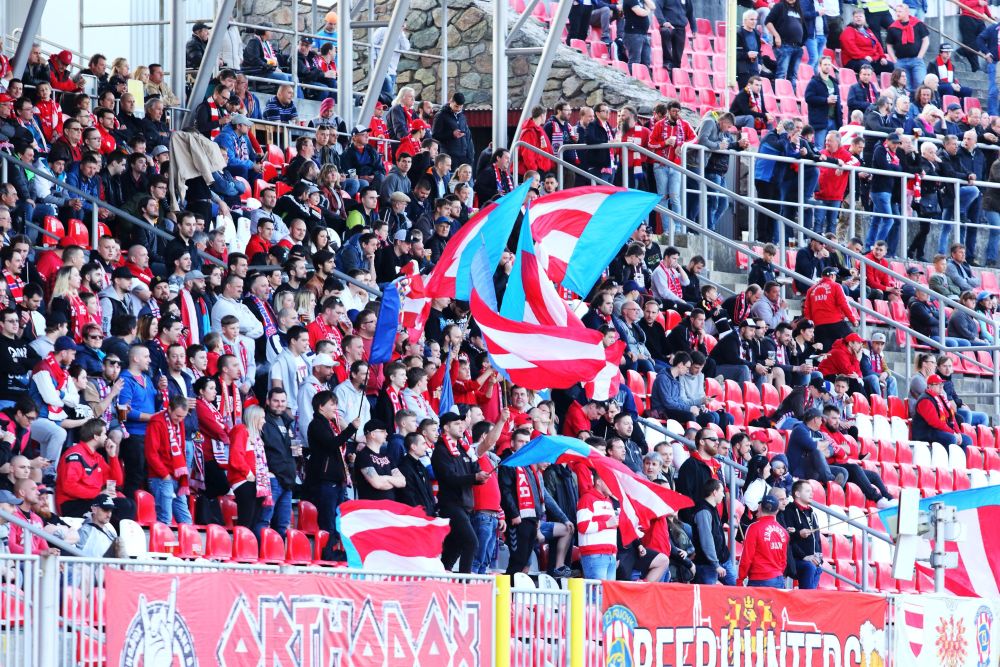 The pride, passion and belief will return to Městský fotbalový stadion Srbska when FC Zbrojovka takes the field this Friday for another year in the Fortuna: Narodni Liga. Photo credit: www.fczbrno.cz.

FC Zbrojovka, which is considered the overwhelming favorite to win the Fortuna: Narodni Liga, stumbled out of the starting gate and required a late-goal to salvage a point in their opener, a 2-2 tie at FC Sellier & Bellot Vlašim on Friday.

The team can get back to winning form, which it enjoyed at the end of last season and throughout the pre-season games, when it opens its home season against FK Pardubice on Friday at 7 p.m.

Tipsport lists Zbrojovka as the 1.8-to-1 favorite to win the league. That means a 1,000kc wager would result in winnings of 1,800kc, a profit of only 800kc. Clearly the odds makers and many gamblers are confident about the team returning to the Fortuna Liga after two second-league seasons.

In the opener, Jakub Šural put Zbrojovka on the board in the 21st minute. The lead didn’t last and Pavel Eismann was forced to save the point with an equalizer in the 88th minute.

FC Zbrojovka finished last season with six straight wins, outscoring its opponents 21-3 and pushing their goal total to a league-high 63. The team finished third in the standings with a final record of 17-6-7 and 57 points. They earned the right to play 1. FC Příbram for a chance at promotion, but, after a 3-3 tie at home, they managed just one shot on goal in a scoreless tie on the road, thus sealing their fate with another season in the second league.

Midway through the first half of SK Líšeň’s first game in the Fortuna: Narodni Liga on Saturday, the main section of Stadion v Líšni was sold out. The late arriving fans, who continued coming well into the second half, were forced into the newly constructed visiting section, where there were more babies (two) and toddlers (six) than visiting fans (zero).

In the end, a team-record crowd of 1,542 celebrated their team’s advance into the second league. Unfortunately, though the play was entertaining, the result — a 2-2 tie against FK Varnsdorf — was worth only a point in the standings.

Líšeň took the lead on its first shot when captain David Krška put the home team on the scoreboard in the seventh minute. Líšeň, buoyed by the partisan crowd, controlled the first half. The only Varnsdorf shot, unfortunately, was a goal. Nevertheless, in the 37th minute, Guy Reteno Elekana gave Líšeň the halftime lead.

Varnsdorf, which finished sixth in the second league last year, returned to the field full of life and caught Líšeň on its back foot with the equalizing goal.

Many late attempts by the home team proved ineffectual in the closing minutes.

Líšeň earned promotion to the F:NL when it finished atop the standings for the Fortuna MSFL league with a record of 18-7-5 last season.

The Líšeň stadium was fixed up significantly to fit the standards of the second league, including a brand-new visitor’s sections (which will be pushed to the extreme when FC Zbrojovka visits in mid-April), new padding along a sidewall, additional facilities for the press and VIPs, additional netting and the installation of turnstiles at the entrances.

Líšeň travels to MFK Chrudim on Saturday for a game at 10:15 a.m.

The two top baseball teams in Brno met on Sunday. Draci Brno were guaranteed to reach the postseason. Cardion Hroši Brno had not won in more than a month. Yet, with some bragging rights on the line, there was more than enough pride for which to play.

And, the home-team Hroši were able to squeeze out a hit here and a aggressive base running there in order to win, 4-2.

There is one more weekend of games left in the Top6 phase of the season.

The Draci (10-8) will finish third and advance to the best-of-three Wildcard Series on Aug 2-4. Kotlářka Praha (7-11), which has lost four consecutive games, does not have enough games to challenge for third place.

Arrows Ostrava (13-3) and Eagles Praha (13-5) will fight it out for who will advance directly to the best-of-five Czech Series on Aug. 16-18 and 23-25 and who will have to play the Draci for the right to play in the Czech Series.

The Draci are 21-time champions. They have played in 25th consecutive Czech Series.

They Draci finish the season on Friday at Tempo Praha (5 p.m.) and Saturday at home against Arrows Ostrava (2 p.m.)

The Hroši (5-12) have been eliminated from postseason competition.

In the lower league, Technika Brno is fifth with a record of 6-5.

The Prague second team is undefeated in its first three matches. They beat Brno by six wickets.

Brno is now 0-1 early in the season. The first scheduled game was abandoned due to rain.

The next game for Brno will be at Prague Cricket Club, this time against the first team, which is 2-1 early in the season.

The top mountain bikers in Europe will descend upon Brno this Thursday to Sunday for the UEC Mountain Bike European Championships.

Entry is free on all four days so organizers expect more than 15,000 viewers to watch the battles for points to qualify for the Summer Olympic Games 2020 in Tokyo.

The main grandstand is behind the Anthropos Museum in Pisárky. The course goes up and down the hills over the Pisárecký Tunnel, and between Pisárecka Street to the south and the area above the Riviera complex to the east.

There have been several domestic events on the course, but this will be the first European-level event.

“After the Czech Cup race in 2018 the track was completely redesigned,” said Lubomír Vidlák, the race director and the chairman of the organizing committee, who noted that the downhill “Extreme” section will be a highlight of the course. “Three of the most attractive sections are in close proximity, allowing viewers to see racers multiple times in one round. The other sections will be visually appealing for the viewers as well. During the reconstruction, we tried to make other interesting parts of the track accessible to the audience and we paid great attention to the surroundings.”

In all, 461 riders from 32 countries will compete for nine titles in the Team Relay, Eliminator, Elite Cross-Country and Men’s and Women’s Juniors and Under 23s. There are also Master’s events.

The elite categories will compete on Sunday.

The schedule for the races is as follows:

The CzechGP Experience is Coming

The CzechGP is just days away and it is not too late to get tickets to watch the top motorcycle racers in the world rocket around the Masarykův okruh on Aug. 2-4.

The rest of the Top 5 finished within three seconds:

The racetrack experience includes giant screens, refreshments and merchandise stands. Expect hot weather. Special bus lines will operate for free to get people to the site. Parking lots for cars and motorcycles will also be available.

Tickets are still available. Gallery Vaňkovka, until the end of the month, will have tickets at pre-sale prices. Gold and Silver tickets are available.

Tickets can also be purchased either in person at the TO JE Brno information center on Panenská Street on the ground floor of the Domini parking house, or online at czechgp.com and gp.ticbrno.cz.

A connoisseur of the unpredictable and unscripted drama of sports.
View all posts by Bruno Zalubil →
« Renovation of Rondo Sports Arena Completed this Month
Traveling Around the World: an Employee’s Experience at Lufthansa InTouch Brno »