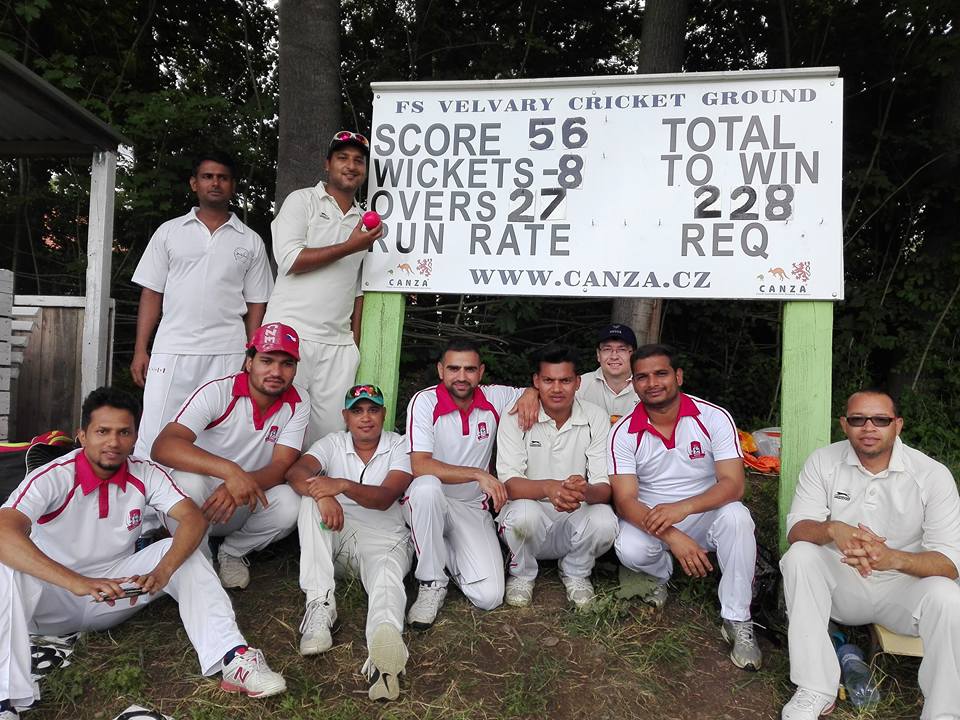 The Cricket Grounds in North Brno washed off a home match last weekend, but play will return this Saturday with perhaps the biggest matches of the T20 season.

“We had a huge flash flood,” said Brno Cricket Club team captain Somesekhar Banerjee. “It put our ground under water but we should be able to play on it this weekend.”

The first team hosts Prague Cricket Club in a rematch of the opening weekend, when Brno lost in Prague in front of an audience that included the Indian Ambassador to the Czech Republic.

This match on Saturday also has implications for the league title, although the chances are long that Brno will finish on top. Prague is 6-1 in seven matches. Brno is in second with a record of 5-3, meaning that Brno needs to win Saturday and hope for a lot of help from other teams. Last year, these two teams finished one-two in the standings.

“We have a couple of new players who did not play in the first match against Prague,” Banerjee said. “Hopefully that will be enough for a win.”

Last weekend, the first team was forced to travel to Prague because of the state of the Brno Cricket Grounds after a night of torrential rain. They lost. Brno scored 118 in 18.3 overs. Prague CC, second team, scored 151 in 20.

The Brno Cricket Club second team (4-2) will be in a slightly better situation when they host Bohemians Cricket Club (7-1) at 11 a.m. on Saturday. They, too, need to win to keep their title hopes alive.

The entire day will be festive with a family atmosphere. It is free and open to the public.

The longer, T40 season starts in the second week of July.

And They’re Off: Brno Racing is Saturday

Day 2 of the 2019 horse racing season at Brno Dvorská will commence with a first race post time of 2 p.m. on Saturday. There are five flat races and three steeplechase races on the card.

Three will also be pony races, carriage rides, horse rides and many refreshments.

Admission is 60kc for adults and 30kc for children. The program is 50kc.

Parking costs 20kc, but Bus No. 48 is an easy option from Hlavni nadrazi. It leaves at 10 minutes after every hour. Get off at the stop named “Vlčková”; it is 24 minutes away.

Lokomotiva Finishes Season with a Flourish

Lokomotiva Brno-Horni Herspice struggled during much of the past two season of play in the top women’s league. But they finished their 2018-19 campaign with a flourish:

• The defense of their first-league status and

• the Junior Czech Cup won by the second team, the organization’s future stars.

Lokomotiva, the first team, finished the season on Sunday with a 3-1 victory in Plzeň. FC Viktoria Plzeň is the team that, when it won 0-5 in South Brno, dropped the Lokomotiva to a significant low point, with disgruntled players and a discombobulated head coach.

Yet, since that home loss on May 11, Lokomotiva rebounded to beat FK Dulka Praha, 5-0, to ensure their top-league status and then win again against FC Hradec Králové, 3-0.

Then they finished the season with redemption in Plzeň. Desana Dianišková opened the scoring early in the first half. Anna Pušková (60th minute) and Šárka Krištofová (70th minute) built the lead to three goals before the defense allowed Plzeň on the board.

Mark Your Calendar for the Stars Game

Brno will be the site of a unique baseball experience on Friday, June 21, when Peter Moylan, a right-handed pitcher with 12 years of Major League Baseball experience, will face the Czech national team.

The exhibition is at MBS and starts at 7 p.m.

The host Brno Draci went undefeated in group play and dominated in the semifinals, but got shut out by Voith Heidenheim H. of Germany, 0-3, in the finals of the C.E.B. Cup last week.

With the Stars Game and the Prague Baseball Week (25-28 June), the Czech extraliga will take close to three weeks off after this weekend.

In the lower bracket, Technika continues to struggle. They are winless in four games.

The Brno Sígrs lost 26-11 at Pilsen Patriots on Saturday and the Brno Alligators lost 56-14 at the Aquaponik Ostrava Steelers on Sunday in a tough weekend for American Football from Brno.

The Sígrs (4-4) slipped to third in the Eastern Division and complicated their postseason hopes. They host division-leader Ostrava (6-2) on Saturday at 3 p.m.

The Alligators (0-8) are last in the Eastern Division, but they would help their crosstown rivals considerably if they were able to beat the second-place Vysočina Gladiators (5-3) on Sunday at 4 p.m.

The two local teams will meet in the Battle of Brno II on June 22.

A connoisseur of the unpredictable and unscripted drama of sports.
View all posts by Bruno Zalubil →
« Czech Government Approves Increase In Funding For Brno MotoGP
Two Men Accused Of Racist Attack On Czech MP Given 15-Month Conditional Discharge »