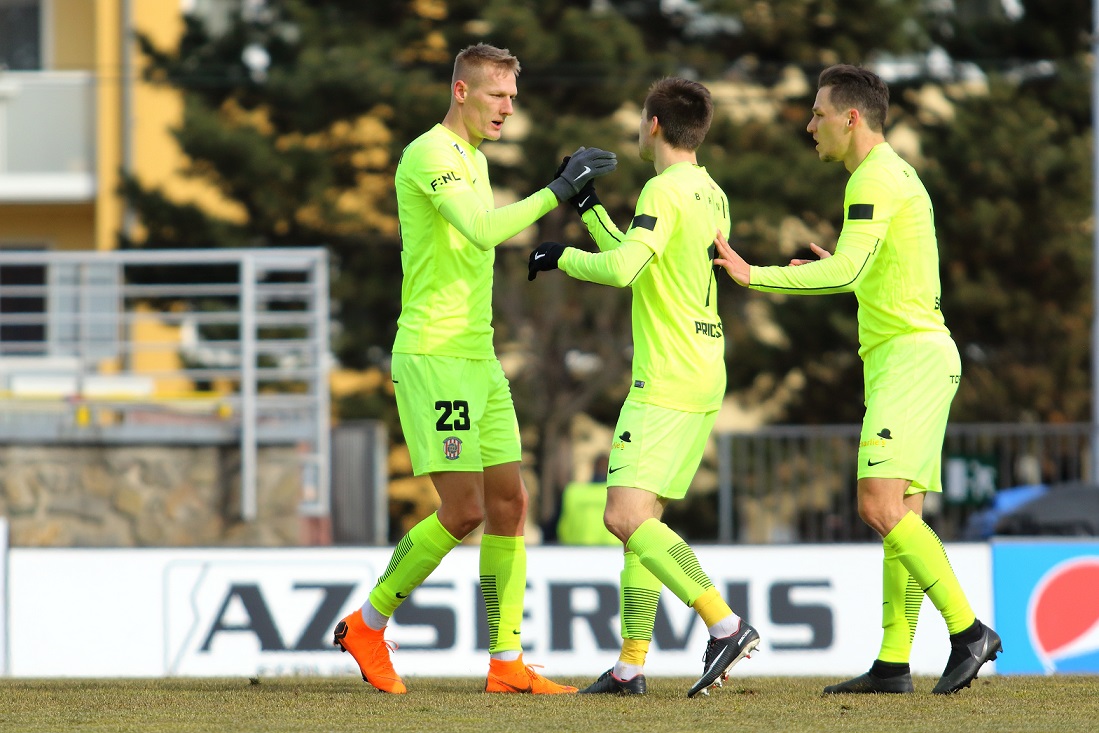 Zbrojovka has gone 4-1-1 in the spring half of the Foturna:Narodni liga season. Michal Skoda (left) is a big part of the resurgent offense.  Photo credit: Petr Necas, FC Zbrojova.

FC Zbrojovka takes their field tonight (Wednesday) against Pardubice as they continue to battle for a return to the top football league in the country. On Sunday, they travel to Varnsdorf.

Two wins in the next five days could put Zbrojovka in a prime position to finish third in the league and have a chance to rise above the second league.

The Sunday game at Varnsdorf starts at 5 p.m.

SK Dynamo Č. Budějovice (17-2-3, 53) appears to be in a good position to win the league and automatically advance into the Fortuna:Liga. FC Vysočina Jihlava (14-5-4, 47) has a solid jump in second place and the right to play the 15th-place team from the top league in a home-and-away series. Third place appears to be Zbrojovka’s only hope. If they could finish the Fortuna:Narodni Liga season in third, they would face the 14th-place team from the Fortuna:Liga in a home-and-away series for a spot in the top league.

Brno has scored points in every game during the spring half of the season, except when they blew a two-goal lead at league-leaders SK Dynamo Č. Budějovice. They battled FK Ústí nad Labem (11-3-8, 36) to a scoreless tie two weeks ago. Other than that, they are 4-1-1 for 13 points.

FC Lokomotiva-Horni Herspice made a significant step forward in preserving their place in the top women’s football league of the Czech Republic when they beat FC Hradec Králové, 5-1, last Saturday.

Desana Dianišková scored the first four goals for Lokomotiva. Her first — in the 16th minute — tied the score at 1 apiece.  Then, in the second half, as the pressure to save the season was increasing with every minute, she added goals in the 61st, 64th and 76th minutes. Tessa Andujar finished the scoring for Brno in the 90th minute.

Lokomotiva (3-3-7) added three points and solidified their hold on seventh place in the league with 12 points. FC Hradec Králové (3-0-10) is last with nine points and the real possibility of relegation to a lower league at the end of the season.

Lokomotiva actually has a good chance to move into the top four in the standings when they travel to Uherske Hradiste on Friday to play sixth-place 1. FC Slovácko (4-1-7, 13) at 6 p.m. In February, Horni Herspice beat Slovacko with a dramatic come-from-behind effort to advance in the Czech Women’s Football Cup. If Lokomotiva can add another three points with a victory in league play, they would mostly likely jump three spots because current fourth-place team FC Viktoria Plzeň finishes the regular season at league-leading-scorer SK Slavia Praha.

The quest for a Golden Triple was ended on Saturday at DRFG Arena when HC Kometa lost Game 6 of the Tipsport extraliga semifinals to Bílí Tygři Liberec, 2-5.

Nevertheless, the home crowd appreciated and acknowledged the fact that, though the two-time defending champions were eliminated, they showed that they are among the elite of the league. The fans cheered and chanted and held their blue-and-white scarves aloft with pride.

“I’ve never experienced this after a lost match,” HC Kometa defender Ondřej Němec told hc-kometa.cz. “I think I’ve experienced a lot in my career, but I will never be able to experience it again after losing a match.”

Liberec, the No. 1 seed in the playoffs after leading the regular season, advanced to the finals with a 4 games to 2 series victory.

In this postseason, Kometa swept Hradec Králové in four games to advance to the semifinals to face Liberec. Three of the six semifinal games were pushed into extra time.

The next season begins in September.

The Žabiny Brno women’s basketball team has increased their level of play to stay alive in the ŽBL postseason and they will need to find another level of skill and power and strategy to beat undefeated and multiple-time-defending-champion ZVVZ USK Praha.

Žabiny Brno swept Loko Trutnov in three games and then beat KP Brno, 3 games to 2, in an exciting rivalry seminfinal series. The Žabiny are back in the Finals for the first time since 2013-14. Perhaps all of the travel to international competitions has paid off because the team showed a steady confidence throughout the rivalry series with KP Brno despite losing top scorers Kateřina Zohnová (12 points a game) and Petra Záplatová (12.8) to injury.

KP Brno Falls Behind in Series for Third Place

KP Brno, the runner up last season, dropped behind Sokol Nilfisk H. Králové in the best-of-five-games series to decide the third-place team of the 2019 ŽBL.

Home court has not proven to be an advantage in this series because the visiting team has won each of the three games. Earlier, Hradec Králové won Game 1, 69-62, in Brno and KP Brno won Game 2 at Hradec Králové, 77-66.

Game 4 is in Hradec Králové on Friday. Game 5, if necessary, would be back in Brno next Tuesday.

After an up-and-down season that started strong, slumped enough to prompt a head coaching change, recovered enough for advancement into Group A1, and spurted forward with two wins to provide hope in the early stages of Group A1 play, egoé Basket Brno could not get traction against USK Praha and lost the pre-Playoff Series, 2 games to 1, and finished with an overall record of 11-25.

It was like the alley-oop that the team used throughout the season: a shocking display of offensive perfection that, when it worked, gave a glimpse of what the team could be, but, in the end, was not enough to lead the team to victories.

“The USK team was significantly better in both matches,” said Brno head coach Christianos Chougkaz, who coached in Prague last season. “For us, after the first two major victories in Group A1, the last month was a very difficult time, as we lost four players and it was not easy to work as we imagined.”

Reggie Keely (21 points), Davell Roby (19 points) and Deremy Geiger (17) — the American trio who served as the core of the team throughout the season — all scored higher than their season averages as they provided more than 80 percent of the offensive output in the final game of the season.

Earlier in the week, egoé Basket Brno finished play in the advanced Group A1 with a 3-11 record, losing to perennial top team ČEZ Basketball Nymburk, 60-111, at home last Wednesday. The game was not significant for postseason seeding, so Chougkaz used the game to rest his starters, including the three American team leaders, and give his bench playing time.

It was not enough for this season, but the extra game time and the experience of playing against the top teams of the Czech Republic could pay off next season.

“Surely I can’t forget the five months of great work with my team,” Chougkaz said. “Although we are disappointed now that we did not reach the first quarterfinal in the club’s history, we still achieved great success.”

Draci Brno maintained their dominance of the Czech extraliga baseball league when they swept Olympia Blansko and improved their record to 9-0 through three weeks.

Cardion Hroši Brno are 6-3. Technika beat Skokani Olomouc, 8-9, on Friday to get their first win. They are 1-8.

Unfortunately, it was not enough.

The visiting Vysočina Gladiators scored 22 unanswered points and left Brno with a 49-50 victory over the Sígrs on Sunday.

The day before, on Saturday, the Brno Alligators dropped their second game of the season, 12-39, to the Pardubice Stallions.

Both the Brno Alligators (0-2) and the Sígrs (0-1) play on their shared home field, Ragby Bystrc, this weekend. On Saturday, the Alligators host the Prague Lions and on Sunday, the Sígrs host the Pardubice Stallions. Both games start at 2 p.m.

The Czech Cricket League begins April 27 with another matchup with Prague CC. Brno, the runner-up in 2018, starts the Czech T20 summer league at Chateau Field, Vinor, at 3 p.m. The opening match is expected to attract executives of the International Cricket Council and the Indian Ambassador to the Czech Republic.