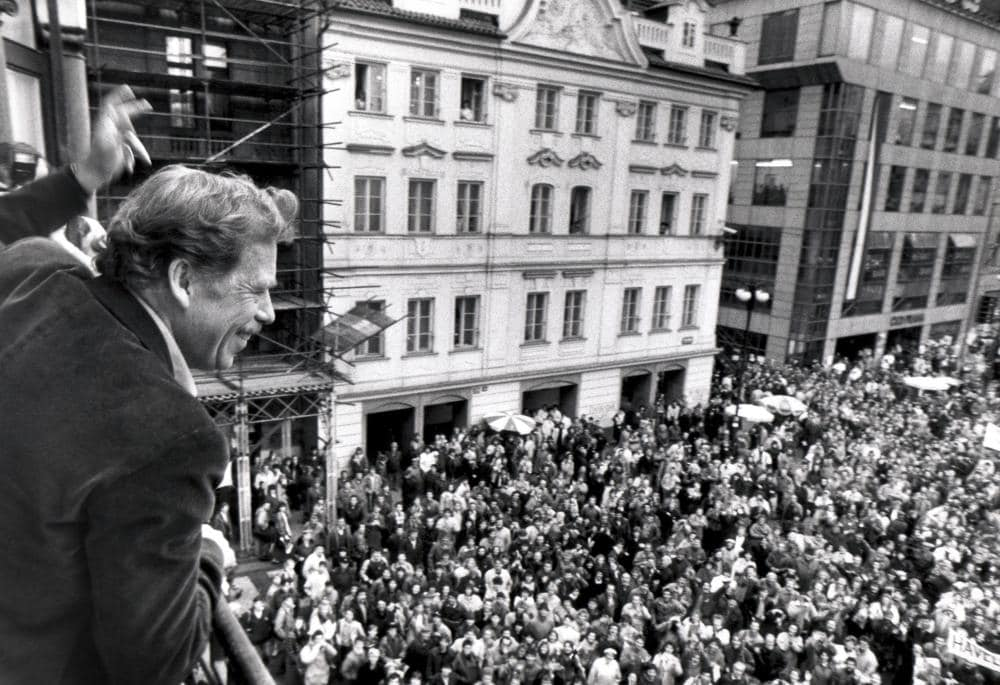 17 November is the anniversary of the Velvet Revolution, which ended Communism in Czechoslovakia and restored democracy. Photo credit: Milion chvilek pro demokracii, via Facebook.

Prague, Nov 18 (CTK) – The Concert for Future commemorating the national holiday in the Czech Republic culminated with a performance by the Russian dissident group Pussy Riot in a crowded Wenceslas Square in Prague yesterday.

The band called for a rebellion, denouncing Russian President Vladimir Putin for mixing secular and religious power, for corruption, for the suppression of human rights, and for a false patriotism which has found support from a great number of Russians.

The group also told the audience that some Russians are still aware of the protest of the eight courageous people who came to Red Square in August 1968 to protest against the occupation of Czechoslovakia by Warsaw Pact troops.

Pussy Riot member Maria Alyokhina, who according to moderator of the concert had breached the terms of her house arrest to come to Prague, also mentioned the amnesty she was granted just three months before the end of her prison sentence of almost two years, having been persecuted for her various civic activities. In her performance, she described her imprisonment.

She asked the audience whether being released was any start of freedom. During the concert there was an appeal for the release of Russian political prisoners whose names were screened on the rostrum.

At the close of the performance, there was a show of support for Ukraine.

A Democratic Show of Strength

The Concert for the Future was attended by thousands of people. The program, which included multiple acts promoting the need for democratic values ​​and civic solidarity, mainly consisted of music. The Czech national anthem was also played.

The organisers read a message from the Tibetan Dalai Lama, and a petition was presented to the government, demanding support for Ukraine, more attention to the climate crisis and the need for education reform.

The crowd was greeted by several Ukrainian women, who thanked the Czech Republic for supporting their country in the war.

The Concert for the Future has been held since 2016. It is part of the Festival of Freedom, an open grouping of NGOs staging the celebrations of 17 November, a Czech national holiday.

March for Democracy and Ukraine

Coinciding with these events, several thousand people took part in a silent march for democracy in Prague yesterday, also expressing support for Ukraine, currently under intense aerial attack by Russia. The people carried Czech and Ukrainian flags and some of them also the EU flag.

Banners included the slogan “It is not enough to remember” or a crossed out Communist hammer and sickle with the inscription “Never again.”

The marchers included some Russians who condemned the war and the current regime in Russia.

The organisers said it was high time to start uniting the divided Czech society and to return national symbols of the Czech Republic to the hands of all citizens.

“Like the rest, we condemn the murdering of innocent people in Ukraine, we are against the war. This is why we support the material and military aid to Ukraine. We believe that if there is a failure of diplomatic talks, there is no other way towards peace,” they wrote in their invitation to the march.

The march set out from Na Slupi street and reached Jungmannovo náměstí just after 4pm. Most of the marchers then continued to Wenceslas Square to join the Concert for the Future.

The rally was held with the support of the Million Moments association. Earlier today, it prepared an installation in Prague warning of the upcoming presidential election.

From a boat on the Vltava River, a large question mark was suspended with the help of a balloon that could be seen when looking at Prague Castle, the seat of Czech president.

Meanwhile, thousands of demonstrators protested against the government by marching through Prague to the headquarters of public broadcaster Czech Television.

Organiser Ladislav Vrabel said before the event that it was to demand “a live broadcast on CT.”

The protest march disrupted the transport in some places in Prague.

The demonstrators gathered near the Main Railway Station, before moving along the main thoroughfare across the Nuselsky bridge and on to the Kavci hory CT headquarters.

The speakers criticised the broadcaster for a lack of impartiality, arguing that during the COVID pandemic it had overstressed the vaccine, and during the war in Ukraine, it provided little space for Russian views.

CT tweeted that the demonstrators had demanded that it broadcast a ten-minute speech by their representative on the CT1 and CT24 news channels.

“It does not work like this,” CT tweeted on Wednesday. “The CT schedule is determined by rules, a code and routine steps. Not by any pressure. CT cannot and will not broadcast any speeches that are demanded in this way.”

The marchers carried Czech flags and banners saying “CT belongs to all” and “Freedom ends where CT signal starts.”

They whistled and chanted “Resign!” and “Shame on the government”. Some of them carried the flags of the extra-parliamentary far-right party Trikolora.