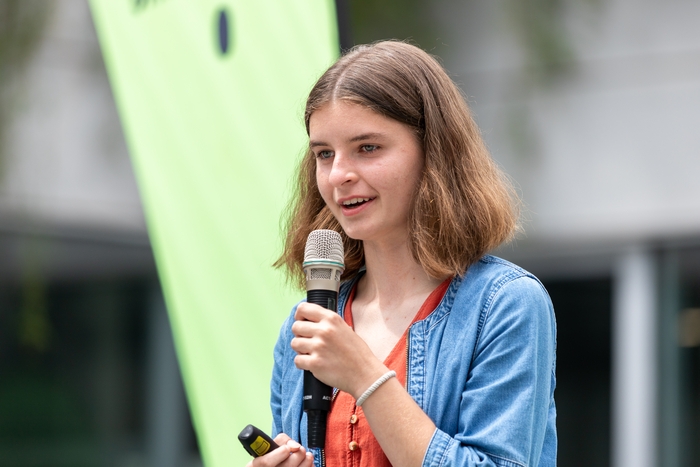 The first ever Czech national round of the prestigious Stockholm Junior Water Prize (SJWP) competition, which brings together high school students interested in water and its sustainability, was won by Cécile Čechová, a student from Křenová Gymnázium in Brno. Photo credit: mendelu.cz

Brno, 8 June (BD) – The jury was impressed by Čechová’s work with diatoms, which she used to analyse water quality assessment. The full title of the paper is “The use of diatomology in paleoecology with an example of a study of the spring du Loup Bourrou at the Bibracte archaeological site in France”.

According to one of the judges, Radovan Kopp from Mendel University (MENDELU), she chose a very difficult topic, especially for a high school student. “The results can tell a lot about the history of the site,” said Kopp. “In addition, in today’s final round the student demonstrated the best presentation skills of the contestants, which will be needed in Stockholm.” The only criticism the jury had of the winner was that she had not studied the latest literature. She will now go on to the main competition in Sweden at the end of August.

18-year-old Čechová, whose favourite subject is biology, plans to explore the topic further in the coming weeks. “I don’t take the final in Stockholm as stressful. It will be a great, incredible experience to try an international competition in English,” she said. She found out about the competition through friends who work at MENDELU. “Nature fascinates me; when I start something, I am used to doing it 100%,” she added.

The SJWP ceremony has been held annually since 1997 and is a part of World Water Week, which runs from 23 August to 1 September. The prize is presented to the winning student or team of students by the patron of the prize, Crown Princess Victoria of Sweden. Thanks to MENDELU, the competition has returned to the Czech Republic for the first time in a quarter of a century.

Over the years, many ideas that started as SJWP projects have turned out to be important innovations that have changed the lives of the participants and their communities. Many previous winners have gone on to successful careers in the world of water and have testified that the competition has helped spark their interest in science and influenced their career choices.

“The issue of water is topical in the age of innovation and climate change. Teams of scientists are working on it at our university, and I am glad that the younger generation is also thinking about it. Water is life, and its scarcity will affect all of us in the future and the young generation in particular,” said Jan Mareš, Rector of MENDELU.

Čechová will represent her project, her school and the whole Czech Republic at the International Round in Stockholm. The 2021 SJWP winner was Eshani Jha of the United States, a student at Lynbrook High School in San Jose, California. She has been researching how to remove contaminants from freshwater in a simple and cost-effective way.

https://brnodaily.com/2022/06/08/brno/brno-student-to-represent-the-czech-republic-at-the-stockholm-junior-water-prize/https://brnodaily.com/wp-content/uploads/2022/06/cechova_mg_1624.jpeghttps://brnodaily.com/wp-content/uploads/2022/06/cechova_mg_1624-150x100.jpeg2022-06-08T08:02:01+02:00Ilaria BriziBrnoBrno,News,StudentThe first ever Czech national round of the prestigious Stockholm Junior Water Prize (SJWP) competition, which brings together high school students interested in water and its sustainability, was won by Cécile Čechová, a student from Křenová Gymnázium in Brno. Photo credit: mendelu.czBrno, 8 June (BD) - The jury was...Ilaria Brizi ilabrizi12@gmail.comAuthorItalian girl with a master’s degree in marketing and advertising. I love travelling, reading, writing, listening to music, but most of all I love having breakfast. Against cheese on tuna pasta.Brno Daily

Italian girl with a master’s degree in marketing and advertising. I love travelling, reading, writing, listening to music, but most of all I love having breakfast. Against cheese on tuna pasta.
View all posts by Ilaria Brizi →
« Sociological Survey Reveals Czech Citizens’ Perceptions of Brno In 2022
Concert of Traditional Music From Horňácko At Augustinian Abbey To Open “Brno and Its Temples” »