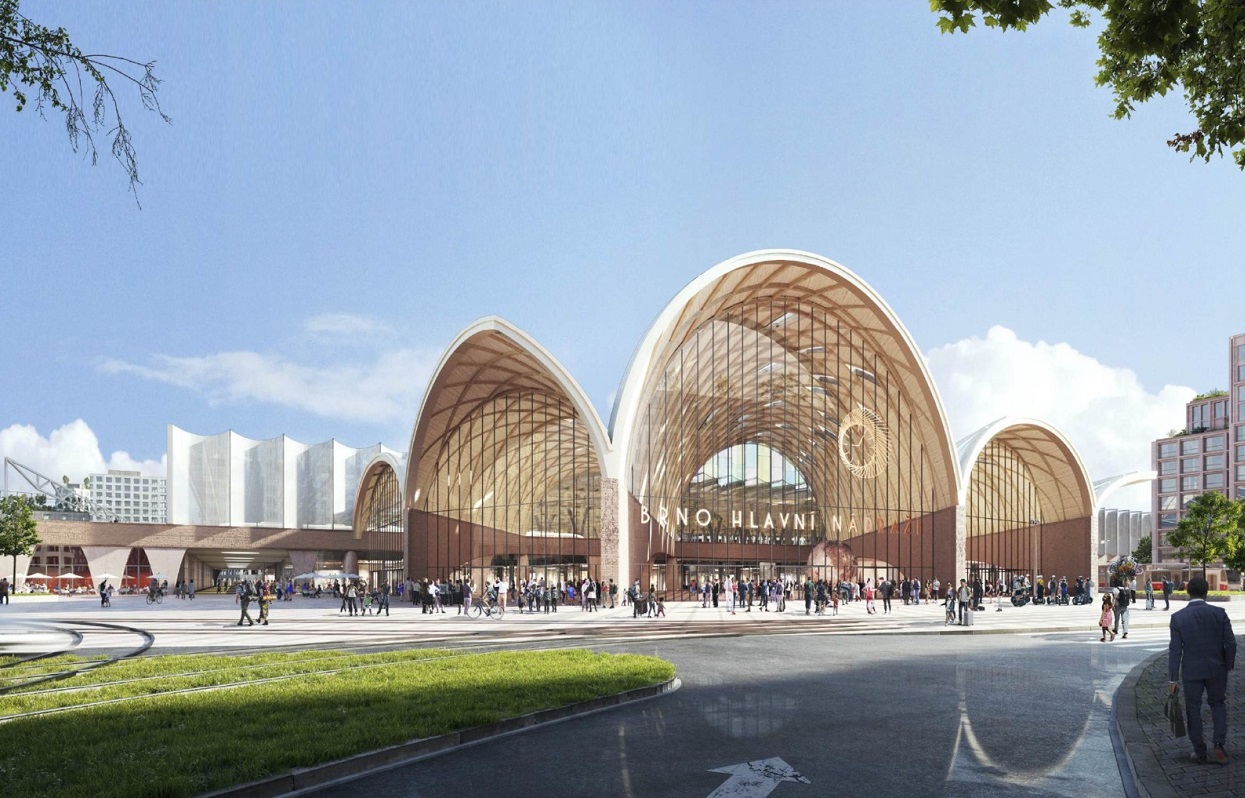 Following the largest architectural competition in the history of the Czech Republic, a design by the Dutch architect studio Benthem Crouwel has been chosen for Brno’s long-awaited new main train station and the surrounding Trnitá district. Completion of the project is currently estimated to be between 2032 and 2035. Photo Credit: Benthem Crouwel International B.V.

Brno, Jul 22 (BD) – The Brno City Architect’s Office has announced the winner of an international competition to select a design for the proposed new Brno international train station, to be built in the Trnitá district on the banks of the River Svratka, a few hundred metres to the south of the existing main station. The winning design was submitted by Dutch architect’s studio Benthem Crouwel, and chosen by an expert jury from 46 entries. The completion of the project is currently estimated for between 2032 and 2035, according to Mojmír Nejezchleb, Deputy General Director for Railway Modernization at the Czech Railway Administration.

A modern design for Brno

Benthem Crouwel Architects are the design studio behind award-winning train stations in Rotterdam, Amsterdam, and The Hague. According to the concept of the winning design, the new railway station will become a new gateway to the city and a positive impetus for the development of the emerging Trnitá district on the banks of the River Svratka. Brno residents will get a modern rail hub with sufficient capacity to guarantee further development of railway transport from the city.

The decision of the expert jury, which included architect Eva Jiřičná and urban planner Peter Gero, was approved this week by the City of Brno and the Railway Administration. As the organizer of the competition, the Brno City Architect’s Office will exhibit all the submitted designs at the Brno New Town Hall at the end of September.

According to Benthem Crouwel Architects, the design incorporates smooth integration into the city’s public transport network and enrichment of public life in the new district, intended to be a comfortable and easy place to live and travel, with a range of transfer options and an iconic design for the station itself that strengthens the identity of the city of Brno, while also being functional and looking like a train station.

“In the opinion of the jury, the winning design combines a reference to historic public buildings with a modern interchange and quality public space,” said the City Architect Michal Sedláček, a member of the jury. “It emphasizes the Brno genius loci and a careful assessment of the practical functioning of the new station building and its surroundings.” According to Sedláček, during the competition the jury recommended some refinements to the design to meet the strict requirements for the new station.

A new station, but an old problem

The existing main train station was first constructed in 1839 and is one of the oldest train stations in the country. Problems with capacity have been apparent for some time; a proposal to move the train station to the south was first suggested in the 1920s, and the idea has been revived several times since, but repeatedly blocked by unfavorable circumstances such as the Great Depression, World War II, or the occupation in 1968. As a result, capacity issues have increasingly affected the functioning of the station, causing regular delays for international routes that pass through Brno. However, its convenient location in the city centre means that many residents are attached to the existing station, and oppose its relocation.

On the other hand, the protracted lack of progress in building a new train station has caused severe obstacles for several other redevelopment projects planned for the area, both around the site of the existing station and in the Trnitá district. The project therefore has positive implications for the development of the urban centre. According to Brno’s Mayor, Markéta Vaňková (ODS), “The simplification of the network of tracks will remove obstacles and free up large areas in the city center for parks, recreation and more housing construction. The historic railway viaduct will become a promenade between the city center and the transformed waterfront. The new railway station will be surrounded on both sides by a high-quality public space, connected to the city center by a new boulevard with tree-lined avenues and a tram line.”

First Deputy Mayor Petr Hladík (KDU-CSL) added that the new station will improve transport in and out of the city: “One of the goals of the new station is to enable a quick transfer between train, bus and public transport in one place. This includes favorable conditions for the planned high-speed railway to Prague, Ostrava and Vienna. At the same time, comfort for pedestrians and cyclists, passengers and new neighbors of the station is essential.”

The international urban-transport-architectural competition to design the new station was announced on August 31st, 2020, and the jury chose the winning proposal and runners-up at a two-day meeting on July 1st and 2nd, 2021. It was the largest architectural competition in the history of the Czech Republic. Competitors had to design not just the station building, but a complete concept for adjacent public spaces, administration buildings, housing and public amenities, a bus station, public transport terminal and pedestrian connections, according to Filip Chvátal (KDU-CSL), Brno City Councillor for Spatial Planning and Development.

The competition was organized by the Brno City Architect’s Office with the City of Brno and the Railway Administration as joint contracting authorities, and took place in two phases. A total of 12 teams took part in the first phase, three of them invited directly, and the other nine selected by the expert jury from 46 submissions from international architect studios, including those responsible for stations in Vienna, Berlin, Rotterdam, The Hague, Bologna, London, and Birmingham. The 12 competitors in the first phase developed their proposals further, and four of them were selected for the second phase of the competition, where the designs were laid out in more detail.

The public will be able to view all the proposals from both phases of the competition at an exhibition in the Křížová corridor of the Brno New Town Hall. The exhibition will open with the winning team in attendance on September 30th, 2021. A large-scale model of the new Trnitá district will also be presented, which was used by the jury during its evaluation. The competition models of individual teams, with the building designs and adjoining public spaces, were inserted directly into the model.

https://brnodaily.com/2021/07/22/brno/winning-design-chosen-for-new-brno-main-train-station/https://brnodaily.com/wp-content/uploads/2021/07/NewRailwayStation_3_Credit_Credit_Benthem-Crouwel-International-B.V.-1024x656.jpghttps://brnodaily.com/wp-content/uploads/2021/07/NewRailwayStation_3_Credit_Credit_Benthem-Crouwel-International-B.V.-150x96.jpg2021-07-22T10:24:25+02:00Jack StephensBrnoNewsBrno,Construction,News,RepairFollowing the largest architectural competition in the history of the Czech Republic, a design by the Dutch architect studio Benthem Crouwel has been chosen for Brno’s long-awaited new main train station and the surrounding Trnitá district. Completion of the project is currently estimated to be between 2032 and 2035....Jack Stephens jack.stephens50@gmail.comAuthorA writer and English teacher originally from London who has lived in Brno since 2011, interested in politics, low culture, and all things strange and/or Czech.Brno Daily

A writer and English teacher originally from London who has lived in Brno since 2011, interested in politics, low culture, and all things strange and/or Czech.
View all posts by Jack Stephens →
« Repairs In Staré Brno Continue To Expand; Work On Mendlovo Nam. To Begin This Autumn
35% of Non-EU Citizens In The Czech Republic Are Overqualified For Their Jobs »