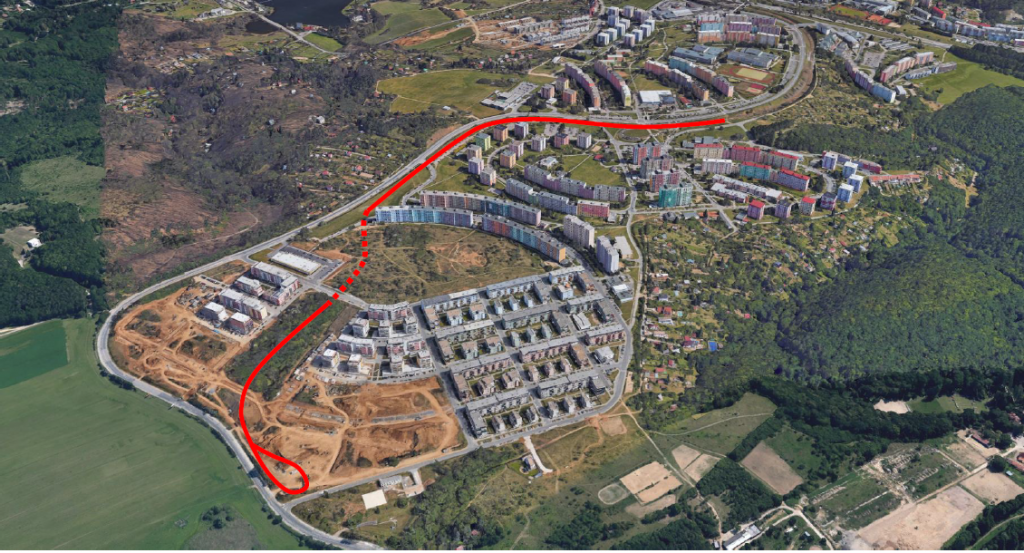 The City of Brno has agreed on a concrete plan for the tram line extension from Ecerova to Kamechy in Brno-Bystrc. The extended line will pass through a tunnel that has yet to be excavated. Three new stops will be added as part of the construction. Image source: Kopeme Za Brno.

Brno, Jul 1 (BD) – The plan to extend the tram network to serve Kamechy has been in the works for some time, but the specifics remained unclear. At a meeting last week, Brno City Councilors agreed on details of the plan; the line will extend from Ecerova to Kamechy, via two more new stops and a tunnel. The extension will cost an estimated CZK 2.3 billion.

The proposed 320-metre tunnel is a more expensive option than keeping the new line above ground, but according to David Grund (ODS), Council Member for Investment, the cost is worth the benefits: “Although this is an expensive option, the advantages, such as less noise pollution, the lowest traction power consumption, and the possibility of using the space above for other purposes, clearly prevail.” Three new stops will be created after Ecerova as part of the construction: Ruda, Ricenska and Kamechy.

The city has been looking to expand the tram line to Kamechy for a long time. According to Mayor Marketa Vankova (ODS), there is already a lack of parking spaces in the area, and the population in the area is expected to increase further as the neighborhood is developed. “The housing estate therefore needs better public transport connections so that residents have more options to travel to and from their homes. The extension of the tram line seems to be advantageous in a number of respects. The tram is independent of the road network, so there is less risk of delays than with buses, and trams will not make the roads busier the way buses do,” added Vankova.

When the idea for the project was first announced, estimates for the cost ranged from CZK 100 million to CZK 1 billion, with the first trams running on the extension in 2023, at the latest. With the new plan, the estimated cost has increased up to CZK 2.3 billion, and construction is expected to start in 2025 at the earliest. Representatives of the City of Brno said that “most of the cost should be covered by subsidies.”

https://brnodaily.com/2020/07/01/brno/new-tram-line-extension-in-brno-bystrc-to-run-from-ecerova-to-kamechy-via-tunnel/https://brnodaily.com/wp-content/uploads/2020/07/kamechy-tram-map-credit-kopemezabrno.cz_.pnghttps://brnodaily.com/wp-content/uploads/2020/07/kamechy-tram-map-credit-kopemezabrno.cz_-150x81.png2020-07-01T14:32:05+02:00Tessa AdamsonBrnoNewsBrno,News,Tram,TransportThe City of Brno has agreed on a concrete plan for the tram line extension from Ecerova to Kamechy in Brno-Bystrc. The extended line will pass through a tunnel that has yet to be excavated. Three new stops will be added as part of the construction. Image source: Kopeme...Tessa Adamson T.M.Adamson@hotmail.comAuthorExpat student from the Netherlands, passionate about writing, travelling, languages and politics.Brno Daily