Br(u)no: The Velvet Revolution Through One Faraway Mind 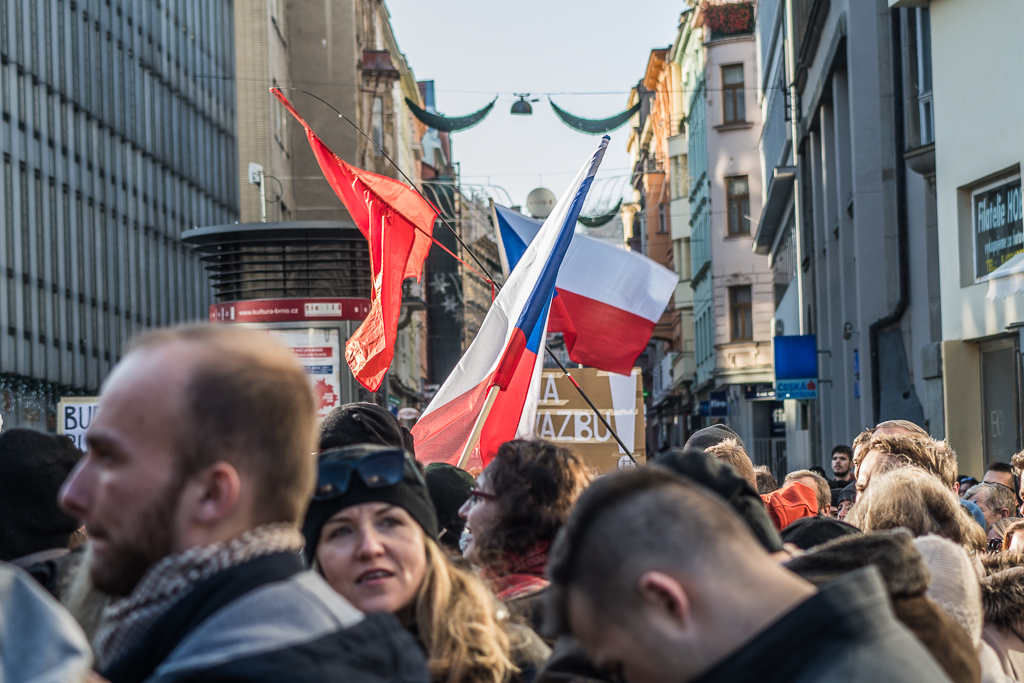 Whenever friends tease me about one of the many mistakes that I make while speaking Czech, I have a pat response: “Czech is not my first language.” I make sure to exaggerate my bad accent.

The truth is that Czech was my first language, and I purposely suppressed it.

Both of my parents left Czechoslovakia just before the Soviet Union sealed the borders in 1969. They met in Chicago. I was born a couple years later. They spoke Czech together, and Czech to me.

And I hated it. I was shy. I disliked the unwanted attention that two Czech-speaking parents attracted. People stared. I cringed and blushed.

Clearly, on a list of “things that can scar a youth” this barely registers when compared to the many actual traumas that determine one’s life course. Nevertheless, I feel that the special education classes that I was forced to attend to correct my Czech-accented pronunciation of English words (though they worked) contributed to the humiliation.

At around age 10, some friends visited me at my home. They were uncomfortable about my parents speaking in Czech together because they felt that they were talking about them. My friends said that they wouldn’t come around again.

That was it. It was such a petty and ridiculous thing, but it touched a nerve. I had had enough. I vowed to never speak Czech again.

Later, when I was a senior in high school, Czechoslovakia was suddenly in the news. It was mid-November 1989 and people were in the streets demanding to be freed of the yoke of Communism.

I resented the fact that I might be put on the spot and I feared being called upon in a class, which was one of my greatest anxieties. One teacher did ask me about it. I am sure that I blushed and gave a non-elaborative answer — something like “My parents are really happy” — and that was it.

Yet, I am nothing if not curious. The news came in drips and drabs in the pre-internet world but the newspapers has some stories. The Berlin Wall had fallen two weeks earlier and drawn the nightly news networks to Europe. The Velvet Revolution didn’t attract as much space, but the few images I saw on the news made an impression. Vaclav Havel was giving a rousing speech. Thousands of people were shaking their keys. My parents were emotional.

Revolutions bring thousands of people out into the streets. They can also happen in a faraway single mind.

Looking back at it now, I know that the Velvet Revolution started my return to accepting my Czech heritage.

A few years later, while in college, I purchased an edition of the “New York Review of Books” and devoured a long article about the Velvet Revolution. It was when I first started to think about actually living in the Czech Republic. Somewhere I have a journal with pages of plusses and minuses.

Steady and interesting employment kept me stateside, but I was slowly warming to the idea of moving. I remember thinking that, if a boss finally pisses me off enough, I’ll hop the next plane to Prague.

Whenever I participated in demonstrations, like the World Trade Organization protests (known as the Battle of Seattle) in 1999, the large demonstrations against the impending Iraq War in New York City in 2003 and so many other smaller ones, I always imagined that the feeling of communal rage was similar to that which the Czechs on Wenceslaus Square must have felt in November 1989.

The Velvet Revolution, even though it was so physically distant from me, had become, in retrospect, an important emotional marker in my life’s course. In a very real way, it rekindled something that I had not respected. Eventually, it helped to lay the foundation that brought me here emotionally and now even physically, where it feels that, 30 years after the fact, I truly belong.

Facebook Comments
https://brnodaily.com/2019/11/16/column/bruno-the-velvet-revolution-through-one-faraway-mind/https://brnodaily.com/wp-content/uploads/2019/11/Political-protests-against-Babis-Brno-November-17-2018-20-1024x683.jpghttps://brnodaily.com/wp-content/uploads/2019/11/Political-protests-against-Babis-Brno-November-17-2018-20-150x100.jpg2019-11-16T08:17:59+01:00Bruno ZalubilColumnBrno Expats,czech,Czech Republic,HistoryPhoto: Political protest in Brno last year. Credit: CG / Brno Daily. For illustrative purposes. Whenever friends tease me about one of the many mistakes that I make while speaking Czech, I have a pat response: “Czech is not my first language.” I make sure to exaggerate my bad accent. The truth...Bruno ZalubilBruno Zalubilbzalubil@hotmail.comAuthorA connoisseur of the unpredictable and unscripted drama of sports.Brno Daily

A connoisseur of the unpredictable and unscripted drama of sports.
View all posts by Bruno Zalubil →
« Video: Police Seeking Three Men That Beat a Shop Owner at Zvonařka and Threatened To Cut His Throat
Active Brno: Don’t Let Cold Keep You Inside »