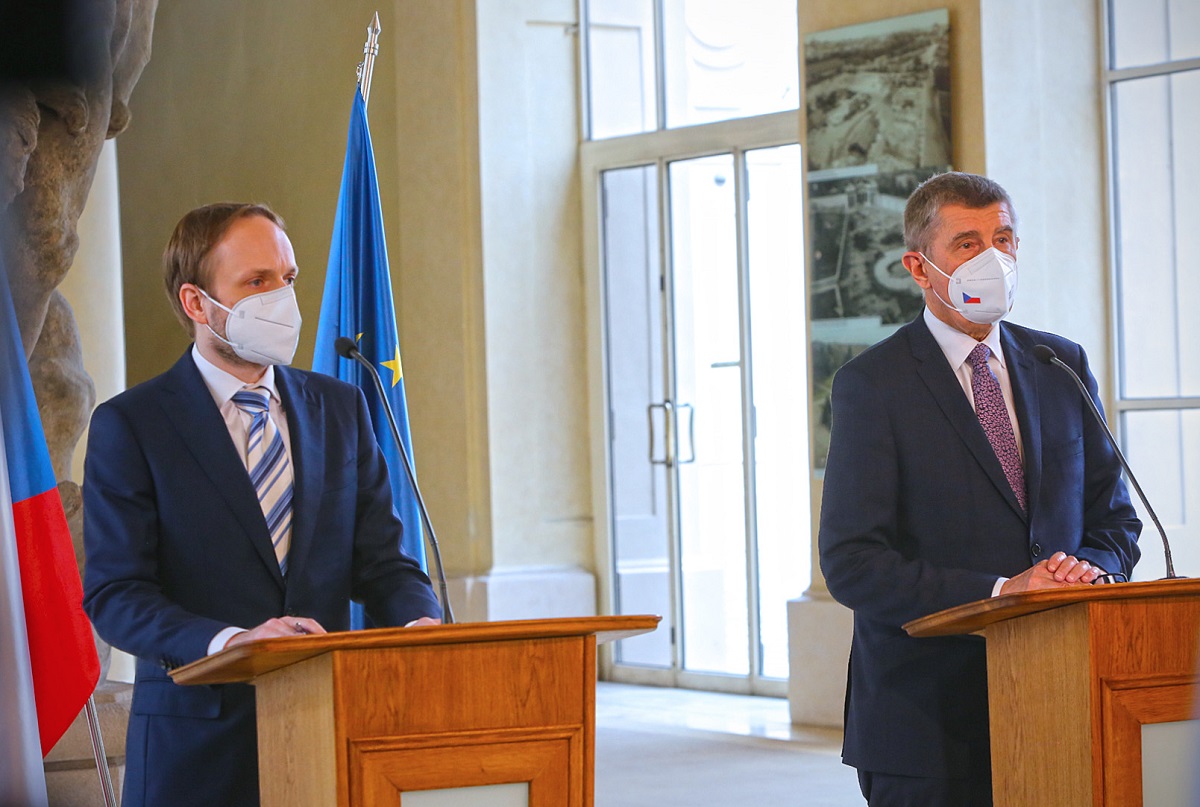 In an unprecedented diplomatic rift, the Czech Ministry of Foreign Affairs has expelled another 63 Russian diplomats from the Czech Republic. Yesterday NATO countries declared solidarity with the Czech Republic in connection with the explosions in the ammunition complex in Vrbětice in 2014, which Czech intelligence services say was carried out by the Russian military intelligence agency, GRU. Slovakia has expelled three Russian diplomats. Photo: Prime Minister Andrej Babiš and Foreign Minister Jakub Kulhánek at the press conference on April 21. Credit: Vlada.cz.

Czech Rep., Apr 23 (BD) – The diplomatic rift between the Czech Republic and Russia began last Saturday, when the Czech Republic expelled 18 employees of the Russian Embassy thought to be working for the Russian secret services. The expulsion followed intelligence reports that GRU agents had been responsible for two explosions in munitions warehouses in Vrbětice near Zlín in 2014. In retaliation, Russia expelled 20 employees of the Czech Embassy in Moscow.

The Czech government set a deadline of midday yesterday for the Czech diplomats to be allowed to return to the embassy in Moscow, but the deadline passed without any response from Russia. The Czech Ambassador to Russia, Vítězslav Pivoňka, was summoned to the Russian Ministry of Foreign Affairs, where, according to Foreign Minister Jakub Kulhánek (CSSD), he was told that Russia is switching to “strict parity” in the number of embassy staff.

After the previous deportations, seven diplomats and 25 administrative and technical staff remained at the Czech Embassy in Moscow, Kulhánek told Czech Television (ČT). He said that 63 employees of the Russian Embassy will have to leave Prague, along with their families.

“I do not want to escalate anything unnecessarily, it is not the role of the foreign minister, but the Czech Republic is a confident country,” said Kulhánek at a press conference.

According to Kulhánek, all members of the EU and NATO stand behind the Czech Republic. The joint statement issued yesterday by NATO notes serious concern about Russia’s destabilizing activities. At a meeting of NATO diplomats, there was a call to support the functions of the weakened Czech embassy in Moscow, or to summon the Russian ambassadors in member countries, said Jakub Landovský, the Czech ambassador to NATO.

The Czech Republic is also hoping for its allies to expel some Russian diplomats. The Slovak Prime Minister, Eduard Heger, has already announced the expulsion of three staff at the Russian Embassy, but he did not give any detailed reasons, or specify their names or functions.

“We rely on the professional activities of our intelligence units. It is also an expression of solidarity with the Czech Republic,” said Slovak Foreign Minister Ivan Korčok.

Russia’s foreign ministry has not yet responded to the move by Bratislava. However, according to the TASS agency, Russian Foreign Ministry spokeswoman Maria Zacharovová warned that Moscow’s reaction will not be long. Moscow is “deeply disappointed by the hostile behavior of Bratislava, which has decided to show pseudo-consolidation with Prague in a fictional matter,” said Zacharovová. She said that Prague “is performing” and not trying to “normalize the work of diplomats”.

Czech Prime Minister Andrej Babiš thanked Slovakia on Twitter: “Thank you very much. I appreciate the huge gesture and attitude of the Slovak Republic”.

Zeman still has not commented on the Vrbětice case. His spokesman Jiří Ovčáček said yesterday that the president would speak on Sunday. At the beginning of a parliamentary session, Deputies observed a minute’s silence in memory of all victims of Russian aggression, not just the two people who died in the explosion in Vrbětice. The government’s actions during this crisis have received broad support from the opposition, but have been criticised by the Communist Party.

According to analysts who spoke to ČTK, an impact on mutual trade relations due to the current crisis would primarily affect engineering and food companies. However, the overall impact on the economy will probably not be dramatic, and should not affect the supply of natural gas or oil from Russia, which concern the entire EU. A disruption of trade in these raw materials would also damage Russia’s global credibility as a supplier, said the analysts.