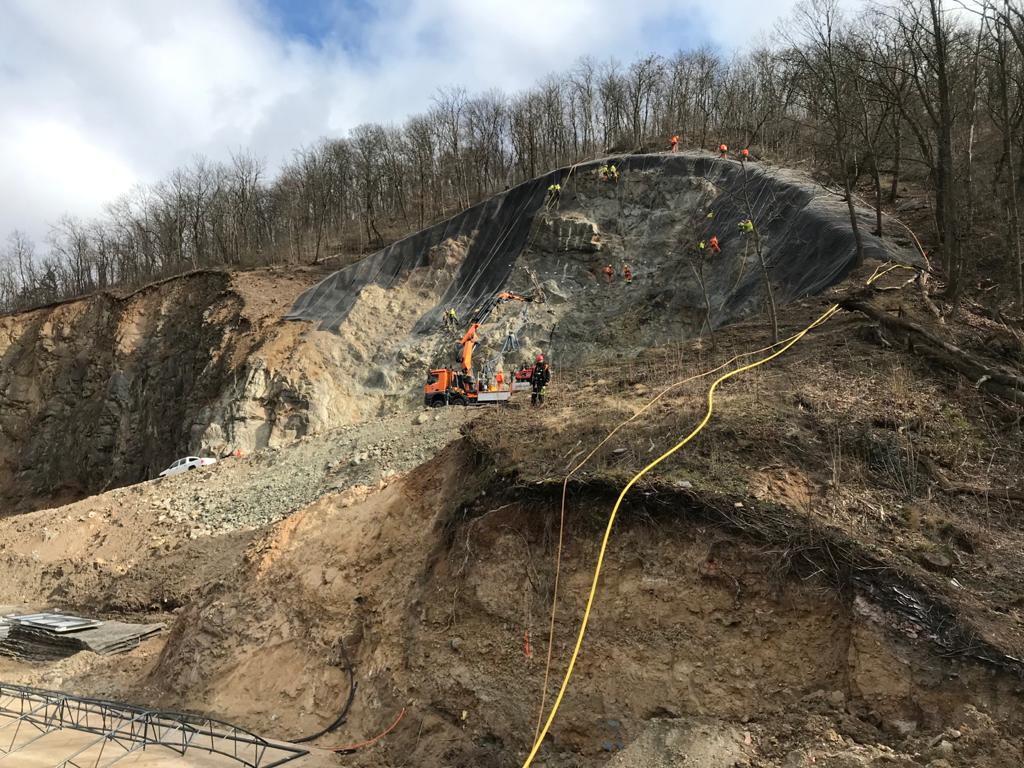 In April, drill and blast excavation will begin under Wilsonův Les (“Wilson’s forest”) for the planned Žabovřesky tunnel, which is part of the Žabovřeská Outer City Ringroad (VMO) project. The blasting will continue until the end of 2021. Drivers will be rerouted for two hour intervals twice or in some cases three times a day. Photo Credit: Radka Matuszkova / MMB.

Brno, Mar 19 (BD) – Construction of the Žabovřeská outer city ring road (VMO) has moved on to another significant stage. Rock blasting will soon begin under Wilsonův Les, possibly as early as April, as part of the construction of the Žabovřesky tunnel, where trams will travel at up to 60km per hour. Traffic will be rerouted to protect citizens and ensure that the blasting goes smoothly.

Detailed preparation is needed before blasting to avoid damage to property or personal injury. ‘‘Although the blasting itself lasts only a few seconds, before it can be carried out, it is necessary to divert traffic and clear the road and part of Wilsonův Les. After that, we still have to check everything again from a safety perspective. The whole process will therefore take about one hour, during which it will always be necessary to divert traffic,’’ said David Fiala, Director of the Brno office of the Czech Directorate of Roads and Motorways (ŘSD).

In spring, drill and blast excavation will begin under Wilsonův Les for the planned Žabovřesky tunnel. Closures will be in effect on Žabovřeská – traffic will be rerouted to protect citizens and ensure that the blasting goes smoothly. pic.twitter.com/XNkMy7IBnD

Although 60 minutes is required for the whole operation, drivers will be required to follow alternative routes for two-hour windows during the blasting, in order to accommodate delays caused by weather, operational difficulties, transport of materials, and any other unexpected issues. The two-hour diversions will be in place twice or in some cases three times a day.

The blasting is expected to start in April, subject to conditions. In summer, weekend closures and further restrictions are anticipated.

Traffic will be rerouted in both directions from the Pisárecká tunnel via the overpass to MÚK Hlinky, then along Pisárecká to Veslařská and over Kamenomlýnský bridge back onto the Žabovřeská ring road. New traffic light intersections will be installed at the junction of Veslařská and Kamenomlýnský bridge, and at the branch of Veslařská from Kníničská. Separate arrangements will be in place for vehicles over 6.5 tonnes.

People in the vicinity of blasting are advised to follow the instructions of construction workers and not park in the area. Listen out for the warning tones that signal the impending blasts and leave the dangerous area immediately.

Rock blasting will soon begin under Wilsonův Les, possibly as early as April. The public is requested to follow all guidance closely, as even small disruptions could seriously delay the necessary work. @brnomycity #kopemezabrno pic.twitter.com/XbXQg0XrW5

Cooperation from residents and visitors to the area is necessary for the blasting work to proceed according to schedule. Any misconduct can cause blasting to be cancelled, which will prolong the construction period. Citizens are asked to cooperate and follow the rules of conduct in this area.

As Brno Mayor Markéta Vaňková explained, ‘‘although this work will unfortunately cause temporary inconvenience, the result will be the completion of an important route for car and public transport. And thanks to improved flow of traffic, there will also be an overall improvement in living conditions, including the enhancement of public space around this section of the outer city ring road.’’

https://brnodaily.com/2021/03/19/brno/blast-excavation-for-zabovresky-tunnel-under-wilsonuv-les-to-begin-in-spring/https://brnodaily.com/wp-content/uploads/2021/03/rock-blasting-wilsonuv-les-construction-zabovreska-VMO-credit-Radka-Matuszkova-4.jpghttps://brnodaily.com/wp-content/uploads/2021/03/rock-blasting-wilsonuv-les-construction-zabovreska-VMO-credit-Radka-Matuszkova-4-150x113.jpg2021-03-19T11:44:47+01:00Kim BingelBrnoNewsBrno,Construction,NewsIn April, drill and blast excavation will begin under Wilsonův Les (“Wilson’s forest”) for the planned Žabovřesky tunnel, which is part of the Žabovřeská Outer City Ringroad (VMO) project. The blasting will continue until the end of 2021. Drivers will be rerouted for two hour intervals twice or in...Kim BingelKim Bingelkjbingel@gmail.comAuthorSouth African in Brno. Independent international traveller. Enjoys nature and a sustainable lifestyle.Brno Daily