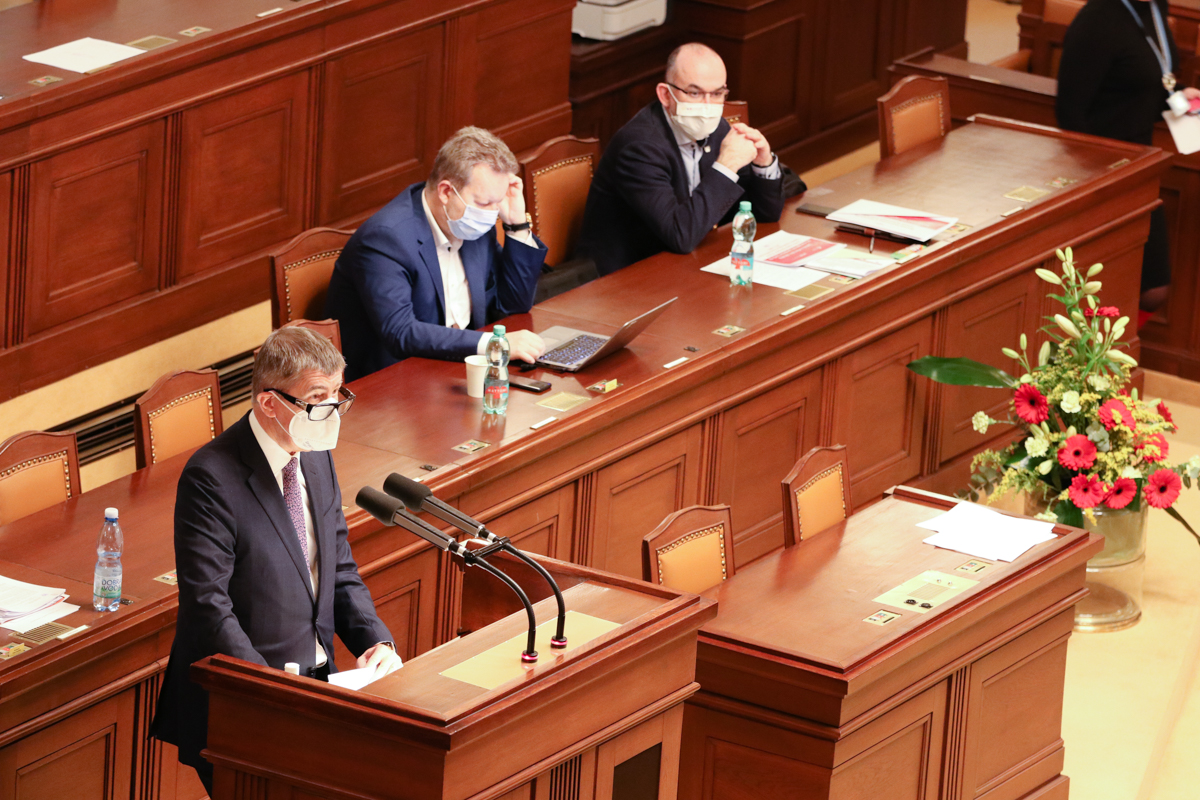 Czech Rep., Jan 22 (BD) – Yesterday, the Chamber of Deputies agreed to extend the state of emergency until February 14th, a week less than that original request by the cabinet of Prime Minister Andrej Babiš (ANO) for another 30 days. The current state of emergency will expire on January 22nd.

The state of emergency has been in continuous effect in the Czech Republic since October 5th, 2020. The proposal to extend until February 14th came from the Communist Party, and was approved by 54 of the 101 deputies present, from ANO, the Social Democrats and the Communists. In return for supporting an extension, the Communists demanded the reopening of ski resorts and primary schools; Health Minister Jan Blatný (for ANO) agreed that these could be reopened from next month, but only if the epidemiological situation allows.

Violence in the Chamber

The debate was disrupted midway through by a physical altercation between deputies. Lubomír Volný was addressing the Chamber for the second time during the debate, without a mask, when he was warned by meeting chairman Tomáš Hanzel (CSSD), Vice-Chair of the Chamber of Deputies, to get to the point or his microphone would be turned off.

Following threatening language from Volný, Hanzel turned off his microphone, at which point Volný approached the chair and attempted to get control of the chairman’s microphone. After a short struggle, other ČSSD deputies came to help Hanzel, leading to a brief physical altercation before Volný left the chair. Despite the interruption, the Chamber then concluded the discussion regarding the state of emergency, and voted for its extension.

Volný is the leader of “Unified – Alternative For Patriots” (JAP), a small far-right parliamentary grouping formed by three deputies elected for Tomio Okamura’s SPD, who have since left. The police are dealing with a possible violation of hygiene measures by Volný and his JAP colleague Marian Bojka, who both gave speeches without a mask. After an evaluation, the matter will be handed over to administrative proceedings.

Radek Vondráček (ANO), Speaker of the Chamber of Deputies, expelled Volný from the chamber, saying that he may have committed a criminal offense by attacking deputy Jan Chvojka (CSSD), who intervened to assist Hanzel.

“The fact that Volný entered the chairman’s area and began pushing buttons and demanding action with physical force is unacceptable behavior according to the Rules of Procedure, and it deserves disciplinary proceedings,” said Vondráček.

Despite the incident, Volný has not resigned his mandate, but said he felt more encouraged to represent those who agree with him. “In a few minutes, I received a lot of encouraging messages, text messages, on the Internet and on Twitter from people who support me and ask me to continue the fight, so I will definitely continue,” he said.

In light of the incident, many have strongly criticised Volný, including Babiš, who condemned his behaviour.

https://brnodaily.com/2021/01/22/news/politics/state-of-emergency-extended-to-february-14th-debate-marred-by-fight-in-chamber/https://brnodaily.com/wp-content/uploads/2021/01/chamber-of-deputies-babis-blatny-credit-PSP-1024x683.jpghttps://brnodaily.com/wp-content/uploads/2021/01/chamber-of-deputies-babis-blatny-credit-PSP-150x100.jpg2021-01-22T09:08:26+01:00Jack StephensCzech Republic / WorldPoliticsAndrej Babis,Coronavirus,Czech Republic,PoliticsYesterday, the Chamber of Deputies agreed to extend the state of emergency until February 14th, a week less than the cabinet’s request for another 30 days. The current state of emergency will expire on January 22nd. The meeting of the Chamber of Deputies was disrupted by a physical altercation...Jack Stephens jack.stephens50@gmail.comAuthorA writer and English teacher originally from London who has lived in Brno since 2011, interested in politics, low culture, and all things strange and/or Czech.Brno Daily

A writer and English teacher originally from London who has lived in Brno since 2011, interested in politics, low culture, and all things strange and/or Czech.
View all posts by Jack Stephens →
« Parliament Approves Mandatory Minimum Quotas for Czech Food In Shops
Education in Hard Times Part II: How An Elementary School Has Been Dealing With The Pandemic »