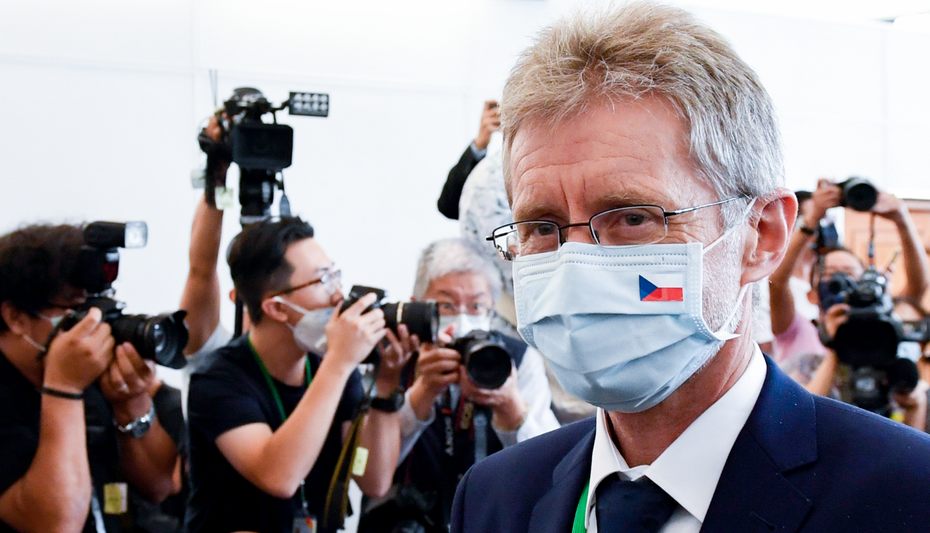 Czech Rep., Sep 1 (BD) – Chinese State Councillor Wang Yi, the Chinese government’s most senior diplomat, has responded with anger to an official visit to Taiwan by Czech Senate President Milos Vystrcil (ODS), warning that Vystrcil would pay a “heavy price” for the trip. In response, the Czech government summoned the Chinese ambassador to the Czech Republic.

Vystrcil arrived in Taiwan on Sunday on a five-day visit designed to enhance economic and trade links between the two countries, accompanied by a 90-person delegation that included Prague Mayor Zdenek Hrib (Piráti). Vystrcil’s predecessor Jaroslav Kubera (ODS) was planning a similar trip until his death in January. The Chinese government has reacted with hostility to any attempts to improve relations with Taiwan; according to Kubera’s family, he was receiving threatening letters from the Chinese embassy up until his death. On his arrival in Taipei, Vystrcil said that his visit was not intended to be confrontational, but that the Czech Republic would not bow to orders from Beijing.

However, speaking from Germany, Wang described the Senator’s visit as “open provocation”, adding that “the Chinese government and Chinese people won’t take a laissez-faire attitude or sit idly by, and will make him pay a heavy price for his short-sighted behaviour and political opportunism,” though he did not give any details of retaliatory measures.

In response, the Chinese Ambassador to the Czech Republic, Jianmin Zhang, was summoned to a meeting with Czech Deputy Foreign Minister Martin Tlapa to explain the comments. In a statement from the Czech Foreign Ministry, Tlapa stressed his disagreement with the remarks, and said that Wang’s comments were “inappropriate and inconsistent with the standards of diplomatic communication between the two sovereign countries.” Foreign Minister Tomas Petricek told reporters that although the government had not supported the visit, the wording Wang had used had “crossed the line”.

China does not recognise Taiwan as a sovereign nation and maintains a “One China” diplomatic stance, whereby ending diplomatic relations with Taiwan is required for any country wishing to trade with China. Czech President Milos Zeman has promoted closer links with China since he was elected in 2013, but much of the investment promised by the Chinese government has not arrived, and increased Chinese involvement in the Czech economy is controversial. Among other issues, debate continues about whether to allow Chinese telecoms giant Huawei access to Czech networks.

Speaking at Taipei University, Vystrcil praised Taiwan’s democratic society and emphasised the shared values between his hosts and the Czech Republic: “I believe that democracy, with freedom, truth and justice stemming from it, constitute our most treasured common values.”

https://brnodaily.com/2020/09/01/news/politics/top-chinese-diplomat-threatens-czech-senate-president-over-taiwan-visit/https://brnodaily.com/wp-content/uploads/2020/09/milos-vystrcil-taiwan-press-credit-senat.cz_.jpghttps://brnodaily.com/wp-content/uploads/2020/09/milos-vystrcil-taiwan-press-credit-senat.cz_-150x86.jpg2020-09-01T12:21:44+02:00Jack StephensCzech Republic / WorldPoliticsCzech Republic,News,PoliticsSpeaking in Germany, Wang Yi, the Chinese government’s most senior diplomat, said that Czech Senate President Milos Vystrcil would pay a “heavy price” for his visit, comments that led the Czech Foreign Ministry to summon the Chinese ambassador for an explanation. Photo: Milos Vystrcil. Credit: Senat CR archive.Czech...Jack Stephens jack.stephens50@gmail.comAuthorA writer and English teacher originally from London who has lived in Brno since 2011, interested in politics, low culture, and all things strange and/or Czech.Brno Daily

A writer and English teacher originally from London who has lived in Brno since 2011, interested in politics, low culture, and all things strange and/or Czech.
View all posts by Jack Stephens →
« Dr. Max on Bašty to Replace Pharmacy on Koliště as Regional Emergency Medicine Provider
International Spotlight will Shine on Janáček Brno 2020 »