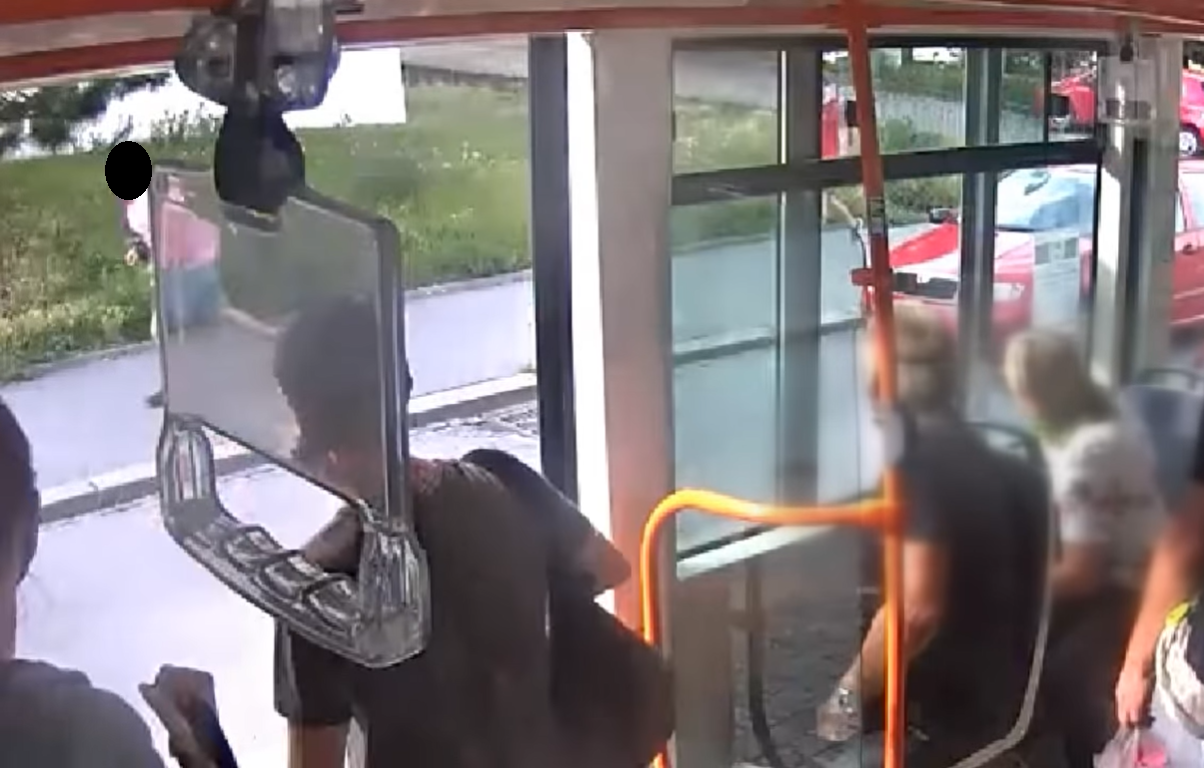 A Brno man fled a tram in an attempt to escape a fine from the inspector – and then got hit by a car at the tram stop. The fugitive seemed to be unhurt, as he collected his things and continued his escape. He is yet to be found. Photo source: Policie CR.

Brno, Jul 20 (BD) – [updated Jul 21] When an inspector boarded a tram in Brno one afternoon towards the end of June, one passenger must have had a guilty conscience, as he decided in a flash to flee the scene, and ended up in an even bigger mess.

When the inspector reached him, the passenger made a run for it as soon as the tram stopped. The inspector tried to block him, but he got away. He didn’t get very far, however, as right at the stop he was hit by a passing car, and thrown onto the concrete sidewalk. Clearly determined to evade the law, the man quickly gathered his things and continued his getaway.

The incident took place at Semilasso one afternoon towards the end of June, and police have yet to find the unknown stuntman. The man is being hunted by both the police and the traffic police, as the car incurred damage of around CZK 15,000.

The police are asking anyone who knows this man or has any information to call the emergency line 158, and anyone who witnessed the incident to report to the traffic police.

On July 21st, police spokesman Petr Vala announced that “the acrobat has been caught.” Shortly after the appeal for information on the fugitive, key witnesses contacted the police, providing information that put investigators onto his trail.

When law enforcement officers arrived at his house, the man admitted knowing that the police were looking for him and said he was waiting for them. He said he had not been able to hand himself in because “he didn’t know where.” He is now facing charges of causing an accident.

https://brnodaily.com/2020/07/20/brno/video-brno-man-hit-by-car-while-escaping-fine-for-fare-evasion/https://brnodaily.com/wp-content/uploads/2020/07/screenshot-fleeing-man-source-policie-cz-1-1024x653.pnghttps://brnodaily.com/wp-content/uploads/2020/07/screenshot-fleeing-man-source-policie-cz-1-150x96.png2020-07-21T15:13:54+02:00Tessa AdamsonBrnoCrimeBrno,Crime,News,TramA Brno man fled a tram in an attempt to escape a fine from the inspector - and then got hit by a car at the tram stop. The fugitive seemed to be unhurt, as he collected his things and continued his escape. He is yet to be found....Tessa Adamson T.M.Adamson@hotmail.comAuthorExpat student from the Netherlands, passionate about writing, travelling, languages and politics.Brno Daily