Br(u)no: The Start of a New Basketball Era? 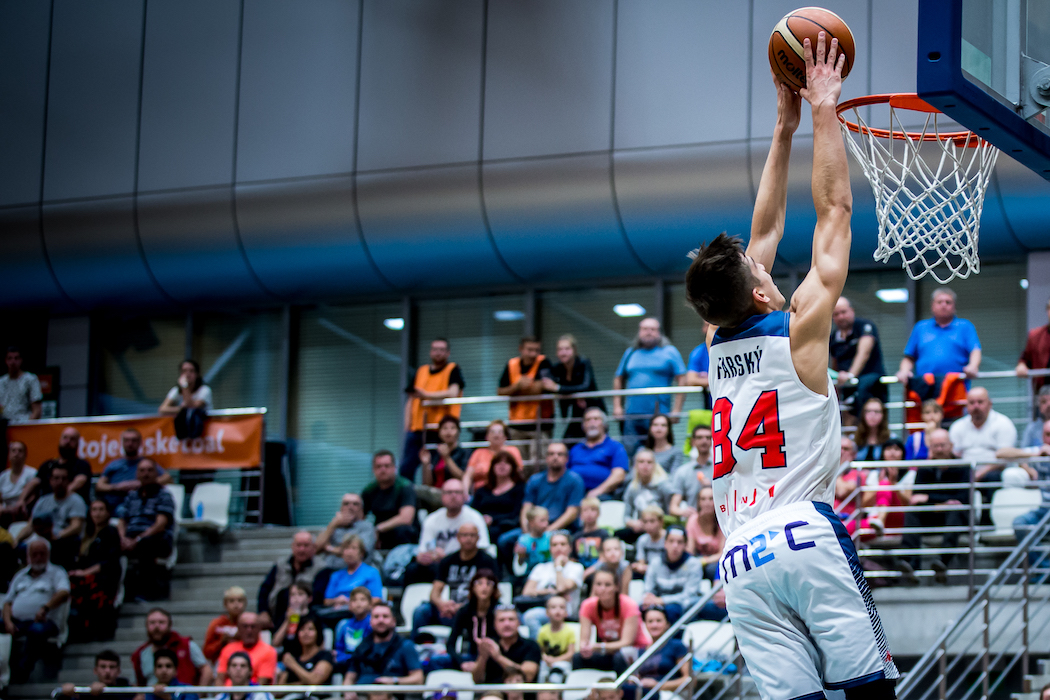 Radek Farský is an up-and-coming talent who passed on several domestic and international offers to stay in Brno. Photo credit: Jan Russnak.

While FC Zbrojovka was playing SK Líšeň in an exciting rivalry game three weeks ago, many fans were also closely following another game that was being played halfway around the world. The Czech national basketball team was playing Serbia in the fifth-and-sixth-place game in the 2019 FIBA World Cup in China — and the first-half highlights were being celebrated right along with the football game celebrations.

Even now, above DRFG Arena, the home of HC Kometa and rabid hockey fans, there is a huge Home Credit billboard that celebrates the Czech national basketball team, which finished a respectable sixth in that international tournament.

In other words, this may be the year that basketball really takes off in the Czech Republic.

Brno has a long history of basketball success. The two women’s teams have reached the league finals in the past two seasons, BK Žabiny Brno last year and KP Brno the year before.

Now, mmcité1 Basket Brno, the top men’s team in the city, looks to have a strong team that may be able to combine the local men’s team’s long-ago success and the current national team performance to put people in the stands and stories of victories into the newspapers.

“Basketball is not football or hockey. We have to fight for every fan,” said Lubomír Růžička, the team’s new head coach. “I want to attract the largest possible number of fans, and especially bring kids to the game.”

This year’s team definitely looks like it would be worth a look. Your first chance is tonight at 7 p.m. when mmcité1 Basket Brno hosts Sluneta Ústí nad Labem. Home games are near Campus Square at Kamenice 5 in Bohunice.

Růžička is well known in Czech basketball and respected as a head coach. Most recently he led Svitavy in the postseason.

“First of all, we want to stay healthy,” Růžička said at a press conference on Wednesday. “And we want to get into Group A1 and then bring some playoff games to Brno.”

The three Americans from last year’s team — Davell Roby, Reggie Keely and Deremy Geiger — are gone. So are Radek Pumprla and Viktor Vašát.

The players who will strive to reach Růžička’s goals are a mix of new and old. Růžička brought in Bryan Smithson, Richard Körner, Filip Novotný and Petr Heřman. They join Radek Farský, a 20-year-old guard who is a constant threat from 3-point range; Lukáš Stegbauer, a solid scorer; and Jan Kozina, who is a team leader at point guard.

Bryan Smithson is an American point guard with a lot of experience. He is 34 years old and his skills have been honed over many seasons, most recently in Germany.

Richard Körner comes from the top league in Slovakia, where he has represented the country. “He is a star from Slovakia,” Růžička said. “He is the type of player that people will want to see. He plays a great style of basketball.”

Novotný is on loan from the top program in the country, ERA Basketball Nymburk. He is a 20-year-old forward.

Heřman is just over two meters tall and a force under the basket. “I have known him from when he was 19,” Růžička said about Heřman. “He loves basketball. He is very hungry. Unfortunately, he had a lot of injuries. He still has a lot of potential. “

Růžička is especially driven to develop young talent and upstanding members of the community. He boasts of the fact that eight players are currently attending school and two have degrees.

One reason he took the coaching job in Brno — passing on several enticing offers — was because of the overall, long-term prospects of the club.

“This organization and the structure of the program is at a high level,” he said.

Basketball has long been played at a high level in Brno. Basket Brno, however, was only founded in 2012. It has excellent facilities and staff, but not many victories to show for it. In the past three seasons, Brno has accumulated a 40-74 record.

Dejan Jakara came on as head coach two years ago and promptly won his first game, on national television, in the 2017-18 season opener. Then, it went downhill with just five victories in the next 21 regular-season games. The team finished the season with eight more wins against the weaker teams of Group A2 and ended with an 14-24 overall record.

Last season, Jakara’s team again gained some early momentum and hit a wall. Management sent some suggestions. They weren’t well received. Things fell apart. Assistant coach Martin Vaněk took the helm for two games, then Christianos Chougkaz, the former coach of the Prague team, was named as the replacement head coach. The team powered through the distractions and did something that it had never done: advanced into Group A1 for the second phase of the season. The tougher competition may well pay off as game experience this season, but the team won just four more games and got swept out of the postseason, by Prague, in two games. The tougher competition resulted in an 11-27 record.

Now there is another season and a new start.

On Tuesday, the team played in the first round of the Alpe Adria Cup and, though they led in almost every statistical category, lost to Swans Gmunden of Austria by five points, 79-84. (The difference was in free throws: Brno was 9 of 14; Gmunden went the line more than twice as much and was 23 of 32.)

There are 12 teams in the Kooperativa NBL. The first phase of the season has 22 rounds, where each team plays every other team once at home and once away through the end of January.

The top eight teams will move into Group A1, play each other home and away, and establish positions for the postseason. The bottom four teams will play in Group A2 and try to stave of relegation from the league.

https://brnodaily.com/2019/10/05/sport/bruno-the-start-of-a-new-basketball-era/https://brnodaily.com/wp-content/uploads/2019/10/BrunoinBrno051019-1024x683.jpghttps://brnodaily.com/wp-content/uploads/2019/10/BrunoinBrno051019-150x100.jpg2019-10-05T10:21:49+02:00Bruno ZalubilColumnSportBasketball,Brno,Czech Republic,SportRadek Farský is an up-and-coming talent who passed on several domestic and international offers to stay in Brno. Photo credit: Jan Russnak. While FC Zbrojovka was playing SK Líšeň in an exciting rivalry game three weeks ago, many fans were also closely following another game that was being played halfway around...Bruno ZalubilBruno Zalubilbzalubil@hotmail.comAuthorA connoisseur of the unpredictable and unscripted drama of sports.Brno Daily

A connoisseur of the unpredictable and unscripted drama of sports.
View all posts by Bruno Zalubil →
« COFACE Country Risk Conference In Brno Warns of Risk of Economic Downturn
What’s Up Brno? – Events in Brno, Week n°41 »