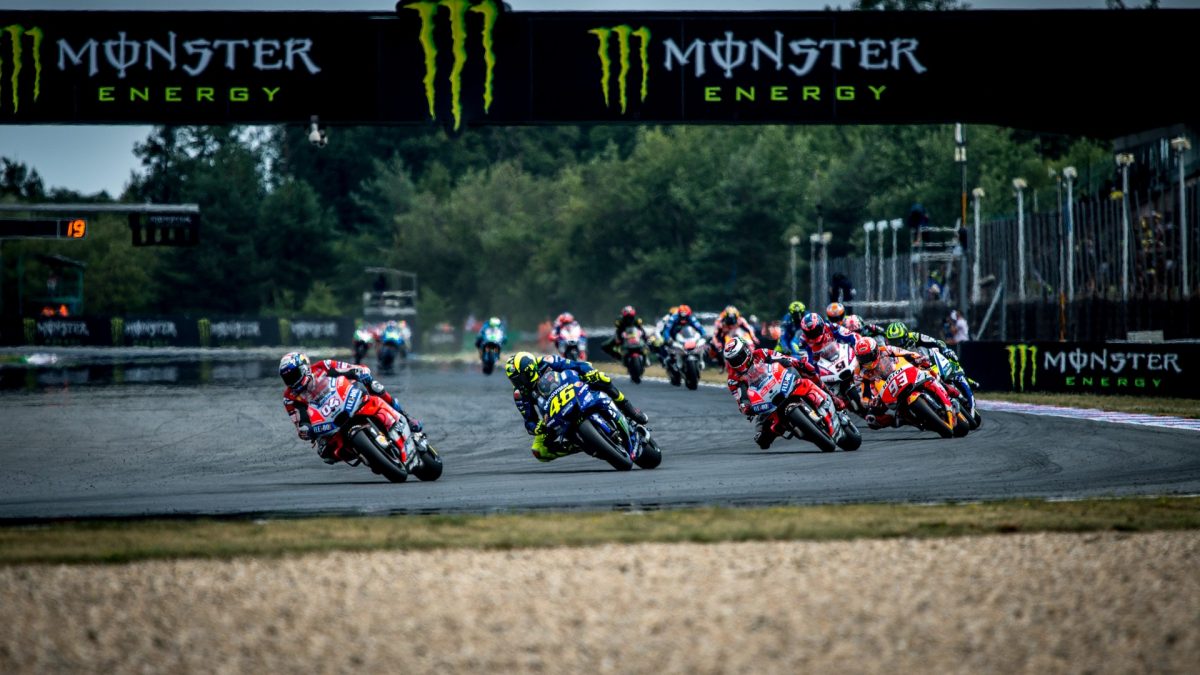 The CzechGP will put Brno in the sports news around the world. Photo credit: czechgp.com.

What Drama will the 2019 CzechGP Provide?

Brno will be at the center of the international motor sports world when the CzechGP roars to life this weekend. Qualifying races will be Friday and Saturday. The title races will be on Sunday.

For the schedule, visitor information and maps, go to https://www.automotodrombrno.cz/en/.

The Masarykův Okruh (Masaryk circuit, Automotodrom Brno) has been the site of many memorable races. What will happen this year? Thousands of people from throughout central Europe will descend upon this area in order to find out.

Brno is where longtime superstar Valentino Rossi, a perennial local favorite, won his first GP in 1996. He has nine overall titles and his local form is still excellent: in 2016 he was second behind Cal Crutchlow of Great Britain; in 2017 he passed Crutchlow on the final lap to finish fourth; and in 2018 he was fourth again, just seconds behind the winner.

Speaking of drama, Crutchlow had a good excuse for succumbing to Rossi in the 2017 CzechGP. The British rider was bruised and battered after a fall in qualifying on Saturday sent him to the hospital; because he did not have any broken bones, he came back to get the respectable fifth-place finish, even if he got caught late by Rossi.

Last year, may have been the best race of all. The podium finish was the third closest in the MotoGP era, with Andrea Dovizioso (Ducati) winning the race in 41m 07.728s and Jorge Lorenzo (Ducati) 0.178 seconds back in second and Marc Márquez (Honda) another 0.368 seconds back in third. Blink, and you missed it. Rossi (Yamaha) trailed by another 2.902s in fourth and Cal Crutchlow (LCR Honda) was another 2.958s back in fifth.

The racetrack experience includes giant screens, refreshments and merchandise stands. Expect hot weather. Special Bus Link No. 400 will operate between Menlovo náměstí and the track. Parking lots for cars and motorcycles will also be available.

There is a finite number of tickets. Some should still be available through today at Gallery Vaňkovka. Tickets should also be available for purchase at the TO JE Brno information center on Panenská Street on the ground floor of the Domini parking house, or perhaps online at czechgp.com and gp.ticbrno.cz.

There are 28 more games left in the Fortuna: Narodni Liga season, but the initial results have longshot newcomer SK Líšeň with four points through two rounds and pre-season league favorite FC Zbrojovka Brno with just two.

The results are early, but they have nevertheless led to jubilation in Líšeň and the institution of a penalty system in Kralovo Pole.

SK Líšeň traveled to MFK Chrudim on Saturday and got three second-half goals by David Krška in the 53rd minute, Marek Vintr in the 57th minute and Martin Rolinek in the 90th minute. (Just a few days before the game, Zbrojovka sent Vintr on loan to Líšeň.)

It was a big road win in the team’s first road game in the country’s second league. The previous week, Líšeň tied FK Varnsdorf, 2-2, in front of a record-setting home crowd.

Zbrojovka had to settle for a second tie, this one was 1-1 on Friday night in front of 3,520 fans. Lukáš Magera converted a pentalty kick in the sixth minute, then, 11 minutes later, FK Pardubice evened the score. Not much more happened after that.

Zbrojovka team management was particularly unhappy with the two ties to begin the season. On Sunday, the team website had the following announcement (translated from Czech): “FC Zbrojovka Brno’s sports management team assessed the unsatisfactory situation of the A-team at the beginning of the new season and decided to take a radical step towards the players. The club management will therefore impose financial penalties for an unprofessional approach and shameful performance in the matches against Vlašim and Pardubice.”

Zbrojovka, which was listed as the 1.8-to-1 favorite to win the league, goes to Sokolov on Saturday. The game starts at 10:15 a.m. The next two games will be interesting. Ústí nad Labem, a team with top-league history, comes to Brno on Friday, Aug. 9 at 7 p.m..

Then, on Saturday, Aug. 17, it was announced that ČT Sport will broadcast the Zbrojovka at Dukla Praha at 10:15 a.m.

A brunch game? Such is life in the second league.

At least, in the Czech Republic, it’s never too early to drink beer.

Draci to Play Eagles Praha in the Wildcard Series

Draci Brno sent a message on Saturday: We may have had a regular season below our normal standards, but we are a force with which to be reckoned in meaningful games. See you in the postseason

The Top6 phase of the extraliga season is now over. Arrows Ostrava (16-4) advance directly to the Czech Series, which has a best-of-five format that will be contested over two weekend: Aug. 16-18 and 23-25.

The 21-time champion Draci have won five of seven games against the Eagles this season. The Arrows, who surprised the overwhelming-favorite Draci to win the 2018 Czech Series, have beaten the Draci four of six times so far this season.

Technika Brno needed to beat Sokol Hluboká in order to finish in the top four of the lower bracket and maintain its place in the Czech extraliga. They won both games of the double header, 7-2 and 14-10, on Saturday.

Brno batted first and scored 101 all out (19.2 overs). Then, when in the field, they were unable to contain two Prague Players, who scored 107 between them (9.2 overs) on 57 balls. Several Brno players — Somesekhar Banerjee, Ushan Gunathilake, Naveed Khan and Dylan Stejn — represented the Czech National Team on a trip to Hungary.

Brno is now 0-2 early in the T40 season. The first scheduled game was abandoned due to rain.

The next outing for Brno will be a rematch with the Prague Cricket Club first team, but this time in Brno. The match is schedule for Saturday at 11:30 a.m.

Mathieu van der Poel, the 24-year-old Dutch cycling phenomenon, added another title to his amazing career on Sunday in Brno when he won the UEC European Mountain Biking Championships.

Thousands people visited the four-day event behind the Anthropos Museum in Pisárky.

Van der Poel was the favorite to win, but he went over his handlebars in the middle of the Little Devil section of the first lap. He quickly got back up on his bike, regained the lead after a lap and then pulled away from the field. He completed eight laps of the course in 1:28:34

Florian Vogel of Switzerland was second, 43 seconds back, and the Netherlands’ Milan Vader was third, 1:02 behind his countryman winner.

Remember his name for the mountain biking championships in the 2020 Tokyo Olympics next summer.

“This course was really something,” Van derl Poe told the press after the race. “I really liked it. I felt strong from the beginning but I crashed in the first lap. It took me a while to find my good rhythm back and I think I had a very strong race.”

Jolanda Neff of Switzerland dominated the women’s race. She completed seven laps in 1: 30:08. Yana Belomoina (Ukraine) was 2:52 back in second place after putting away third place Elisabeth Brandau, who as 3:05 off the lead.

The schedule for various Brno professional and recreational sports for the next two week. All dates and times subject to change. Home team listed first (when applicable).

A connoisseur of the unpredictable and unscripted drama of sports.
View all posts by Bruno Zalubil →
« Prague-Brno RegioJet Buses To Run Without Stewards From August Due To Staff Shortages
“Triplet” Tram Running in Brno Is The Longest In The Czech Republic »