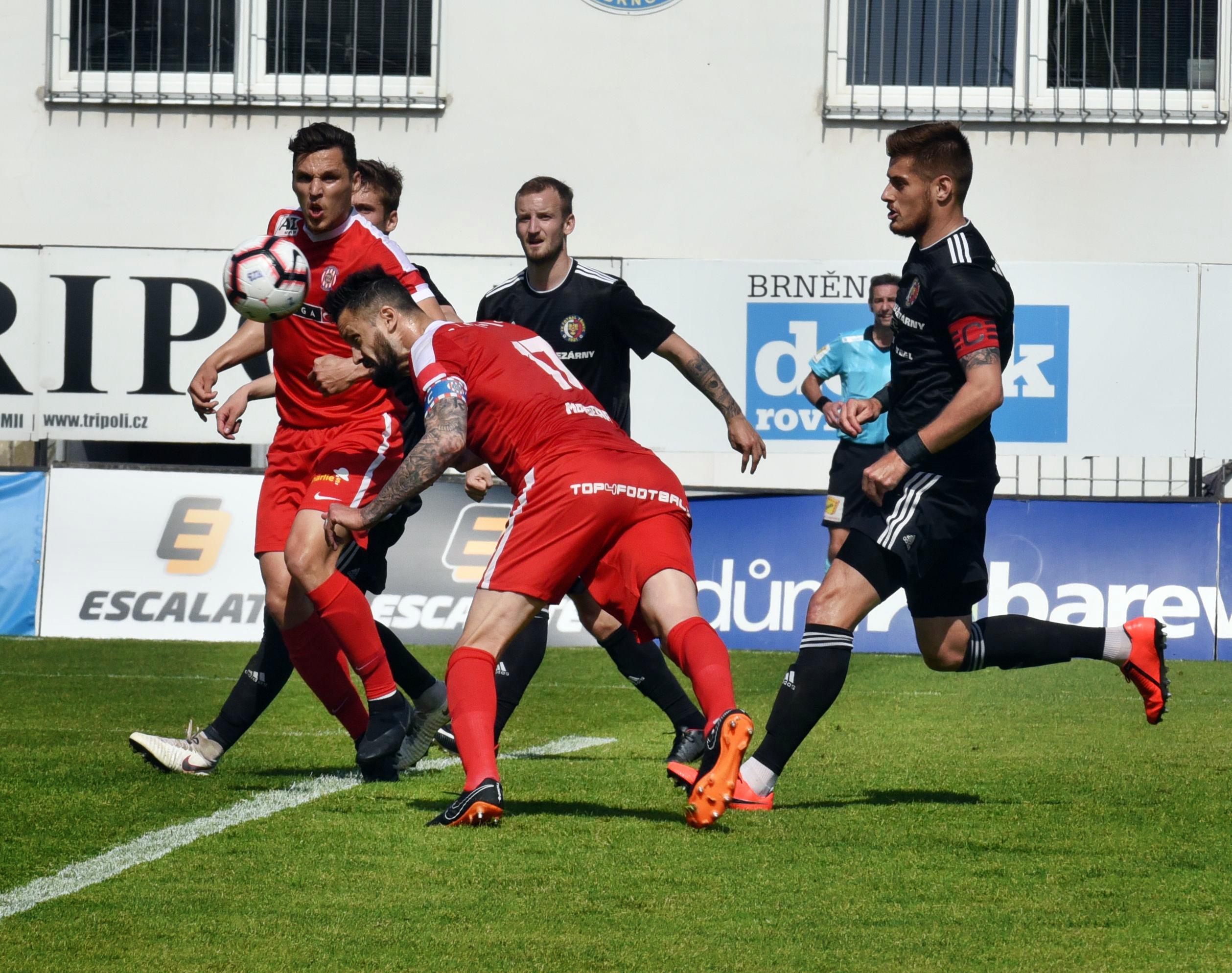 Lukáš Magera led Zbrojovka to the cusp of promotion last year. He scored a dozen goals, including several with his head. Photo credit: FC Zbrojovka.

Brno, July 17 (BD) — Draci holding on to postseason hopes and Večerka signs a pro contract; Brno Cricket Club opens T40 season on Saturday; the UEC Mountain Bike European Championship is July 25-28 and free to the public; and the Brno sports results and schedule.

The bad news is that Brno, the second biggest city in the Czech Republic and the capital of Moravia, does not have a team that will compete in the top league of the country.

The good news is that Brno has two teams that will compete in the second league — the Fortuna: Narodni Liga. That means a quality game within the city mass transportation system every weekend (except international breaks) and two big rivalry games when the traditional top team, FC Zbrojovka Brno, faces the upstart newcomer, SK Líšeň, in the middle of September (Round No. 6 in Kralove Pole) and in the middle of April 2020 (Round No. 22 in Líšeň).

And even better news: both Zbrojovka (F:NL) and Líšeň (MSFL) were the top scoring teams in their leagues last season. Both teams have basically the same players back, so expect many more goals to be scored.

Zbrojovka begins the season at FC Sellier & Bellot Vlašim on Friday at 6 p.m. The first Zbrojovka home game will be against FK Pardubice on July 26 at 7 p.m.

Lukáš Magera, who had 12 goals last year, is back. Unfortunately, Peter Štepanovský, who had 11 goals last year, will start the season on the bench with an injury. Antonín Růsek had seven goals last year. Ladislav Krejčí (who went to Sparta Praha) and Michal Škoda (Příbram) have left the team. Adam Fousek is a new face who has come over from Pardubice.

SK Líšeň, on the other hand, will begin its first season in the league this Saturday at home against FK Varnsdorf. Kick off is 5 p.m.

FC Zbrojovka, which had been a mainstay in the top league, finished its 30-game first season in the second league of the Czech Republic in early June with a record of 17-6-7 and 57 points. The team ended the regular season with six straight wins by outscoring its opponents 21-3 and pushing their goal total to a league-high 63. The team earned the right to play 1. FC Příbram for a chance at promotion, but, after a 3-3 tie at home, they managed just one shot on goal in a scoreless tie on the road, thus sealing their fate with another season in the second league.

Be prepared for cold weather because the team has requested to use Friday night as its default for the 2019-20 season. Kick off will generally be at 7 p.m.

Líšeň finished atop the standings for the Fortuna MSFL league with a record of 18-7-5. Jakub Přichystal, who was on loan from FC Zbrojovka, led the team with 13 goals and nine assists. Tomáš Machálek scored nine goals and had six assists. David Krška had 12 goals and 13 assists.

The main core of the team will be back this year, but the promotion has necessitated many infrastructure changes.

“Adjustments are still in progress, some of them must be ready for the first match,” said SK Líšeň

chairman Karel Hladiš. “It is mainly about building a guest sector, a press room and a place for VIP guests, the acquisition of a turnstile, a field runout adjustment, and an entry tunnel for players. Next will be the completion of another visitor toilet and regeneration zone for players.”

The two Brno teams in the Top6 are going opposite directions as the postseason is closing in: The Draci won both of their important games last week and Cardion Hroši Brno lost three times.

Draci Brno beat Eagles Praha in a Sunday doubleheader that was quickly scheduled because of rain outs on Friday and Saturday. The Draci (8-6) are in third place and three games behind Eagles Praha (11-3) and Arrows Ostrava (11-3).

The 21-time-champion Draci host the Eagles tonight at 8 p.m. in a make-up game.

If they were to make up their three-game deficit to finish atop the Top6 standings, the Draci would advance directly to the best-of-five Czech Series, which will be played over two weekends, Aug. 16-18 and 23-25. The Draci have played in 25th consecutive Czech Series.

If they are able to finish in the top three, they will play in the best-of-three Wildcard series on Aug 2-4.

The Hroši (4-10) have been eliminated from postseason competition. They have influence on the teams that advance, though. They host Draci Brno on Sunday, July 21 at 5 p.m.

Viktor Večerka, a left-handed pitcher who reaches more than 90 mph with his fastball, signed with the Kansas City Royals during a press conference at MBS on Monday afternoon.

A rainy Saturday, in effect, postponed the start of the T40 season last weekend. So Brno Cricket Club will host Prague Cricket Club, the second team, this Saturday at 11:30 a.m. and get the season rolling.

Brno will host the UEC Mountain Bike European Championship on July 25-28. The main grandstand is behind the Anthropos Museum in Pisarky.

Entry is free on all four days.

Several different categories will crown champions with races that go up and down the hills over the Pisárecký Tunnel, and between Pisárecka Street to the south and the area above the Riviera complex to the east.