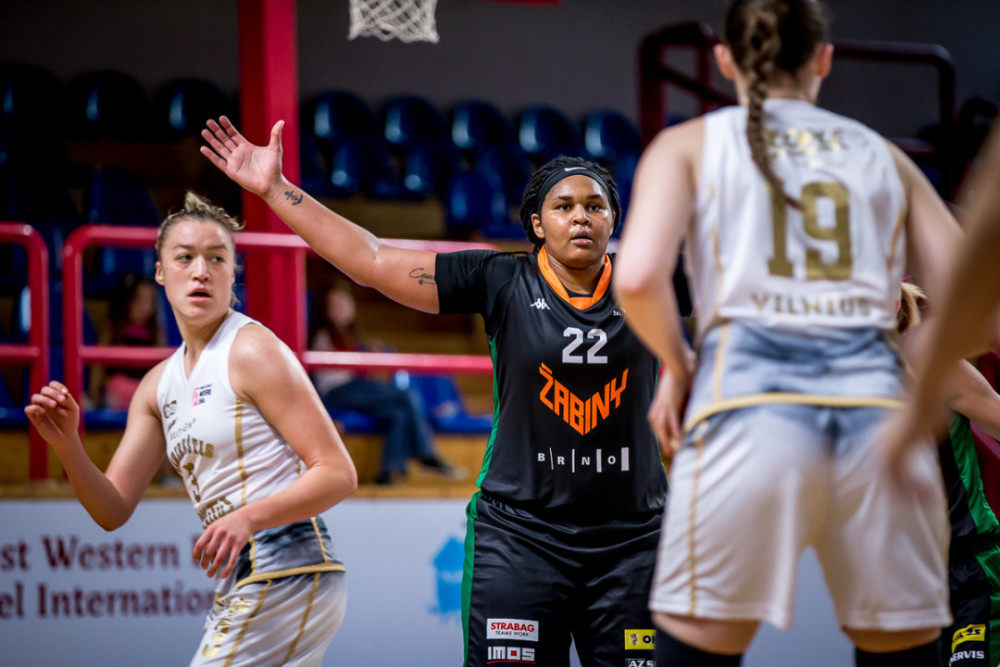 KP Brno will host Game 1 of the ŽBL semifinals tonight (Wednesday) when it welcome crosstown rival Žabiny Brno to Hala vodova. The game starts at 4 p.m.

The two teams have played twice this year, each time with the visiting winning. They have a long history of playing important games against each other.

“We have different styles and modes of play,” said Žabiny Brno head coach Viktor Pruša on bkzabiny.cz. “The team that succeeds in imposing its own style on the other will be more successful in the series. It is the last part of the schedule for us after a long season full of highlights, and we are fully concentrated on the big dream in the form of the final.”

Žabiny Brno will have leading-scorer Petra Záplatová back on the court. She averages 13 points a game. Unfortunately, Kateřina Zohnová, who averages 11 points a game, broke her arm. Statistically, Žabiny Brno appears to have a significant advantage in rebounding.

KP Brno is led offensively by the 12.2 points-per-game average of Michaela Stará and 12 ppg from Edita Šujanová.

“Every game begins at 0-0 and our chances are 50-50,” said KP Brno head coach Martin Pospíšil on kpbrnobasket.cz. “Both teams have their own quality.”

Game 2 of the best-of-five-games series is Saturday in Zabovresky at 5 p.m. Game 3 is Tuesday back in Kralove Pole. If necessary, Game 4 would be Thursday, April 4, and Game 5 would be Sunday, April 6.

“I love the atmosphere of a derby,” Pospíšil said. “On the one hand it is motivating, and, on the other hand, it is necessary to take it humbly and prepare for every other match.”

A Brno team is guaranteed to be in the ŽBL championship series. ZVVZ USK Praha is not guaranteed a spot in the finals, but, given their dominance in the league over the past few years, it is hard to image that that Sokol Nilfisk H. Králové will score an upset (even though they recently beat KP Brno for the Czech Cup).

The Šelmy have a 2 games to 1 lead in their best-of-five quarterfinal series in the women’s volleyball extraliga and they will look to advance when the face visiting PVK Olymp Praha tonight (Wednesday). The match starts at 7 p.m.

KP Brno was eliminated by Dukla Liberec, 3 games to 0, in another quarterfinal series.

Volejbal Brno finished the regular season in fifth place, just behind Olymp and just ahead of KP Brno.

The Šelmy lost the first game of this quarterfinal series, before winning last Wendesday at home in three sets and then rallying on Saturday in Prague to win Game 3. The Game 3 key was Anicka Pospisilova, who scored on five serves in the fourth set to pull Brno up from a 22-19 deficit. After evening the games at 2 apiece, Olymp, according to VK captain Soňa Nováková, got tight, faulted on four serves during the shorter tiebreaking game and allowed Brno to pull away.

The Volejbal Brno men’s team is also doing well in the postseason. Brno, which finished sixth during the regular season, has a 2 games to 1 lead over third-place Kladno volejbal in the men’s volleyball extraliga quarterfinals. Brno hosts Game 4 on Thursday at 6 p.m.

If it’s springtime, then its baseball time. The Czech exgtraliga begins play this Friday and it will continue for the next nine weeks before realigning for the second half of the regular season and the fall postseason. Fifteen games are scheduled for Friday, Saturday and Sunday at fields around the country.

Brno, which fields three teams, starts with a rivalry series. The Draci will host Technika on Friday at MMB at 7 p.m., then Technicka will host 2 p.m. games on Kravi Hora on Saturday and Sunday.

Cardion Hroši Brno travels to Olympia Blansko on Friday, then hosts 2 p.m. games with Blansko on Saturday and Sunday.

Last year, the Ostrava Arrows got hot at the right time and shocked the Czech baseball world by beating Draci Brno in the best-of-five Czech Series, 3-1. It was the first title for Ostrava, a team that has been around since 1973.

Draci Brno are among the favorites in the league. They have played in 24 consecutive Czech Series and won it 21 times. Last season, they finished the regular season 26-1, won the Czech Baseball Cup without a loss and completed the 20-game playoff season 16-4 to qualify as the No. 1 seed for the finals. In the Czech Series, however, they stumbled and watched Ostrava win the 2018 title.

FC Lokomotiva-Horni Herspice held the top-scoring team in the top women’s league of the Czech Republic to a scoreless draw in the first half and gave up just two goals in their 2-0 loss at SK Slavia Praha last Saturday.

Lokomotiva will get another shot at SK Slavia this Sunday when the two teams meet again in Prague in the semifinals of the Czech Cup. The game starts at 2 p.m.

The other semifinal pits AC Sparta Praha against visiting FC Slovan Liberec across town an hour later on Sunday.

Lokomotiva earned their way into the final four with a come-from-behind road win against 1. FC Slovacko last month. Lokomotiva was down 0-2 at halftime. Then, Kaho Oshima scored on a corner kick in the 70th minute, Tessa Andujar converted a penalty kick in the 82nd minute and Laura Žemberyová scored the winner from 20 meters out in the 90th minute of play.

HC Kometa swept Hradec Králové in four games to advance to the semifinals of the Tipsport extraliga.

The semifinals, which are also best-of-seven, are scheduled for April 3 to 15. As of Tuesday night, HC Oceláři Třinec have swept HC Vitkovice Ridera, 0-4 in order to advance. Škoda Plzeň and HC Olomouc are tied at two games apiece and Bílí Tygři Liberec lead BK Mladá Boleslav, 3-1.

The Kometa offense has mostly been powered by whoever has the hot hand. Jakub Orsava scored a hat-trick in Game 1 of the quarterfinals, with assists on each of the three goals by Jan Hruška. Peter Meuller had both goals in Game 3 on Friday, putting his name in the news at the same time as the highly-anticipated Mueller Report about possible Russian interference into the United States 2016 Presidential election was officially submitted to the US Justice Department. Then, in Game 4 on Sunday, Martin Zaťovič had a hat trick.

Not exactly to the hot-hand form of the other three games, Game 2 — a 0-5 Kometa victory — nevertheless had the same names hit the board: Orsava had a goal, Hruška had a goal, Mueller had two goals, and Tomáš Vondráček (with assists from Hruška and Orsava) finished the scoring.

Goalkeeper Marek Čiliak has been in goal for all four victories.

In both the 2016-17 and 2017-18 seasons, HC Kometa sputtered in the regular season of the Tipsport extraliga only to rally in the postseason en route to hoisting the championship trophy. In this 2018-19 season a similar pattern seems apparent: Kometa finished fifth in the regular season and they have dominated fourth-place Hradec Králové in the quarterfinals.

Kometa is simply a different team in the posteason. Case in point: Brno lost all four regular-season games to Hradec Králové before winning these four quarterfinal-series games.

egoé Basket Brno Stays on the Road for Another Week

egoé Basket Brno continued its losing streak, but not for lack of trying. On Saturday at BK Armext Děčín, Brno rebounded from a terrible first quarter for several late opportunities to pull out a victory. In the end, Davell Roby had his last-second desperation shot blocked as the buzzer sounded and Brno lost, 62-60.

The losing streak is now at seven games. Earlier in the week, Brno lost at Pardubice, 73-58.

Brno’s last two victories were at the start of Group A1 play when they beat both Pardubice (Feb. 6) and Děčín (Feb. 13) at home.

Brno (10-21) continues on the road at Sluneta Ústí nad Labem on Wednesday and BK Opava on Saturday. The next home game is against Dekstone Tuři Svitavy on Wednesday, April 3 at 8 p.m.

The team has been hampered by injuries to several players, specifically Reggie Keely. Head coach Christianos Chougkaz suggested that the complete team might be back on the court in April.

egoé Basket Brno is eighth in the Group A1 standings and five games behind seventh-place Opava (15-16). Brno looks bound for the Pre-Play-Off Series where it would play against one of the top teams from Group A2 in a best-of-three series for the chance to play in the main Play-Off Bracket.

Brno, Events in Brno, Sport, Things To Do in Brno 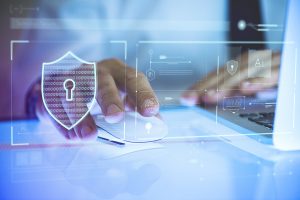 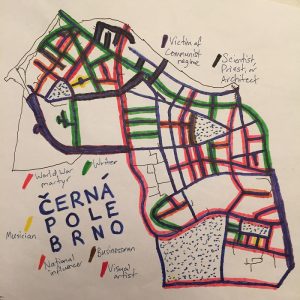 A connoisseur of the unpredictable and unscripted drama of sports.
View all posts by Bruno Zalubil →
« Line-Up For Ignis Brunensis Revealed; Norway and The Philippines Will Compete For The First Time
Passengers in Brno to Buy Public Transport Tickets with a Contactless Card From the End of the Year »