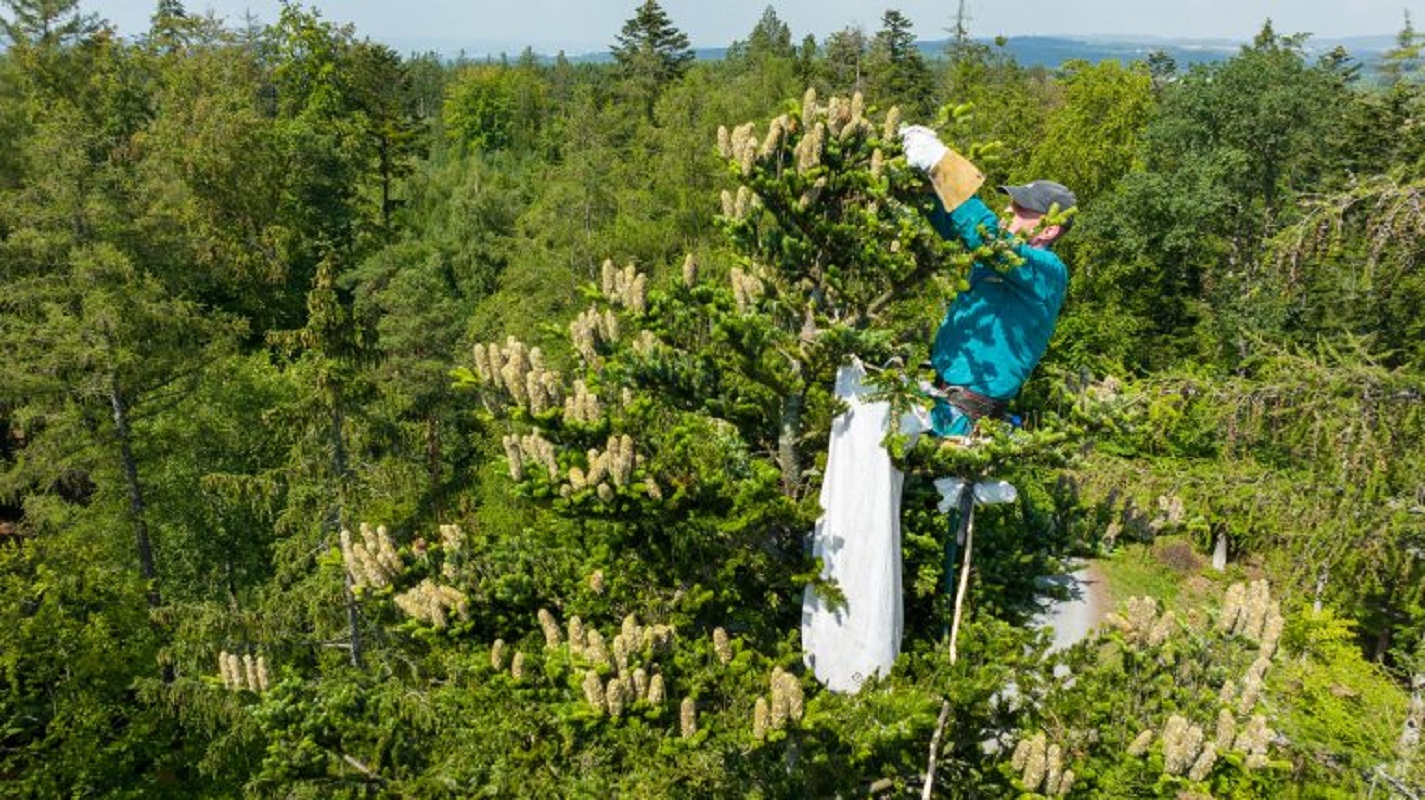 The collected seeds will serve as the basis for growing new trees. Photo credit: MENDELU.

Brno, Oct. 9 (BD) – Forest owners are in the middle of a harvest year, collecting seeds to allow for the growing of new trees. Trees in forests do not bear fruit every year, but this year is a seed year, so it is possible to collect seeds from almost all the main domestic tree species, both coniferous and deciduous. Seed collection is also in full swing at the Masaryk School Forest Enterprise in Křtiny (ŠLP Křtiny), part of Brno’s Mendel University.

Around five kilograms of Douglas fir and 25 kilograms of fir are sown each year in the university nurseries. Foresters can determine whether a given year is a seed year for conifers by plucking or shooting off a few cones from the crown of the tree before harvest, cutting them lengthwise and counting the fully developed seeds on the cut. A cone must have at least three seeds to be worth harvesting.

Seed years are spoken of in the context of forests, because in forests, tree species do not produce seeds annually. “If a tree wants to fertilise, it needs sufficient storage substances and energy to do so; it builds up its reserves through photosynthesis,” explained Kateřina Houšková from the Institute of Forest Establishment and Cultivation at Mendel University. “Trees that grow solitarily, for example in parks or meadows, have enough space to create a large canopy and therefore the necessary storage substances for the annual harvest, compared to trees in forests, which can take a year, two years or more to create the necessary reserves.”

The collection of cones is a special discipline. Experienced climbers have to climb up the trunks of trees tens of metres above the ground, up to their crowns. “We climb using a so-called harmless climbing technique. We use circumferential loops so that the tree trunk remains intact. You have to be physically fit and approach this work with respect,” said collector Miloš Budík, who has been working with ŠLP Křtiny since the 1990s.

After harvesting, the fir and Douglas fir cones are laid out in temporary warehouses in a dry, well-ventilated place, where they ripen and dry out for about a month before they begin to decompose. They are then transported to the seed plant in the same way as the fruit of other trees. Here, they pass through the ripping chambers. The hulled seeds are cleaned and returned to the nurseries where they are stored in a cool, dry place until spring sowing, or frozen for sowing in future years.

Seed years do not occur at the same time for all trees, but are usually every two to three years, with the exception of beech, which has a seed cycle of four to eight years. On the school farm, the staff already know that they can count on a crop of acorns and beeches this year.

https://brnodaily.com/2022/10/09/brno/mendel-university-foresters-carry-out-seed-harvest-for-next-generation-of-trees/https://brnodaily.com/wp-content/uploads/2022/10/forest-1024x575.jpghttps://brnodaily.com/wp-content/uploads/2022/10/forest-150x84.jpg2022-10-09T12:12:33+02:00Bing NiBrnoNewsBrno,NewsThe collected seeds will serve as the basis for growing new trees. Photo credit: MENDELU. Brno, Oct. 9 (BD) - Forest owners are in the middle of a harvest year, collecting seeds to allow for the growing of new trees. Trees in forests do not bear fruit every year, but...Bing NiBing Nibingni1992@gmail.comAuthorPh.D student in Communication Studies, a hopeless cinephile and frontier culture fanatic and fussy music appreciator.Brno Daily