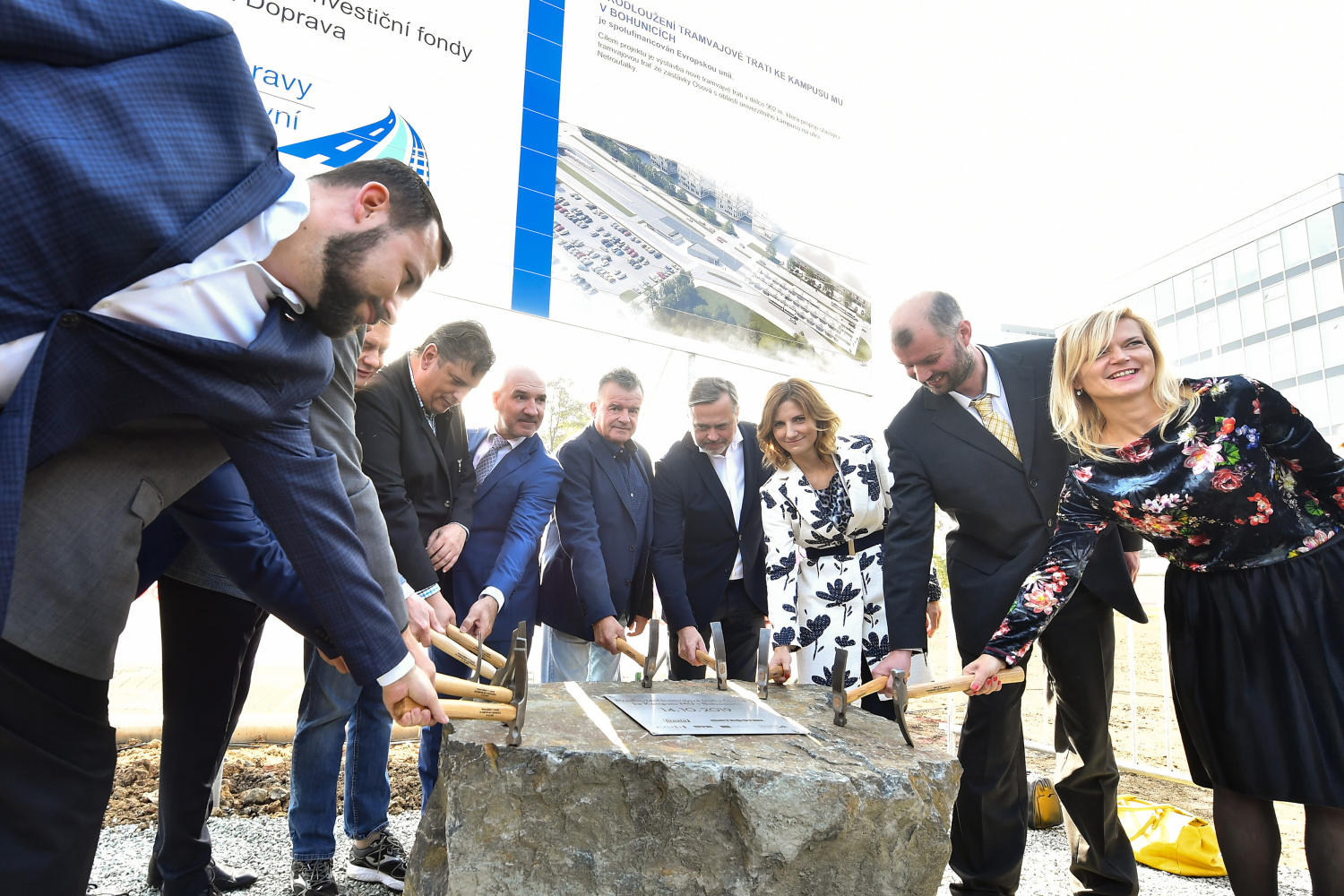 The stone was laid in the presence of Brno Mayor Markéta Vaňková and other prominent guests. The first trams are due to run on the line by the end of 2022, and will carry tens of thousands of passengers every day. Photo: MMB.

Brno, Oct 16 (BD) – A ceremony was held on Monday to mark the tapping of the foundation stone of the large-scale construction project to extend the tramline from Osova to the University Hospital and Campus. The ceremony was attended by representatives of the Czech Ministry of Transport, Brno Mayor Markéta Vaňková (ODS), and representatives of the Brno Public Transport Company (DPMB), the project contractor, and other prominent guests. Vaňková welcomed the beginning of the construction: “The construction will be of huge benefit to the area of ​​Starý Lískovec and Bohunice, where Masaryk University students and staff and patients of the University Hospital Brno travel daily. This strategic project, which will greatly ease the pressure on the congested traffic in the city, has our full support and is our top priority.”

The construction of the tramline extension, which is expected to carry tens of thousands of passengers every day, is exceptional in a number of respects. All contractual relationships within the project are based on the FIDIC International Contractual Terms and Conditions (the “FIDIC White and Yellow Book”). It is also the first urban tram tunnel to be built in the Czech Republic for over a decade. The amount of financial subsidy from the European Union is also extraordinary, adding up to CZK 1.157 billion of the total cost of CZK 1.4 billion (85% of the costs). The tram line is scheduled to come into operation at the end of 2022.

Miloš Havránek, General Manager of DPMB, expressed excitement about the project: “This is a construction project that is unparalleled in the recent history of Brno, from the perspective of public transport. The project is unique not only in terms of its scope and character, but also in terms of the amount of funding obtained through grant titles. That is why I’m glad that the City of Brno has placed trust in us and entrusted DPMB with the task of ensuring the construction.”

The new line will connect to the existing one at the Osová node, then continue through a tunnel under Mikuláškovo náměstí to Netroufalky Street. The 619-metre tunnel will run as deep as nine meters. The project envisages the construction of two new stops: Nová Jihlavská (underground) and Bohunice Hospital.

“We have started to carry out evaluations around ​Jihlavská and Netroufalky to determine the current location of individual networks. One of the most complicated is the relocation of E.ON cables, which must be carried out without interrupting the power supply to the University Hospital Brno,” said Pavel Borek, CEO of FIRESTA-FIŠER, the contractor for the project.

More visible, larger-scale work will follow in spring 2020, when work will begin digging the tunnel itself. In 2021, this work will continue, as well as the construction of the new stops, tram tracks and overhead lines. The construction will be completed in 2022, and other technical requirements, preparation of the surrounding terrain, and trial operations will take place.

Traffic restrictions expected as part of the project will include short-term closures on the trolleybus route between Osová and Nemocnice Bohunice, and closures of several months on the tram line between Švermova and Starý Lískovec.

Related: Construction for a Tram Line to Bohunice to Begin this Autumn

https://brnodaily.com/2019/10/16/news/transport/foundation-stone-laid-for-tramline-extension-to-university-hospital-and-campus/https://brnodaily.com/wp-content/uploads/2019/10/191014_zahaj_stavby_prodlouz_tramvaj_trati_Campus_foto_sch039-1024x683.jpghttps://brnodaily.com/wp-content/uploads/2019/10/191014_zahaj_stavby_prodlouz_tramvaj_trati_Campus_foto_sch039-150x100.jpg2019-10-16T09:50:16+02:00Jack StephensCzech Republic / WorldTransportBrno,Czech Republic,Tram,TransportThe stone was laid in the presence of Brno Mayor Markéta Vaňková and other prominent guests. The first trams are due to run on the line by the end of 2022, and will carry tens of thousands of passengers every day. Photo: MMB.Brno, Oct 16 (BD) - A ceremony...Jack Stephens jack.stephens50@gmail.comAuthorA writer and English teacher originally from London who has lived in Brno since 2011, interested in politics, low culture, and all things strange and/or Czech.Brno Daily