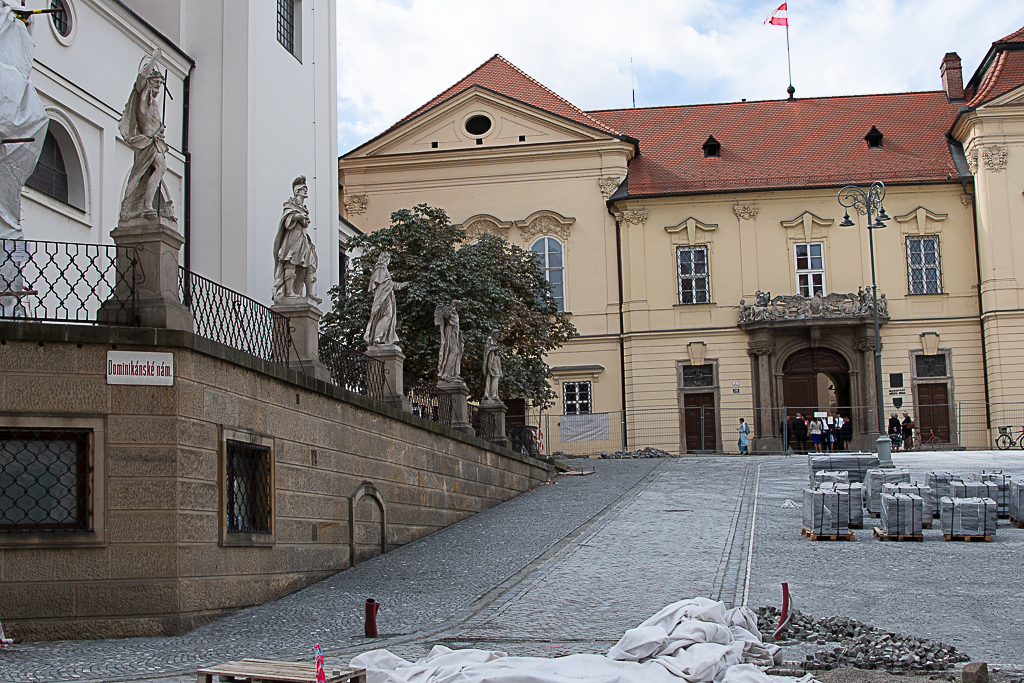 Architects and designers will have until the end of the summer to complete their designs, with the winner to be chosen by the end of the year. Photo: Dominikánské Náměstí last year. Credit: @BrnoDaily.

Brno, Mar 4 (BD) – The city is planning to install two new water features on the recently-renovated Dominikánské Náměstí. Various options have been considered, including relocating the fountain of Mercury from Biskupský Dvůr, but this was not possible due to the poor condition of the fountain. As a result, the city has decided to launch a public competition to choose a design for two new fountains.

A specification for the design will be completed by the end of March, by Brno City Hall in cooperation with the Office of the City Architect. Council Member for Culture Marek Fišer (Piráti) describes the next steps: “The public architectural competition will cover both of the water features. The goal is to create a work that can communicate and create a story in this public space. Artists and architects should have created their designs by the end of summer, and by the end of the year we would like to have selected the winning designs.”

The public art on Dominikánské Náměstí has been a frequent topic of debate. An earlier public competition to design a fountain for the square was launched in 2008, but none of the proposals were selected in the end

Last year there was a proposal for a statue of Emperor Joseph II to be installed there, but the plan was rejected by city residents in a public poll.

The square underwent several months of reconstruction last year to restore it to something more similar to its 1930s appearance, removing the parking spaces and adding benches and ten trees.

https://brnodaily.com/2019/03/04/news/city-to-launch-design-competition-for-new-fountains-on-dominkanske-namesti/https://brnodaily.com/wp-content/uploads/2018/09/September-Streets-of-Brno-for-Brno-Daily-117-1024x683.jpghttps://brnodaily.com/wp-content/uploads/2018/09/September-Streets-of-Brno-for-Brno-Daily-117-150x100.jpg2019-03-04T15:24:04+01:00Jack StephensCzech Republic / WorldArchitecture,Brno,Czech Republic,News,Urban PlansArchitects and designers will have until the end of the summer to complete their designs, with the winner to be chosen by the end of the year. Photo: Dominikánské Náměstí last year. Credit: @BrnoDaily. Brno, Mar 4 (BD) – The city is planning to install two new water features on...Jack Stephens jack.stephens50@gmail.comAuthorA writer and English teacher originally from London who has lived in Brno since 2011, interested in politics, low culture, and all things strange and/or Czech.Brno Daily

A writer and English teacher originally from London who has lived in Brno since 2011, interested in politics, low culture, and all things strange and/or Czech.
View all posts by Jack Stephens →
« Brno Zoo to Expand Polar Bear Enclosure
Unique New Mobile App Aims To Provide Services To Brno’s Drug Users and Homeless »