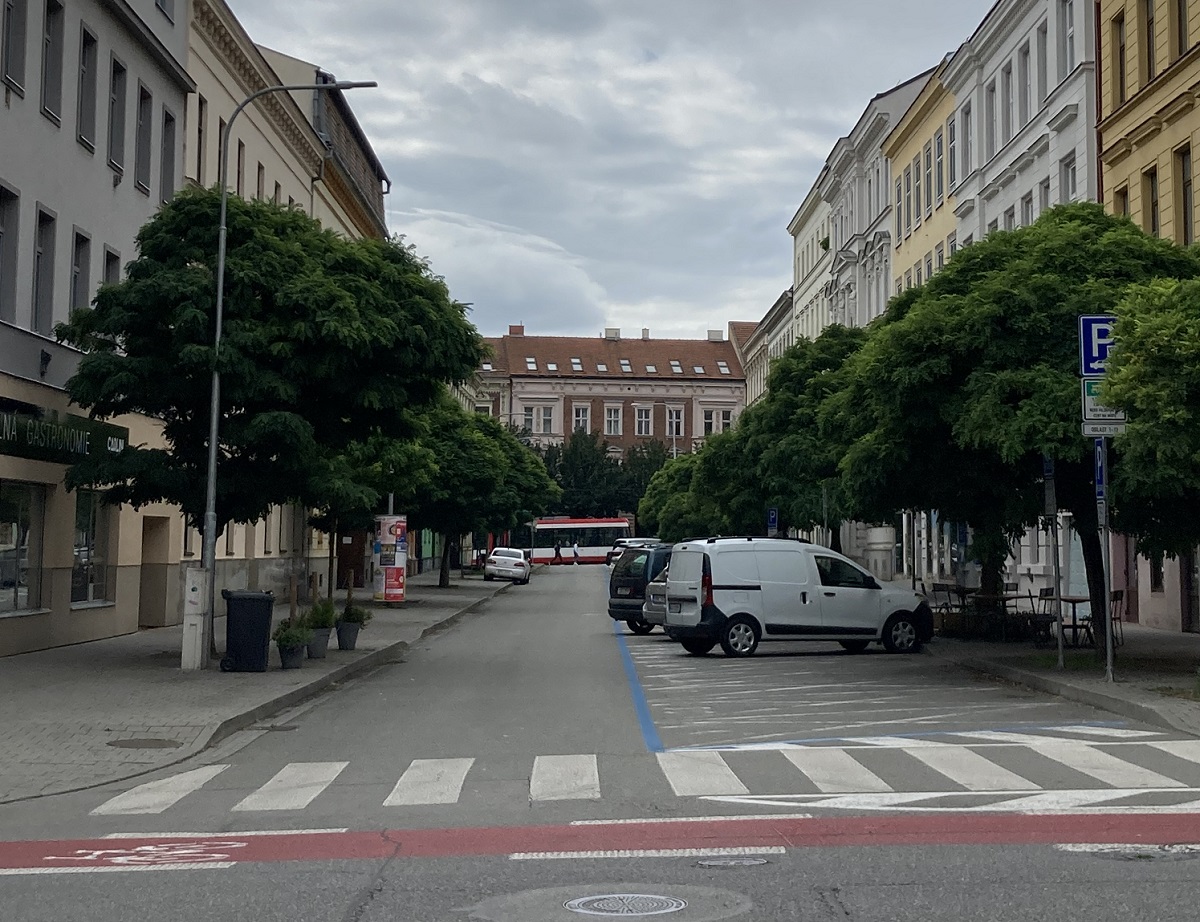 If you live in a historical part of Brno, have you ever wondered why your street has the name it does? Who the neighbours of the past were? What they did? Every street has echoes of Czech history; we will tell you the story of one street in Brno and show you how you can uncover your own street’s hidden stories and secrets.

Smetanova is unusual because its name did not change significantly during the 20th century. Street names have typically been changed for two main reasons. Firstly, up until 1918 the main language was German and so were most street names, sometimes with a secondary Czech version. After Czechoslovak independence all names were given a Czech form, but this was reversed in 1939 when Czechoslovakia lost its independence and became a German protectorate. Secondly, these changes of rule brought politics into the naming of streets, e.g. nearby Kounicova was known as Leninova from 1946 to 1990. Both these influences are apparent in the history of Smetanova.

The street first came into existence on 9 January 1877 as Hablergasse, named after Anton Ritter con Haberler, the first freely elected Mayor of the newly created municipality of Brno. He is credited with instigating a sewerage system on today’s Václavská, the building of a bridge over the Svratka River in Pisárky, the establishment of a new cemetery in Zábrdovice and many other civic works. In 1918 the street was renamed Seminářská. This commemorated the seminary of the Brno diocese which, between 1899 and 1903, was based in the building that now houses the Rector’s office of the Brno University of Technology. Nowadays, the only reference to this is in the name of the pub ‘U Semináru’.

In 1921 it became Bedřicha Smetany, named for Bedřich Smetana, one of the great Czech composers, and it has kept this association ever since in different linguistic forms. In 1939 the German Smetanagasse took over before it assumed its current name on 25 September 1946.

I had often wondered about the plaque on the building opposite ours proclaiming that Břetislav Bakala had lived there. I find out that he lived from 1897 to 1958 and was a multi-talented musician: he conducted the Brno Symphony Orchestra, played the piano, and in 1951 became a professor at the Janaček Academy of Musical Arts (JAMU). He worked in the United States to perfect his piano and organ playing and during the first world war he served in Montenegro. He is buried in Brno central cemetery and the encyclopaedia even gives the exact location of the grave.

The Brno National Theatre used to be on nearby Veveří, so Smetanova was home to many people connected to the arts. One of these was Jaroslav Auerswald, who lived at number 53, and was famed not just for his acting but also for directing and fine painting. He was often praised by other actors in their memoirs and their comments give tantalising glimpses into the person behind the name. For example, the director František Lacina writes “despite his cheerfulness, camaraderie and actorly solidarity, Auerswald was a closed person. He was and remained a bachelor, and no one really knew why.”

There are also chilling accounts such as that of a banker Arnošt Vogel and his wife Jana, who lived at number 30. The only other information about them is that they were taken from Brno on 19 March 1942 on transport Ac-387 to Terezin (the location of the Nazis’ notorious Theresienstadt Ghetto), and from there on 18 April 1942 to the transit ghetto at Rejowiec in Poland, where they were both killed.

Ing. Dr. Jaroslav Jičinský lived through several of the main phases of modern Czechoslovak history. Born under the Austro-Hungarian Empire, he lived through the Czechoslovak first republic, the German occupation and died under communism. He was born in 1870 in what is now Ostrava and followed a career in mining. He studied in Příbram and in Austria before returning to become the director of the mine in the village of Petřkovice – then in Prussia, now part of Ostrava. He married into another mining family and had two daughters. However, he was a great Czech patriot and uncomfortable in a Prussian environment, so he moved to Zastávka u Brna near Brno to take up a new position, and it was here that his son was born. He was part of the rising tide of Czech national awareness and a Czech school, and sent both his daughters to the Czech Vesna gymnasium in Brno. In 1913 he won a major competition, organised by the Danube Steam Navigation Company, to increase the profitability of coal mining in the Pécs region of Hungary. He moved there the same year and achieved such success that he was appointed a court councillor to the then regent, Horthy. He stayed in Hungary until 1930 when he retired and moved to Brno, where his older daughter and son lived. He resided at Bedřicha Smetany 45, and continued working by writing professional articles and textbooks, serving as an expert witness around Europe and lecturing. He lived in Brno till 1953, when he moved to Prague, where he died in 1959.

HOW YOU CAN DO IT

The main resource is the amazing Internetová encyklopedie dějin Brna (Internet encyclopedia of the history of Brno). Although it is only in Czech, it is quite usable with the aid of an online translator.

The first step is to select ‘ulice’ from the drop-down menu. Then put the current name of your street in the box ‘v názvu’ and click ‘Vyhledat’. There is often more than one option, so it is helpful if you know which Cadastral district you are in. If you don’t know, you can click and look at the many present-day photos to check if you have picked the right one. After that it’s up to you, to see what stories you find!

https://brnodaily.com/2022/08/07/lifestyle/down-my-street-smetanova-part-1/https://brnodaily.com/wp-content/uploads/2022/08/smetanova-feat-pic-credit-zuzana-trnakova-1024x787.jpeghttps://brnodaily.com/wp-content/uploads/2022/08/smetanova-feat-pic-credit-zuzana-trnakova-150x115.jpeg2022-08-07T16:08:06+02:00Charles du ParcBD MagazineBrno,Brno Urban Guide,HistoryIf you live in a historical part of Brno, have you ever wondered why your street has the name it does? Who the neighbours of the past were? What they did? Every street has echoes of Czech history; we will tell you the story of one street in Brno...Charles du ParcCharles du Parcchaduparc@gmail.comAuthorCharles du Parc comes originally from London and worked there in fashion retailing for several years. Before coming to the Czech Republic in 2005, he ran his own delicatessen and café in a small town on the south coast of England. He has also served as a judge for the World Cheese Awards. Having fallen in love with Brno,he now regards it as home and works there as a freelance teacher, writer and translator.Brno Daily

Charles du Parc comes originally from London and worked there in fashion retailing for several years. Before coming to the Czech Republic in 2005, he ran his own delicatessen and café in a small town on the south coast of England. He has also served as a judge for the World Cheese Awards. Having fallen in love with Brno,he now regards it as home and works there as a freelance teacher, writer and translator.
View all posts by Charles du Parc →
« Review: Splendour, Tragedy and Skullduggery at the Tutankhamun Exhibition
World Cat Day In Brno To Support Nearly A Thousand Cats In 11 Shelters »