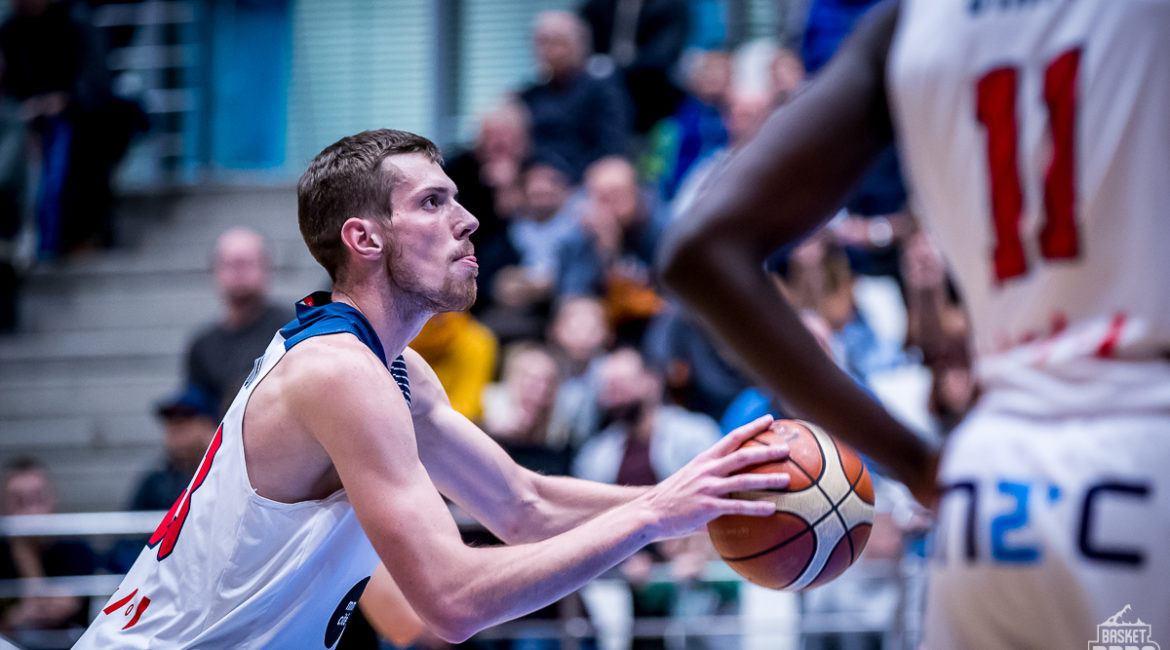 Jakub Jokl is shooting close to 65 percent from the field this season for mmcité1 Basket Brno. Photo credit: Jan Russnák.

mmcité1 Gets Another Chance to Prove Itself

mmcité1 Basket Brno has won three of its last four games. Now comes a big test that could again move the team up in the standings and provide another boost of confidence: eighth-place BK ARMEX Děčín comes to Campus Square on Saturday at 6 p.m.

Brno (3-13) beat host GEOSAN Kolín (2-14) on Sunday. The final score was 76-87 after Brno dominated the fourth quarter, outscoring Kolín 7-27. Lukáš Stegbauer and Jakub Krakovič led the way to the team’s first road win of the season. Stegbauer hit 5 of 9 3-point attempts. Krakovič was 8 of 11 from closer in. Both had 17 points.

Brno lost against each team in the league and Ústí nad Labem twice in the first 12 rounds of the Kooperative NBL season. There is an outside chance that the team could move even further into the middle of the standings in the remaining six rounds of the first part of the regular season. If they were to pass Děčín (7-9), which would likely require beating the top two teams in the league, Brno would return to Group A1 for the second phase of the regular season and be guaranteed another year in the top league. Last year was the first that they played in that more-competitive group.

The more probable scenario would be for Brno to play in Group A2, where there is a risk of relegation to a lower league. The games would be among the ninth-, 10th, 11th and 12th-place teams.

HC Kometa beat HC Sparta Praha, 5-3, on Boxing Day Thursday. Then the week got even better.

“I thank the players for their performance,” said Kometa coach Kamil Pokorný after the nine-goal performance against Karlovy Vary, which the team website called the biggest win of the team’s modern history. “They really enjoyed it along with the fans.”

Most important, however, are the nine points that team added to its season total. HC Kometa are now tied with Mladá Boleslav for fourth place with 54 points. Liberec (63 points) is atop the standings. Sparta (61) is second and Plzeň (56) is third.

Peter Mueller led the way in the game against Karlovy Vary, scoring three times and assisting on three more goals.

“From the first substitutions, I felt that, not only our line, but the whole team played perfectly and exactly according to the plan,” Mueller was quoted as saying on the team website. “We played how we wanted and it was fun for all of the lines.”

In six games since returning from two months of injury recuperation, Mueller has seven goals and seven assists.

The victory over Sparta was an important step because the team had lost four-of-five road games.

Kometa hits the road on Friday to play Mountfield HK at 6 p.m. They return to DRFG Arena on Sunday to host PSG Berani Zlín at 3 p.m.

The VK Brno Šelmy enter 2020 as the top team in the Uniqua Extraliga Ženy standings.

The Šelmy have 43 points and they will continue their fight to stay on top at Šternberk on Saturday at 5 p.m. Olomouc has 38 points. Ostrava is in third with 32. Olymp has 28, Prostějov has 27 and Liberec has 25.

Královo Pole, which is seventh place in the league, will start the new year at home against Olomouc. The game is Saturday at 6 p.m.

On Jan. 11, the two Brno teams will meet at 6 p.m. when VK Brno hosts Královo Pole. The previous inner-city match was won by the Šelmy, three sets to one, on Nov. 2.

Volejbal Brno, the men’s team in town, is tied for third in the Uniqua Extraliga Muzi standings. The team resumes its season at Kladno on Jan. 13 in a match that will be nationally televised. Two days later, Brno hosts Liberec at 5 p.m. on Jan. 15.

The league has six more rounds before late February when it will split into two groups, with the top team, probably longtime dominant team USK Praha, guaranteed the No. 1 seed in the playoffs. Group A will have home and away games for the second-, third-, fourth- and fifth-place teams. Group B has a five-round system for the sixth-, seventh-, eighth-, ninth- and 10th-place teams to determine the teams that will stay in the top league; in other words, it will determine the team that will have to play the top team from the second league to avoid relegation.

KP Brno looks like it will make Group A.

Žabiny Brno is in fifth place. Their remaining league games are against teams below them in the standings, plus BLK Slavia Praha (7-5), which is just a tick above, and, on Feb. 1, KP Brno in Královo Pole.

A connoisseur of the unpredictable and unscripted drama of sports.
View all posts by Bruno Zalubil →
« Repairs to the Bridge On the Road to Mikulov To Start in March. The Bridge Will Close for Nine Months
In Brief: New Trail For Cyclists and Pedestrians From Žebětín to Kohoutovice »