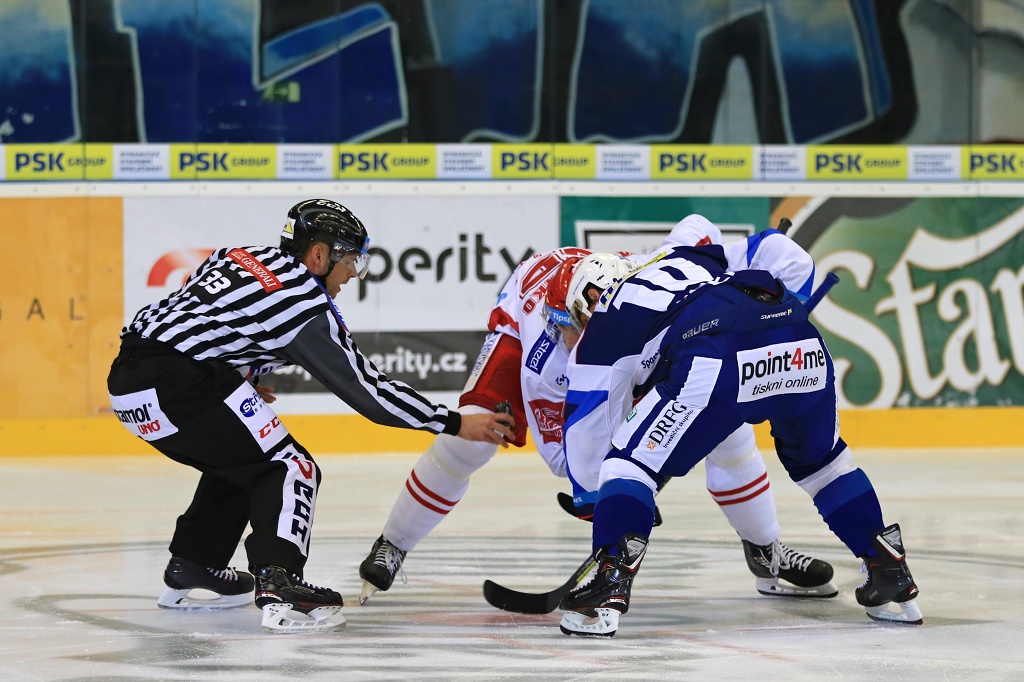 HC Kometa has struggled through the middle of the regular season of both of their recent title runs and they are following the pattern this season, too. Photo credit: Vít Novák.

Similar to the midseason swoon of the past two championship seasons, HC Kometa has hit tough times midway through the Tipsport extraliga season. The team went 3-5 in November and started December with a 5-2 loss at Liberec on Sunday.

Brno is in eighth place with 38 points, 11 points behind league-leading Třinec.

Kometa will next take the ice at DRFG Arena on Thursday against Sparta at 6 p.m.

During the 2016-17 and 2017-18 title runs, Brno struggled during the middle of the season only to get hot late and dominate the postseason.

On Tuesday, the team also dug itself a big hole in the Hockey Champions League when it lost 1-4 in front of its home crowd in the first game of the quarterfinal series against the Frölunda Indians. Brno took the lead in the 10th minute when Bedřich Köhler scored. But, Frölunda evened the score just before the first-period break and added three more goals in the second period. Kometa were outshot 17-31.

The Champions League quarterfinal series continues on Tuesday in Sweden.

Two big-name players have yet to make appearances for the team. Martin Erat, 37, one of the leaders of the past two championship seasons, is getting into playing shape. Tomáš Plekanec, 36, another former NHL and international star may take the ice on Thursday against Sparta.

MU maintained control of the game, building to a 4-0 lead.

The Cavaliers, who have one win and three points, mounted a comeback with two third-period goals, but they ran out of time.

Pospíšil was introduced during a press conference on Monday. Zdeněk will stay with the organization to work with the youth program.

Pospíšil, 35, previously coached Piešťanske Čajky in Slovakia. He was also an assistant coach for the Slovak women’s team. This year, he served as the youth coach for USK Praha.

His first two games with KP Brno will be Eurocup, Group G, road games: at Reyer Venezia tonight (Wednesday) and at Nantes Reze next Wednesday.

Pospíšil’s first league game will be at U19 Chance on Dec. 16. His first home game won’t be for a month; DSK Basketball Nymburk comes to Kralove Pole on Jan. 5 at 3:30 p.m. (The game against cross-town rival Žabiny Brno, which was to be played this weekend, has been moved. The time and date are to be announced.)

During the transition period, assistant coach Andrea Kuklová stepped in to lead KP Brno to a dominating victory on Saturday, beating Slovanka MB, 88-42.

In other local news, Žabiny Brno travelled across town to play at Teamstore Brno and win, 47-93, last Friday. Žabiny Brno (7-3 in the ZBL) then hit the road for international games. They will be in Piešťany, Slovakia for two CEWL games this weekend.

egoé Basket Brno won its first game in six weeks when it outscored Zalakeramia ZTE KK in every quarter and won its final Alpe Adria Cup game, 86-63, at home on Saturday.

Unfortunately, despite playing well at home, Brno finished Group C play with a 2-4 record from six games and will not advance. ZTE KK (4-2) was guaranteed to move on in the tournament as one of the top two teams of the group.

The Alpe Adria Cup includes 16 teams from seven countries, Austria, Croatia, the Czech Republic, Hungary, Slovakia, Slovenia and Poland. Brno almost won all three home games: it opened the tournament with a one-point victory over BK Klosterneuburg Dukes on Oct. 10; then on Nov. 27, it lost by two to BC Adriaoil Skrljevo.

The last time egoé Basket Brno won a game was Oct. 14 when it beat BK Armex Děčín. Since then, second-year coach Dejan Jakara was replaced by Chris Chougaz. After Chougaz took over the team, Brno lost twice in the domestic league and once in the Alpe Adria Cup. This was his first victory with the team.

Zbrojovka is in seventh place with a record of 6-5-5 and 23 points through the autumn half of the Fortuna:Narodni Liga. Young players have been getting a lot of playing time and they are clearly the future of the team. Injuries have limited playing time for several name-players. Saving money on salaries makes sense. And, according to the team website, it is time for “oxygenation and to increase resilience”.

These are just some of the likely reasons that Zbrojovka ended the contracts with four of its popular players last week. Czechs Dušan Melichárek, the goalkeeper captain, and long-time player Milan Lutonský were let go. Wing Musefiu Ashiru and defender Chico Gomes, two foreign players, will also not continue with the team.

League play will resume on March 2 and run through May 25. Zbrojovka starts the spring half of the season at Chrudim. The first home game is scheduled to be against Žižkov on March 10 at 6 p.m., although the date and time are subject to change.

Brno is 12 points behind league-leader SK Dynamo Č. Budějovice (11-2-3, 35 points). FC Vysočina Jihlava (10-3-3, 33) is second and FC Hradec Králové (9-3-4, 30) is third. At the end of the season, the top team is automatically promoted to the top league. The second- and third-place teams will have to play home-and-away games with the 14th and 15th-place teams of the top league in late May.

https://brnodaily.com/2018/12/05/sport/brno-sports-weekly-report-kometa-slipping-in-standings-host-sparta-thursday/https://brnodaily.com/wp-content/uploads/2018/12/Kometa051218-1024x682.jpghttps://brnodaily.com/wp-content/uploads/2018/12/Kometa051218-150x100.jpg2018-12-05T17:32:14+01:00Bruno ZalubilSportBrno,News,SportHC Kometa has struggled through the middle of the regular season of both of their recent title runs and they are following the pattern this season, too. Photo credit: Vít Novák.Brno, Dec. 5 (BD) — KP Brno replaces head coach, egoe Basket Brno rights the ship with a victory,...Bruno ZalubilBruno Zalubilbzalubil@hotmail.comAuthorA connoisseur of the unpredictable and unscripted drama of sports.Brno Daily

A connoisseur of the unpredictable and unscripted drama of sports.
View all posts by Bruno Zalubil →
« Brno’s “Head of Medusa” Confirmed as a Rubens Original. From December, the Medusa is on Display Alongside Its Viennese Counterpart in Austria
Video: Náměstí Svobody Saw a Christmas Kiosk on Fire on Monday Night »