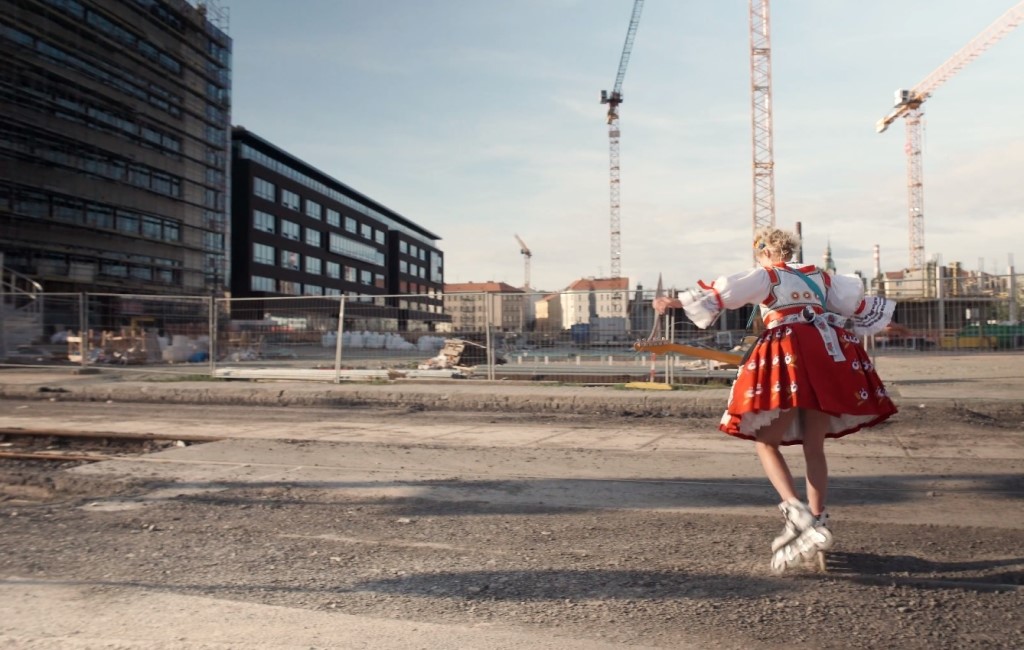 Since the spring of this year, Brno has been promoting the city with a tourist campaign named “#brnotruestory”. As its name suggests, the campaign attempts to attract visitors to Brno with the authentic experiences of local people. Title photo: GOtoBRNO on Facebook.

The video opens with Mucha putting on the costume. We later see her skating through the underpass under the main station repeatedly singing “Brno smrdí.” (“Brno smells”). After that, she pops up in a vegetable stand and exclaims “Brno voní.” (“Brno smells good.”). She also comments on life in Brno, with contradictory statements such as, “Brno is a great city” and “We have good coffee, better than in Italy”, and then later “There is nothing here, don’t come here”. All this is a part of the official campaign to promote tourism in Brno.

#brnotruestory presents the city in various media, such as videos or gifs, with stories about what makes it a great place to live, loops of moments from everyday life, or stories of foreigners living in Brno.

The campaign’s cost is an estimated 3.6 million CZK. This includes strategic brand management, an online campaign in 16 countries, and of course, the production of photos and video content. The campaign directs traffic to the city’s official tourist portal, gotobrno.cz.

“Brno is now releasing three stories, 15 short ads and 15 fun gifs. In the future, a series with expats and famous personalities will be expanded,” says Kateřina Gardoňová from the City of Brno’s Press Office.

Mucha’s “LOVE&HATE BRNO” video has received a mixed response on social media, mainly positive. “Brno? You can either love it or hate it,” reads the video description on Facebook. One of the most popular comments under the video says: “I disagree!!! You either love Brno or you haven’t been here yet.”

https://brnodaily.com/2018/10/16/breaking-news/brnos-tourist-campaign-brnotruestory-centres-around-authentic-experiences/https://brnodaily.com/wp-content/uploads/2018/10/mucha-brno-smells-video-1024x650.jpghttps://brnodaily.com/wp-content/uploads/2018/10/mucha-brno-smells-video-150x95.jpg2018-10-18T09:48:16+02:00BD StaffNews - ArchivedBrno,News,TouristSince the spring of this year, Brno has been promoting the city with a tourist campaign named “#brnotruestory”. As its name suggests, the campaign attempts to attract visitors to Brno with the authentic experiences of local people. Title photo: GOtoBRNO on Facebook. Brno, Oct 16 (BD) - In the latest...BD StaffBD Staff team@brnodaily.czAdministratorBrno Daily - English News and Events in Brno.Brno Daily