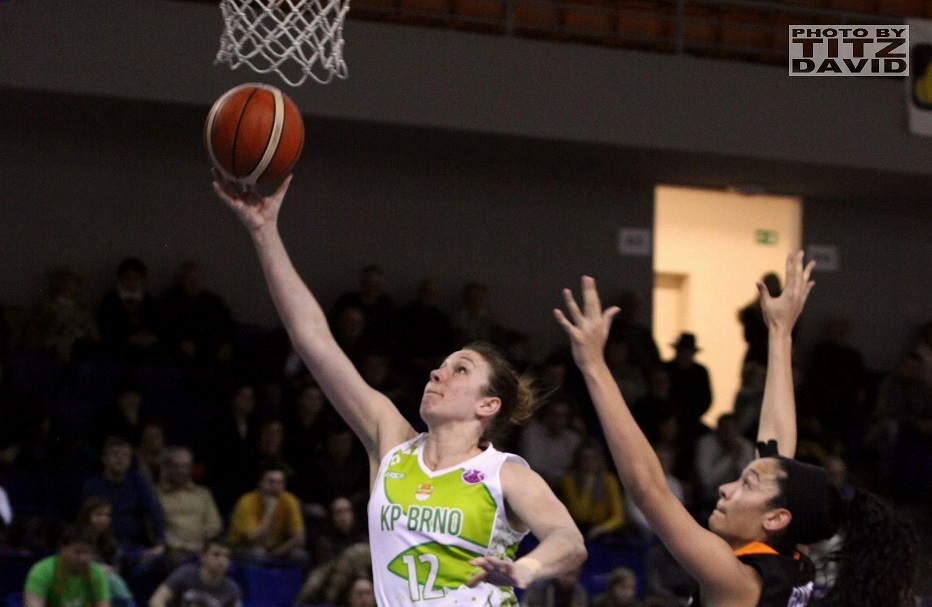 KP Brno held off its semifinal opponent from last year when they beat host DSK Basketball Nymburk, 75-77, on Sunday. This week, KP Brno (2-0 in the ZBL) will play twice in Brno. They host BLK Slavia Praha tonight (Wednesday) at 5:30 p.m. and they travel across town to play at Teamstore Brno on Friday at 8 p.m.

Against Nymburk, KP Brno, the runner-up in last year’s season, was led by two new players: Michaela Stará, who hit an important late 3-pointer from the top of the key, had a game-high 23 points and Stephanie Madden added 16.

The third Brno team will continue a busy week. Žabiny Brno hosted perennial champion ZVVZ USK Praha on Tuesday and lost 58-83. They are now 2-1 through three rounds of the ZBL. This weekend, Zabiny will have three home games in three days at Sport hala Rosnička Brno as part of the European Women’s Basketball League. They play Horizont Belarus on Friday at 6 p.m.; Kibirkstis Vilnius on Saturday at 4 p.m.; and Piesťanské Čajky on Sunday at 1:30 p.m.

The Ostrava Arrows got hot at the right time and shocked the Czech baseball world by beating Draci Brno in the best-of-five Czech Series, 3-1.

It was the first title for Ostrava, a team that has been around since 1973.

The Draci who had lost only five out of 47 games during the regular and playoff sections of the season, lost Game 1 at home, Game 2 in Ostrava and, on a chilly Friday night, Game 4 in Ostrava.

Terrell Joyce, the best hitter in the league, hit two-run home runs for Ostrava off of arguably the best pitchers in the league: Radim Chroust in Game 1 in Brno and John Hussey in Game 4 in Ostrava.

The final game was a rematch of the pitching duel of Game 2. John Hussey, the losing pitcher of Game 2, took the mound for the Draci and went 6 2/3 innings, struck out seven and walked none. Among his six hits was a fifth-inning two-run home run by Joyce.

The Draci were playing in their 24th consecutive Czech Series. They had won the title 21 times, including the previous two years. They finished the regular season 26-1, won the Czech Baseball Cup without a loss and completed the 20-game playoff season 16-4 to qualify as the No. 1 seed for the finals.

Arrows Ostrava were 22-5 and 14-6 in the two parts of the season. They beat Eagles Praha in September to reach the Czech Series. Previously, when the Draci and Arrows had faced each other this year, Brno had won six of the seven games.

After dropping its first game, egoé Brno rebounded with two wins, beating Olomoucko, 86-90, and, in their home-opener, beating NH Ostrava 77-68, on Saturday.

The difference was 3-point shooting: Brno went 25 for 47 from long range in the two wins. Radek Farsky, an 18-year-old, was 7 of 8 in the two games. Lukáš Stegbauer was 4 of 5 in the first game.

Brno head coach Dejan Jakara, conceded that the long ball was an important part of the wins, but he was particularly concerned after the Ostrava game: “Overall, it was not a good match for us. They had too many offensive rebounds and we had some stupid turnovers. We did not use what we worked on for defense. We need to work on this.”

The three American players are carrying the majority of the scoring, with double digits in all three games so far. Davell Roby led with 18 points in Olomouc; Reginald Keely and Deremy Geiger shared top-scoring honors with 17 points apiece against Ostrava.

HC Kometa, the two time domestic league title holders, host EV Zug today (Wednesday) at 6 p.m. in the Champions League. They are 3-1 in their previous games. Group D play will continue with Kometa travelling to Switzerland for the away game with EV Zug on Tuesday.

In the Tipsport extraliga, Kometa split, losing at Mountfield HK 4-2 on Friday and beating
Karlovy Vary 5-3 at home on Sunday.

Kometa are currently in seventh place, but only five points off the league leaders. Kometa plays Litvínov, one of those league leaders, at home at 6 p.m. on Friday.

Despite a 45-29 advantage in shots on goal, HC Masaryk University needed extra time to beat Diplomats Pressburg, 5-4 on Tuesday.

Captain Peter Bustin scored the winning goal in the 65th minute. It was his second of the game. MUNI is now 2-0 in European University Hockey League.

Results from the Brno Cavaliers game at Prague Engineers were not available.

Zbrojovka traveled south to play Moravian neighbor Znojmo and came back with their first three road points of the season.

Damián Bariš scored in the 17th minute and the defense held through to the end.

“The match was unnecessarily aggressive in some stages,” said head coach Pavel Šustr, “but I was convinced that we were playing the football we wanted to play. The only pity is that we did not convert some promising opportunities. We could have done much better.”

Zbrojovka (4-4-3 with 16 points) is in eighth place in the Fortuna:Narodni Liga.

After a break for international play, Zbrojovka will play next at home against Sokolov at 6 p.m. on Sunday, Oct. 21. Then, they travel to second-place Hradec Králové on Saturday, Oct. 27 for a game that will be televised by ČT Sport at 5:15 p.m.

After two weeks of rest, Lokomotiva Brno-Herni Herspice will resume play in the top women’s football league when they host 1. FC Slovácko at 11 a.m. on Saturday.

The following two weekends will also have home games, featuring AC Sparta Praha on Oct. 20 and FK Dukla Praha on Oct. 27. In between, Lokomotiva will travel to FC Hradec Králové for a game that was rescheduled to Tuesday, Oct. 23.

« Brno to Get a New Mayor as ODS Form Surprise New Coalition, Sidelining ANO
10-13/10 One of the Oldest Film Festivals in the Czech Republic Returns to Brno this Month »