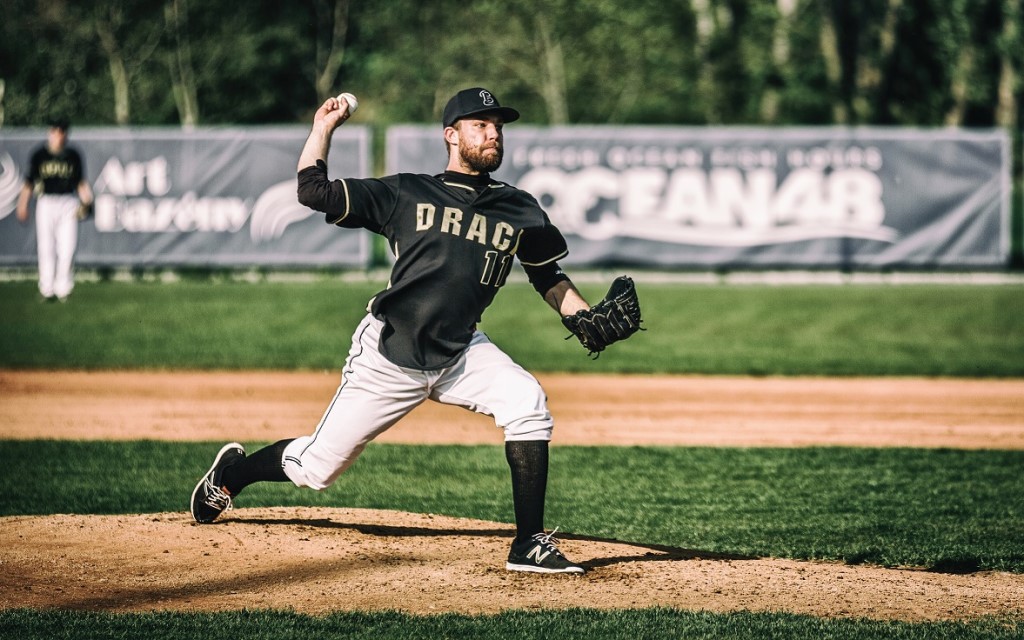 For those who follow sports, the extra bite of autumn weather can mean only one thing: postseason baseball.

Brno Draci will face Arrows Ostrava in the Czech Series of the baseball extraliga. Game 1 is Friday at MBS.

The Draci have advanced to 24 consecutive Czech Series. They have won the title 21 times. And they have been dominant all season, finishing the regular season 26-1, winning the Czech Baseball Cup without a loss and completing the 20-game playoff season 16-4 to qualify as the No. 1 seed for the finals.

“We are playing good and solid all season,” said manager Arnošt Nesňal.

Arrows Ostrava were 22-5 and 14-6 in the two parts of the season. They beat Eagles Praha earlier this month to reach the Czech Series.

When the Draci and Arrows have faced each other this year, Brno has won six of the seven games.

Statistically, the Draci are exceptionally strong in pitching. Three of the top four earned-run averages from the playoff part of the season were posted by Draci pitchers: Radim Chroust (1.85), John Hussey (2.38) and Petr Minařík (2.66). Marko Vykoukal, the top Arrows pitcher, had an ERA of 1.88.

“John Hussey is doing great and Radim Chroust is basically the best Czech pitcher right now,” Nesňal said. “We are strong. We very rarely go over our limits because we have a lot of depth in the pitching rotation.”

A battle to watch will be how Draci pitchers handle Ostrava’s Joyce Terrell. So far this season, they have had the upper hand, according to Nesňal, but Terrell’s statistics are impressive: .426 batting average with 13 home runs and 37 RBI in his last 20 games.

“We have nine hitters who can produce some solid numbers, get on base and run the bases,” Nesňal said. “It makes our offense very effective.”

The title will go to the team that can win three of five games. Game 2 will be on Saturday in Ostrava. Game 3 will be Sunday in Brno. If necessary, Game 4 would be Oct. 5 in Ostrava and Game 5 would be Oct. 6 in Brno.

HC Kometa split their two games last weekend as they work towards their home rematch with Oceláři Třinec on Sunday.

Brno went to Olomouc to beat their strong Moravia neighbors, 1-2, after an extra-time shootout.
Then, on Sunday at DRFG Arena, Kometa let Mlada Boleslav score two third-period goals and leave town with a 0-2 win.

Kometa, the two-time defending champions, are in fifth place with eight points through two weekends of Saturday-Sunday games.

This weekend has two more back to back games: in Pardubice on Saturday then Třinec comes to town Sunday to get revenge for their loss in the 2018 championship series. The latter game will be on ČT Sport.

The Brno team improved itself by adding more offense. Václav Karabáček, 22, has had a lot of international success and he will soon wear No. 18 for Brno.

University Battle: HC Masarykova X Gladiators Trenčín
The Czech Republic does not have a robust college sports system like in North America, but hockey offers a slight exception: HC Masarykova plays in a college league that features young student athletes — and a top level of play.

The season league starts later in the fall, but tomorrow HC Masarykova will host Gladiators Trenčín in the Cesko-Slovensky University Battle in DRFG Arena. The game starts at 6 p.m. Tickets are still available.

Overall, Zbrojovka is 2-2-0 in their past four games, with a a 1-2-0 record in three Fortuna:Narodni Liga games and a victory in the MOL Cup. Not bad for the new coach, Pavel Šustr.

That streak will be tested over the next five days in two home games.

Tonight, Zbrojovka hosts FC Liberec in the third round of the MOL Cup at 6 p.m. Liberec, a team that is familiar from when Zbrojovka played in the top league, is currently in the lower middle of the Fortuna Liga standings with a record of 2-4-3 with 10 points.

Then, on Sunday, Zbrojovka will play Varnsdorf at 3 p.m.

Zbrojovka settled for a 1-1 tie at Pardubice on Saturday morning in their most recent league game. They are now 3-3-3 and in ninth place with nine points. They are, however, the top scoring team in the league with 18 goals, including eight by Lukáš Magera.

“We did not enter the match well and we did not manage to play how we wanted,” Šustr said. “We did not get into our combinations. The opponent got the first movement into the lead and it took us almost a half to shake it off and get into the game.”

Pardubice was weakened when it lost a defender to a red card early in the second half. Zbrojovka scored soon thereafter when Magera’s free kick bounced off the wall of defenders and Dominik Kříž, an 18-year-old who had entered the game minutes earlier, one-timed the free ball into the upper right corner of the goal to tie the game. A flurry of activity at the end resulted in no change to the score.

Jade Abarca scored in the 76th minute for Brno-Horni Herspice, who had been down 0-6 at halftime.

In October, after a week off, there will be three consecutive weekends with home games: 1. FC Slovácko on Oct. 13, AC Sparta Praha on Oct. 20 and FK Dukla Praha on Oct. 27.

« In Pictures: Architects’ Competition for Ideas for Mendlovo náměstí
Can I Drive in the Centre of Brno? Residential Parking Explained in Detail »