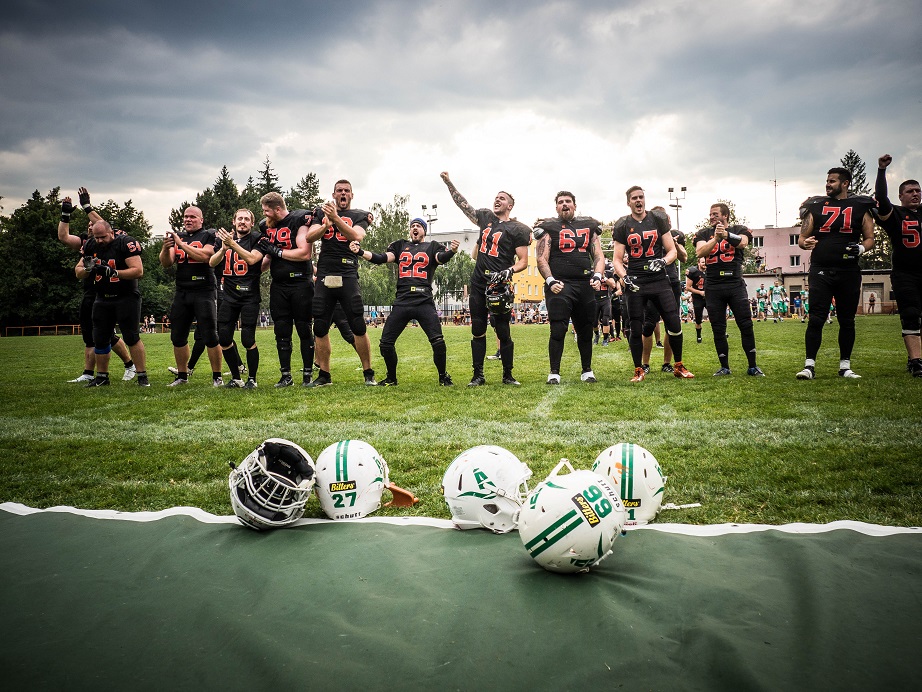 The Brno Sígrs have established themselves as the top American football team in Brno. Photo credit: František Krečmer

In a battle that had playoff implications on the line, the Brno Sígrs picked up momentum in the second half and never looked back as they established themselves as the top local American football team, beating the cross-town rival Alligators, 7-42, on Sunday.

The Sígrs are likely to advance into the playoffs. The Alligators were eliminated from the postseason.

The Sígrs, a team which started six years ago and is playing the top league for the first season, earned some retribution for a tough first-game-of-the-season loss to the Alligators, who blocked a field goal attempt and ran the ball back for the winning score with no time on the clock.

Two-and-a-half months later, the Sígrs stayed in fourth place in the Bitters League with a record of 4-5.

The Sígrs host their nearest rivals, the Pardubice Stallions (3-6), on Sunday at 3 p.m. When these teams met last, the Sígrs won in Pardubice, 0-42, on April 29. This time, in the regular-season finale, the Sígrs would have to lose by several touchdowns to be denied the fourth spot in the playoffs.

Of course, finishing fourth means that they will play at the top team in the league: the undefeated Prague Black Panthers on July 8.

The Alligators (2-7) finish the season against the last-place Pilsen Patriots at home on Saturday at 4 p.m.

Both local teams play their home games at Ragby Bystrc. Click here for a map.

In the rivalry game on Sunday, the Sígrs got on the board in the first quarter when midseason pickup Henri Väänänen hit Michal Rosa for a 17-yard touchdown.

The Alligators answered with a special-teams touchdown: Michael Campbell returned a punt 19 yards with 9:20 left in the second quarter. That was their final scoring play because the Alligators offense was not able to add any points.

Before the half was over, Jimmi Nannberg converted a 23-yard field goal to put the Sígrs up 10-7 and they never looked back. Michael Lindsey scored on touchdown runs of 9 and 24 yards, then hit Igor Mašlanka for a 72-yard passing touchdown, putting the Sígrs up 7-29 after three quarters. In the fourth quarter, Tyrone Clark returned an interception 42 yards for a score and Lindsey added a third rushing TD — from 29 yards — in the final seconds of the game.

The first part of the extraliga season has ended with Draci Brno atop the standings with a solid 26-1 record. The team from South Brno has a four game jump on second place Arrows Ostrava (22-5) and a seven-game lead on Eagles Praha and Kotlarka Praha (19-8).

Cardion Hroši Brno (17-10) lost two out of three games last weekend and lost a chance to move up in the standings. They will, however, move forward to play among the top teams when the league reshuffles and continues in mid-July: the top six teams will play against each other for seeding postseason purposes; the bottom four teams will play the top teams of the lower league for the right to stay in the extraliga next year.

Technika Brno (3-24) lost all three games last weekend and finished the first part of the season in last place, 23 games behind Draci Brno and two games behind next-to-last Skokani Olomouc (5-22).

Baseball will pause for international tournaments until mid-July. The next phase of the league will begin July 20 and go into September.

The three Brno teams have 10 players on the East team for the extraliga All-Star Game. The game is in Prague and starts at 7 p.m. A home run derby is at 4 p.m.

Much of the starting pitching staff of Draci Brno were named All Stars, including Ondřej Furko, Radim Chroust and Wesley Roemer. Draci will also be represented by first-baseman Pavel Budský, second-baseman Jakub Hajtmar, third-baseman Přemek Chroust and outfielder Adam Hajtmar. Draci assistant coach Hynek Čapka is the head coach for the East side.

The Hroši will be represented by Jakub Ondráček at second base, Vojtěch Menšík at shortstop and Miroslav Menšík as the first-base coach.

Shortstop Michal Klimeš is the only representative of Technika.

« Participatory budgeting: Brno citizens can choose between 133 projects in 2018
Grinding of tram tracks by night to improve passenger comfort and reduce noise in the city »