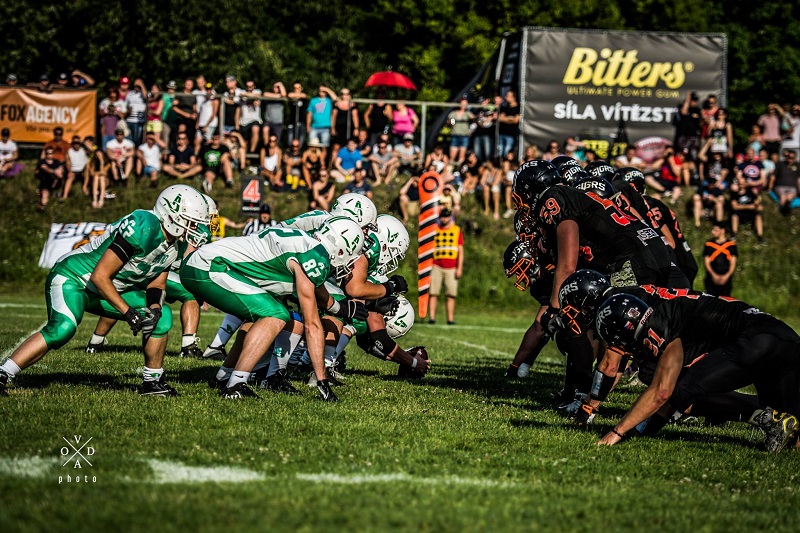 Among the most memorable games in the American football history of Brno was earlier this year. With time running out, the Sígrs lined up for a field goal attempt that would have won the game. The low trajectory, however, resulted in a blocked kick that Jan Nestr of the Alligators picked up and ran 72 yards for the winning score.

It was shocking. It was exciting. It was only the first game of the year. Moments after the game,

Sígrs head coach Petr Švanda had little to say, except: “We can expect a good rematch.”

For some added intrigue, both teams are in a fight for the postseason. The regular season ends at the end of June and only the top four teams will advance. The top three teams are basically established:

The final playoff spot, however, is up in the air. Three teams have a chance at snatching it: Brno Sígrs (3-5), Pardubice Stallions (3-5) and Brno Alligators (2-6).

The Sígrs went to Prague to play the Black Panthers last weekend and lost 53-7. The defense gave up more than a third of the points they had allowed in the previous seven games. In the fourth quarter, Henri Väänänen scored on a 2-run to stave off the shutout. Väänänen is a mid-season addition to the team who may be the difference this weekend.

The Alligators lost 39-27 in Pardubice.

The Brno teams established a natural rivalry in the second league last year that ended in the Bitters Silver Bowl XII; the Alligators put together a fourth quarter rally to win, 38-31.

Both teams finish this year’s regular season with home games: The Alligators will face the last-place Pilsen Patriots on Saturday, June 23, at 4 p.m.; and the Sígrs will host the Pardubice Stallions on Sunday at 3 p.m.

The final week of the Czech extraliga regular season is upon us and the final day — Sunday — has several attractive games.

First-place Draci Brno (23-1) have a three-game lead entering the final three games. They will finish up against second-place Arrows Ostrava (20-4) at home on Sunday at 2 p.m. It may prove to be a preview of the Finals later this year.

Cardion Hroši Brno (16-8) and Eagles Praha (16-8) are in a fight four fourth place in the standings. They meet Sunday at the Hroši Sports Complex at 1 p.m.

Meanwhile, Technika Brno (3-21) will try to get out of last place when it travels to Olympia Blansko (5-19) on Friday at 7 p.m. Then Sunday, Technika goes to Tempo Titans Praha for a 2 p.m. game; Technika beat the Titans, 2-0, on Saturday in Brno.

All three local teams play Friday, Saturday and Sunday. See the schedule below for more details.

The postseason starts later in the summer.

Draci Brno lost all four group games last week at the European Champions Cup in Rotterdam. In the final game of their tournament, Wesley Roemer shut out L&D Amsterdam (NED) so that the team could return to the Czech Republic with a positive.

In that final game, on Saturday, the Draci put together a solid all-around team performance. Roemer had five strikeouts and allowed just four hits and no walks through his nine innings. Dondrei Hubbard had two home runs. Petr Čech went 3-for-4 with three RBI.