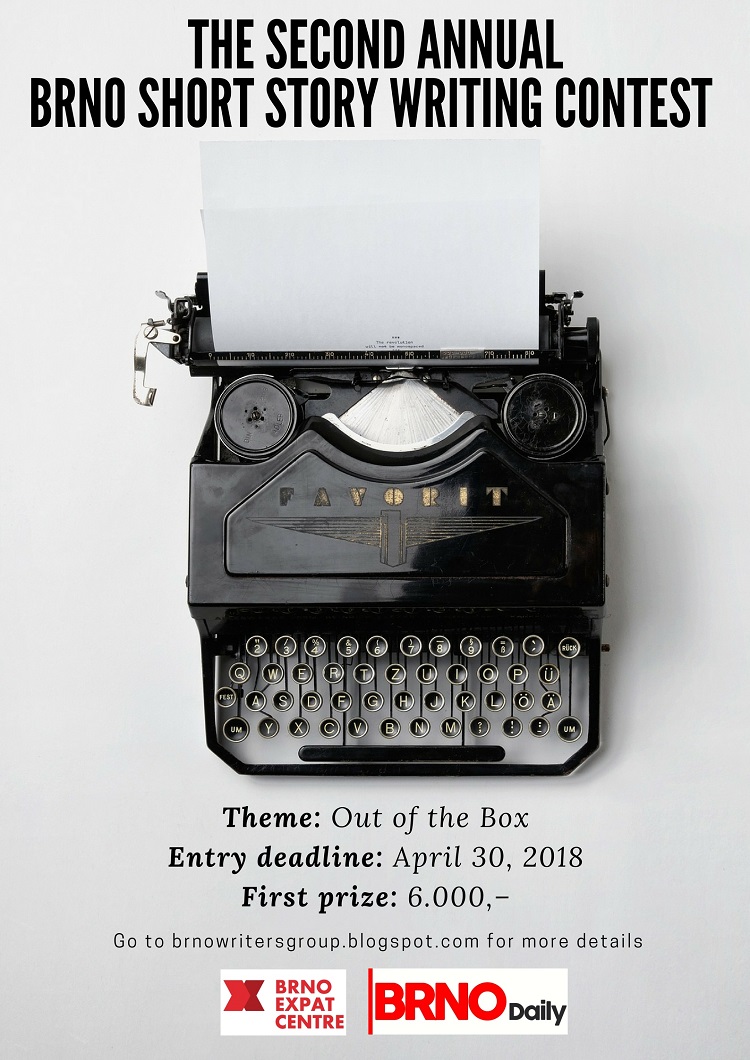 And, after a generous donation to make it possible, two stories tied for third place and receive 1,000kc each: “What If Mo Stood For Moses” by Englishwoman Jessica Sofizade and “Out of the Box” by Englishman Simon Botten. Seven additional stories were given Honorable Mention.

The contest attracted writers from many different backgrounds. Non-native speakers made up a large part of the contestants, including more than half of the recognized stories, showing the growing level of English fluency within the Brno community.

Derhak, born in Canada and raised in the United States, was inspired by a day trip to Mikulov and his discovery that jazz legend Karel Krautgartner was from there. The story is set in 1988 during the Cold War, includes several characters with mysterious motivations and revolves around a strange piece of sheet music named ““Over the Fields under Bile Karpaty”. His own description: “This is a story of unexpected encounters, with a little jazz, one hot potato, a dash of stealth, and a promise kept.”

Click here to read “Over the Fields under Bile Karpaty.”

Morawski earned Honorable Mention in the 2017 contest with “The Endless Renouncement of Feelings.”

The free contest attracted 51 entries. Every entry had to include the theme “Out of the Box” in some significant way. There was only one entry per person. The short stories had to be in English and 2,500 words or less. The deadline was April 30 at midnight. The original prize pool was 9,000kc, but another 1,000kc was added by an anonymous donation to allow for the third-place tie.

All of the award-winning stories and the honorable mention entries are available at www.brnowritersgroup.blogspot.com .

The jury included a cross-section of local cultural icons and writing enthusiasts: Don Sparling, a co-founder of the Brno Expat Centre and a longtime leader in the local expat and Masaryk University communities; Tomáš Kačer, a teacher in the Department of English and American Studies at MU and a translator; Anna Formánková, a translator and a book editor at MOBA Publishing House; and contest co-founder and Brno Writers Group co-founder Lee Adams, the At the Movies blogger for the Brno Expat Centre.

Each story had to include the theme “Out of the Box” in some significant way. The story was the most important aspect, including writing, originality, character development, and plot development. It was understood that most of the entrants would not be native English speakers and that, in fact, this may have been their first attempt to write creatively in English. All entrants should have endeavored to adhere to the rules of English; however, spelling and grammar were not critical for success.

Brno Daily (brnodaily.cz) and the Brno Expat Centre (brnoexpatcentre.eu) were both media sponsors of the Brno Short Story Writing Contest.

The Brno Short Story Writing Contest was made possible by anonymous donations.

A connoisseur of the unpredictable and unscripted drama of sports.
View all posts by Bruno Zalubil →
« Brutal assault in the centre of Brno over the weekend
Zeman appoints Babiš prime minister for a second time »