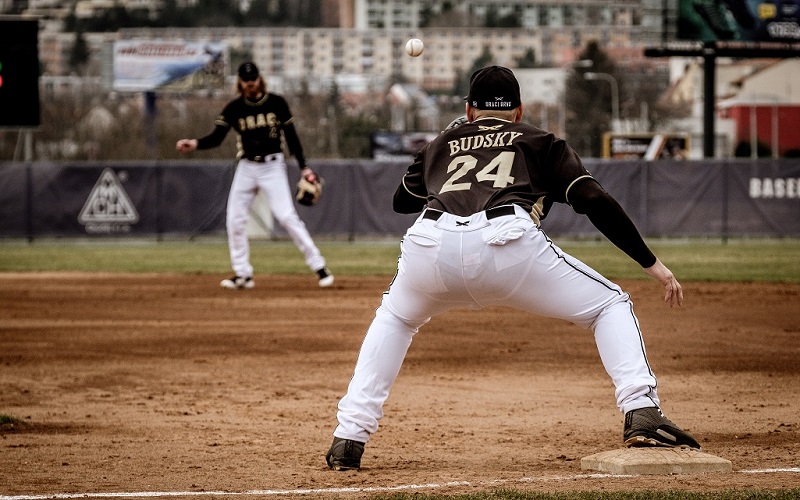 Draci Brno will represent the Czech extraliga when they start group play today in the European Champions Cup in Rotterdam. Brno earned the trip when it won the league last year.

Brno will take their formidable starting pitching staff, which includes Wesley Roemer, Radim Chroust and Michal Sobotka. Martin Schneider and John Hussey are solid out of the bullpen.

Eight teams in two groups will compete at the European Champions Cup. Draci Brno are in Group B. They play UnipolSai Bologna (ITA) on Wednesday at 10:30 a.m.; Curaçao Neptunus (NED) on Thursday at 7:30 p.m.; and T & A San Marino (SMR) on Friday at 1 p.m. The Semifinals will be on Saturday, with the Finals and placement games on Sunday.

Last week, Draci Brno, which is atop this year’s league standings with a 23-1 record, handled Technika Brno in two relatively close games. Technika, despite the solid outings, slipped into last place.

On Thursday, the Draci had to come back to win, 3-1. Joe Rivera went eight innings for Technika, giving up eight hits and only one earned run. He is 1-8 with an ERA of 1.29. His four strikeouts have him third in the league with 74.

On Friday, Draci Brno got only five hits, but they were able to score runs early and hold on for a 6-1 victory. Technika pitcher August Gallardo, who allowed two hits in the 1-0 Baseball Cup semifinal loss to the Draci on May 20, walked six and gave up all six earned runs in five innings. He did, however, get 11 of his 15 outs by strikeout. The Draci got work for their pitchers in advance of the European Club Tournmanet: Radim Chroust, John Hussey, Petr Minařík, Martin Schneider and Michal Sobotka allowed just two hits in nine innings.

Cardion Hroši Brno (15-7) went to Prague on Saturday hoping to move into third place in the standings. But, after splitting a doubleheader at Kotlářka Praha — 1-4 in Game 1 and 12-0 in Game 2 — the Hroši are still in fourth place, a game behind Kotlářka and a half-game up from fifth-place Eagles Praha.

For the second Saturday in a row, a Brno team was relegated from a top Czech football league.

On April 26, FC Zbrojovka Brno finished last in the HET Liga and will play in the Forunta narodni liga next season. Last Saturday, it was Lokomotiva Brno Horni Herspice who lost, 1-2, to visiting FC Hradec Králové: they needed a win to stay in the top women’s football league for a second season; now they are back in the second league.

Hradec scored quickly, getting a lead in the fifth minute. Nevertheless, Lokomotiva mostly maintained control of the ball. Unfortunately, they were unable to put together a decent scoring opportunity and went into the halftime down, 0-1.

After the break, Lokomotiva took the field with vigor and quickly found its footing. Their aggressiveness led to several corner kicks. One, in the 48th minute, tied the game after a desperate struggle for the ball that bounced off several players of both teams until Denisa Haklová slotted it into the goal.

Brno had several additional scoring opportunities — a long-distance shot that missed just high and another that bounced off the cross bar — but it was unable to add another tally. In the 80th minute, Hradec scored a counter-punch goal that took the wind out Brno’s sails. A Hradec player was given her second yellow card and ejected from the game in the 83rd minute but it was too late for Brno to take advantage of the opportunity.

Lokomotiva had finished just shy of making the Play Off Bracket after the regular season. Then, like Zbrojovka, the team went into a terrible stretch of terrible outcomes. Lokomotiva started the Play Out Bracket as the leader with 12 points; they went 0-1-5 in six games and finished last with 13 points for the season.

FC Hradec Králové was 2-2-2 in the Play Out Bracket. They would have been relegated had Lokomotiva won; instead it will stay in the top league for another season after having amassed 17 points.

Sígrs, Alligators Both Struggle at Home

The Brno Sígrs (3-4) lost to the visiting Prague Lions (7-1), 7-28, on Saturday. Michael Lindsey scored the touchdown for the Sígrs: a 100 yard kick-off return with 48 seconds left in the first quarter. All of the points in the game were scored in the first half, meaning the Sígrs were able to shut down the highest-scoring offense in the league for a significant amount of game time.

The Brno Alligators (2-5) had a bit more offensive output, but their defense also gave up more points as visiting Aquaponik Ostrava Steelers (5-3) pulled away for a 15-48 victory.

Both Brno teams play on the road this Sunday at 3 p.m.: The Alligators are at Pardubice Stallions and the Sígrs will play at the undefeated Prague Black Panthers.

The regular season ends at the end of June. Only the top four teams will advanced into the playoffs. Right now, with three games left, the Sígrs are in fourth and the Alligators are tied with Pardubice in fifth place.

On Sunday, June 17, the Brno teams will meet for the second time this year for a game that will start at 4 p.m.