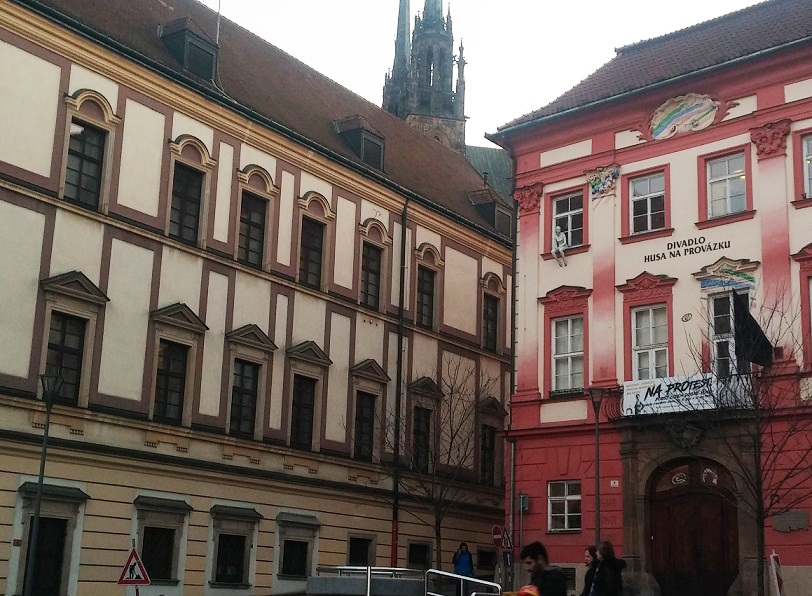 Brno, May 28 (BD) – On Saturday night, the activists managed to interrupt the production of “Our Violence and Your Violence” (Naše násilí a vaše násilí) at Goose on the String Theatre in Zelný trh, Czech online news website Novinky.cz reported.

In this controversial play, the character of Jesus rapes a Muslim woman. Shortly after the performance began, about 25 members of “Fair People” got on the stage and formed a chain in front of the actors in an attempt to push them off the stage and prevent them from continuing the production.

The activists began singing and making noise, while the audience in the auditorium began to support the actors, who continued to perform, by clapping and chanting: “Fair People, home!”

The actors struggled briefly and unsuccessfully to continue performing, and attempts at dialogue failed, Novinky.cz reported.

Shortly before 8pm, a police anti-conflict team arrived at the theatre, and the activists left the show after coming to an agreement with police.

“Our Violence and Your Violence” was being featured as part of the festival “Theatre World Brno”. From the outset, however, the play has been criticised by representatives of the Catholic Church and some politicians, local news website Brněnská drbna reported on Saturday.

First Deputy Mayor Petr Hladík, for example, sent an open letter to festival director and head of the National Theatre Brno Martin Glaser, asking him to reconsider the staging of the play and substitute it with another play.

The main theme of this year’s “Theatre World Brno” festival is “SVOBODA?!” (“Freedom?!”).

City representatives, after a long period of discussion, decided not to interfere with the festival program and let the play be staged.

“Slušní lidé” has been included on a list of neo-Nazi extremist groups by the Czech Ministry of the Interior. In the past, they received public attention when they covered the pink tank in front of the Red Church with a green tarpaulin, and when they displayed naked photos of Matěj Hollan, then Brno’s Deputy for Transport, along with his phone number, in the streets of Brno.

https://brnodaily.com/2018/05/28/breaking-news/extremist-group-interrupts-controversial-play-on-saturday/https://brnodaily.com/wp-content/uploads/2018/05/husa-na-provazku-ps.jpghttps://brnodaily.com/wp-content/uploads/2018/05/husa-na-provazku-ps-150x110.jpg2018-05-28T08:09:51+02:00BD StaffArt & CultureNews - ArchivedPoliticsBrno,Crime,Culture,News,SecurityAbout 30 members of the right-wing extremist group “Fair People” (“Slušní lidé”) interrupted a controversial play in central Brno this weekend. Photo: Goose on the String Theatre // Credit: @BrnoDailyBrno, May 28 (BD) - On Saturday night, the activists managed to interrupt the production of “Our Violence and Your Violence”...BD StaffBD Staff team@brnodaily.czAdministratorBrno Daily - English News and Events in Brno.Brno Daily

« 30/5 Velvet Comedy Presents: The Good, The Bad & The Irish
Numbeo: Brno has highest quality of life in Czech Republic »