Home » Family and Kids » Sport » You are reading » 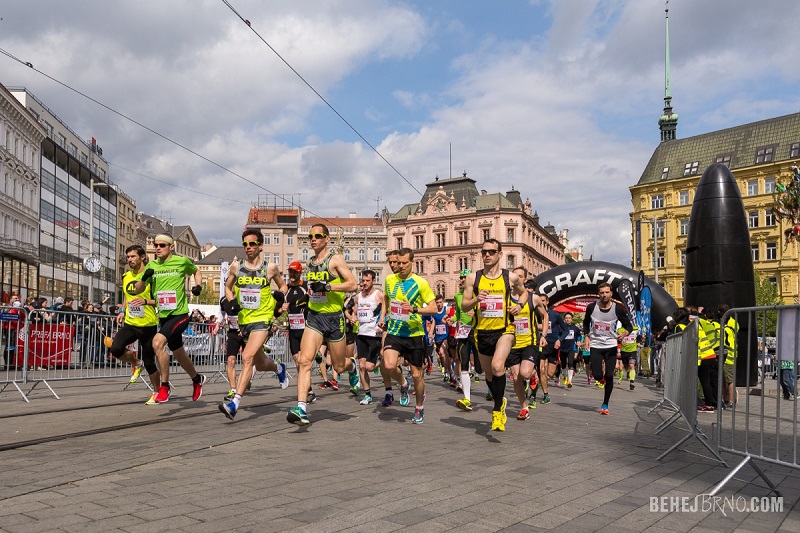 More than 1,600 people will run the streets of Brno Sunday. Photo credit: BehejBrno.com

Brno, Apr 17 (BD) – Like other urban areas around the world, the City of Brno will show itself off by opening its central streets to tired and sweaty long-distance runners: the sixth annual Brno Half Marathon will be run this Sunday.

“It is the only half marathon or any kind of a road race in Brno,” said Tereza Čtvrtníčková of BehejBrno.com.

More than 1,600 runners in all categories, including children and relays, have signed up to run on Sunday. The main start for the 10 km and half marathon is at 11 a.m.

This year, the start and finish has been moved from Náměstí Svobody up Rašínova Street to the area in front of St. Jakub’s Church.

Otherwise, the course is the same as in years past, taking the runners through Náměstí Svobody, down Masarykova Street, along Nové Sady, around DRFG Arena, along the Svratka river, through the Veledrome (where the relay exchanges are), around the Brno Fair Grounds, back to the Svratka river, around DRFG Arena, along Novy Sady, up Masarykova and through Náměstí Svobody to the finish. The 10 km race is one loop, the half marathon is two.

Despite the fact that the race is on Sunday, there are some places along the route where traffic may be affected by the loss of a lane. Few tram lines that will be affected, although expect some delays.

The weather is expected to be mostly sunny and around 22°C, creating a potential obstacle for runners. In the past, several have needed medical assistance because of the heat. 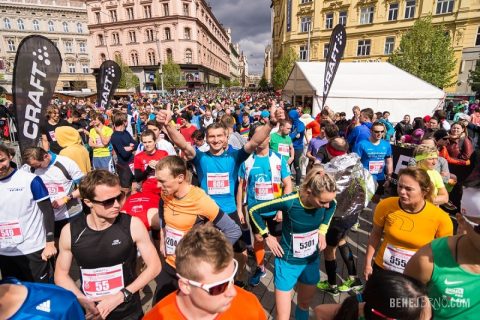 Jiří Čípa, who won the Bratislava Marathon on April 8, is expected to be the favorite in the half marathon. He won the race last year in 01:09:02. Many other top Brnoan runners will also be in the race, including Daniel Orálek, the local distance-running legend who has run countless kilometers through these streets and around the world.

On the women’s side, look for Lenka Kohnová. She is one of the top half marathon women runners in the Czech Republic.

There are many places to watch the race as a spectator. Náměstí Svobody and Masarkyova will both be festive. Every year there is a regular group of younger people who set up in front of the Faculty of Education near the Svratka; the beer that they drink and their enthusiastic cheers offer motivation for runners to finish the race for their own refreshment.

“The velodrome is a good place” to watch the race, Čtvrtníčková said. “There will be a live band who will play there. There will be loads of people who will go through there.”

Given the fact that running races have become targets for terrorism, including a thwarted attack at the Berlin Half Marathon two weeks ago and the bombing at the Boston Marathon five years ago, security is a high priority.

“The police are prepared for the event,” Čtvrtníčková said. “They are participating every year and working with us. Also the emergency services. We are in contact with everyone and everything is coordinated.”

https://brnodaily.com/2018/04/17/family-and-kids/brno-runs-sunday-half-marathon/https://brnodaily.com/wp-content/uploads/2018/04/Brnensky_pulmaraton_2017-2.jpghttps://brnodaily.com/wp-content/uploads/2018/04/Brnensky_pulmaraton_2017-2-150x100.jpg2018-04-17T08:40:24+02:00Bruno ZalubilFamily and KidsSportBreaking News,Brno,Brno Urban Guide,Culture,Czech Republic,Sport,Things To Do in BrnoMore than 1,600 people will run the streets of Brno Sunday. Photo credit: BehejBrno.comBrno, Apr 17 (BD) – Like other urban areas around the world, the City of Brno will show itself off by opening its central streets to tired and sweaty long-distance runners: the sixth annual Brno Half...Bruno ZalubilBruno Zalubilbzalubil@hotmail.comAuthorA connoisseur of the unpredictable and unscripted drama of sports.Brno Daily