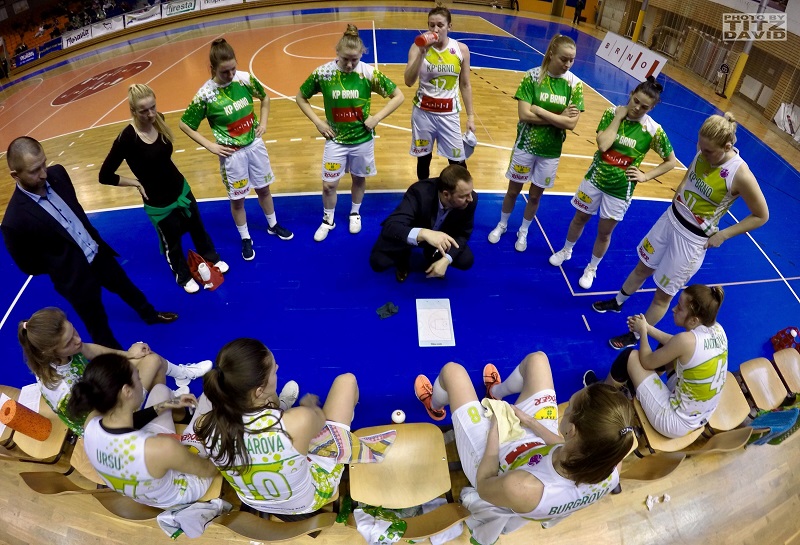 KP Brno returns to Královo Pole for Game 4 of their semifinal series on Saturday at 3 p.m. Photo credit: KP Brno

After splitting the first two games, KP Brno will play at DSK Basketball Nymburk tonight (Wednesday) as they try to take control of the ZBL semifinal series.

The series will return to Sportovní hala Vodova in Královo Pole for Game 4 at 3 p.m. on Saturday. Game 5, if necessary, is scheduled for Monday back in Nymburk.

ZVVZ USK Praha, which was 22-0 in the regular season, is waiting to play the winner in the Finals.

KP Brno, which has already won the Czech Cup this year, has been on quite a roll. It is 15-2 in its last 17 games. Both losses were in postseason home games: Game 1 to Žabiny Brno in the quarterfinals and their most recent game on Saturday against Nymburk, 73-75, on Saturday.

Technic Brno, which is playing in the Play Out bracket, won its first game in more than half a year when it beat SBŠ Ostrava, 64-55, on April 4. The confidence boost may be the key to staving off relegation.

HC Kometa needed just five games to advance into the Finals of the Tipsport extraliga, downing Plzeň four games to one with memorable goals and solid defensive play. Now they will try to defend their title in a best of seven series with Oceláři Třinec.

The first two games are in Třinec: Game 1 is Saturday at 6:20 p.m. and Game 2 is Sunday at 4 p.m. Then the series returns to DRFG Arena with games on Wednesday at 5:20 p.m. and Thursday at 5 p.m. All of the games will be shown on a large screen in Zelny trh.

The semifinal series against Plzeň was dramatic. Kometa won the first three games, lost Game 4 at home, then won Game 5 in Plzeň.

Game 3 was an exceptionally dramatic game. It seemed destined for extra time until Martin Erat got a pass near the middle of the rink with just less than a minute left in the home game. He was able to gain control of the puck, poke it ahead between two defenders, circle around the outside, gain control his own pass, and put a backhanded shot between the legs of the Plzeň goaltender. Brno 3, Plzeň 2.

Erat added two more goals early in Game 5 as Brno pulled away to a 2-6 victory.

Martin Nečas, the 19-year-old who was drafted into the NHL last year, also had several nice goals.

Brno, which swept HC Vítkovice Ridera in the quarterfinals, is now 8-1 in nine postseason games. Last year, Brno went 12-2 in the postseason and won its 12th title.

“Football players make football plays.” — It is an old saying that, on the face of it, means nothing, but in reality describes how the best players always seem to be in the right place at the right time.

Last Sunday, Jan Nestr, the offensive MVP of the 2017 Brno Alligators, picked up a last-second blocked kick and ran it back for the winning touchdown of a 13-19 Alligators victory over crosstown rival Brno Sigrs in the first game of the 2018 season.

“It was a huge surprise for us,” said Alligators veteran quarterback Tomáš Fortelný, who scored on a 2-yard run in the second quarter. “We knew that we had to keep going and keep pushing but we didn’t expect an ending like this.”

“It is very disappointing for us,” said Sigrs head coach Petr Švanda. “We were really confident and we really believed that we could win this game.”

Both teams have a break this weekend. On April 21, the Alligators host the Prague Black Panthers at 2 p.m. and on April 22, the Brno Sígrs host Aquaponik Ostrava Steelers at 2 p.m.

It took a while for the teams to rid themselves of their first-game rust, combining for two fumbles, two interceptions and two punts in the first six possessions.

Early in the second quarter, Sigrs quarterback Filip Ondrášek broke several tackles to score on a 31-yard run. A couple drives later, the Alligators responded with a lengthy drive capped by Fortelný’s touchdown.

In the second half, the Sigrs began to use the speed of its three American players — Michael Lindsey, Anthony Cesar and Tyrone Clark — out of the offensive backfield to move the ball effectively against the tired Alligators defenders. It worked: Lindsey scored on an 11-yard run with 6:30 left in the game and the Sigrs took the lead, 13-10.

Less than two minutes later, the Alligators tied the score at 13 when Nestr, who also kicks, completed a 37-yard field goal, his second of the game.

With one second left on the clock, the low trajectory of the Sigrs field goal attempt resulted in a loose ball. Nestr picked it up and ran 72 yards for the winning score.

“We can expect a good rematch,” Švanda said.

Circle June 17 on your calendar. It will be another chapter in an exciting rivalry.

Though it was not unexpected that second-place SK Slavia Praha would beat host FC Zbrojovka Brno on Saturday, the 0-1 loss was yet another step closer to the possibility of the top football team in the City of Brno finishing the season in one of the final two spots in the HET liga standings and being relegated to the second league.

When last-place FC Banik Ostrava went to Zlin last week and won, 0-2, the bottom of the standings came closer. Ostrava has 19 points. Zbrojovka has 20.

Fortunately, there next six teams in the stands are within five points and three that Zbrojovka has left on the schedule — FC Vysočina Jihlava (23 points), FK Dukla Praha (23) and 1.FC Slovácko (21) — are within one victory.

This week, Zbrojovka travels to Uherske Hradiste to play 1.FC Slovácko, who had a scoreless tie at MFK Karviná last week. The Moravian Derby between Zbrojovka and Slovácko starts at 5 p.m.

Zbrojovka has a tough road ahead in the final six games of the season. They host league-leading Viktoria Plzeň for a Saturday night game April 21 (the game starts at 8:15 p.m.); travel to Dukla Praha for a Friday evening game on April 27 (game time 6 p.m.); host Jablonec on May 5; travel to Teplice on May 12; host Jihlava on May 19; and finish the season at Baník Ostrava on May 26.

Finding some offensive output is mandatory: during the spring, Zbrojovka has scored only two goals in seven games.

mmcité+ Brno begins in the Play Out bracket today (Wednesday) when they travel to NH Ostrava. The team will return to Brno on Wednesday to host USK Praha. The time will be announced.

The Play Out Bracket includes the bottom four teams of the Kooperativa NBL. Brno has home and away games with each of the other teams. The last-place team will be forced to defend its right to play next season in the top league against the top two teams of the lower league.

Through the first two weeks of the season, Draci Brno have retained their normal place atop the Extralilga standings with four wins in four games.

Cardion Hroši Brno (2-2) attempted to upset the top team last Saturday when they got three runs in the sixth inning, but Draci pitcher Michal Sobotka was able to shut the door out of the bullpen, giving starter Ondřej Furko, who had pitched five innings of no-hit ball, the win. The final score was 7-4.

Technika Brno has lost all four of their games.

Lokomotiva Brno Horni Herspice will travel to FC Hradec Králové on Saturday for the final game of their season in the top women’s football league. The game starts at 11 a.m.

Brno (3-2-8, 11 points) was determined to have won, 0-3, at FC Viktoria Plzeň on March 17. The 11 points moved them to fifth in the eight-team league. Given the result, Brno is guaranteed to stay in the top women’s football league next year.

Hradec Králové, which is in last place, has a record of 2-2-9 with eight points.