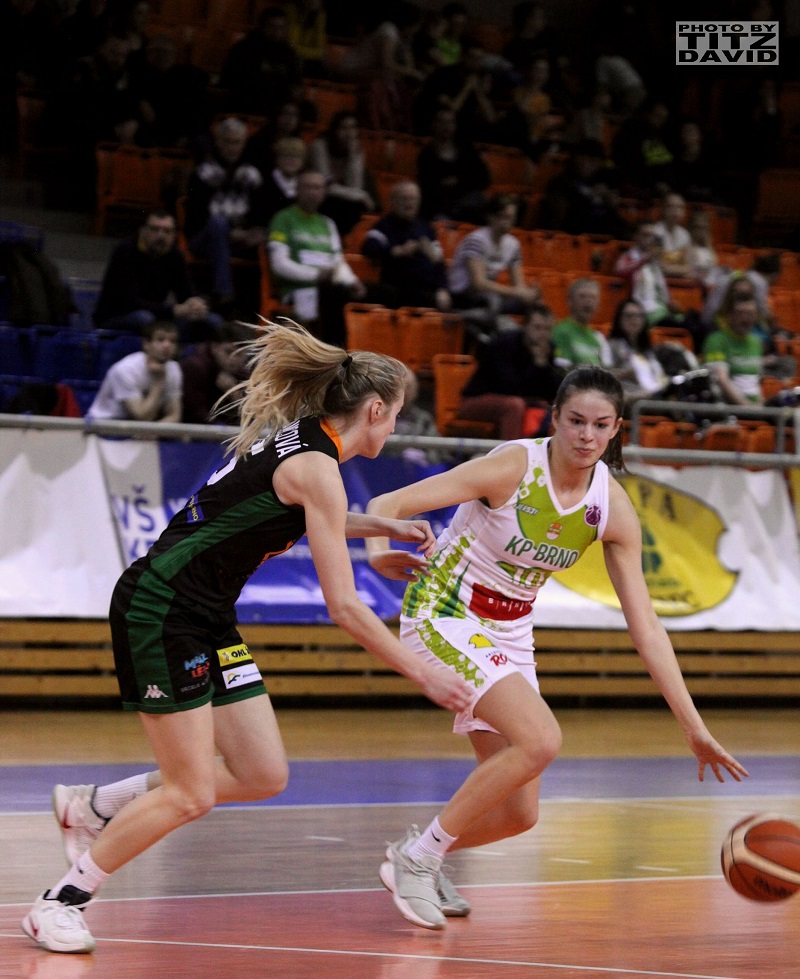 Brno, March 28 (BD) — Regular-season-leading Plzeň up next for defending-champion Kometa Brno; Zbrojovka hosts Karvina in struggle to get out of the relegation zone; mmcité+ Brno continues fighting in Group A2; and the Brno sports schedule.

KP Brno withstood a second-half surge to beat Žabiny Brno on Tuesday to take a 2-1 lead in the competitive and exciting ZBL quarterfinal series.

Game 4 will be played on Thursday in Žabovřesky. The game starts at 5 p.m.

“It will be the same kind of basketball,” said KP Brno head coach David Zdeněk after Game 3 (translated from Czech). “Every player will give it their all in their own physical and mental styles. Nobody will give anything away for free. It is a true rivalry and it is in the playoffs.”

Žabiny Brno hope to force a Game 5 on Saturday. KP Brno wants to finish the series and advance to play DSK Basketball Nymburk, which swept Slovanka MB, in the semifinals.

On Tuesday, KP Brno jumped out to an early lead and maintained it to win Game 3, 74-64. Edita Šujanová led the way with a solid shooting performance, going 3-for-4 from 2-point range and hitting all three of her 3-point attempts. She led the game with 16 points.

“We certainly want to make this more dramatic and extend the series into Easter (weekend),” said Beáta Adamcová, who had 12 points for Žabiny Brno in Game 3. “This time we did not lose physically, which will be important for the next match.”

In Game 2, KP Brno found itself trailing through the first half and into the second. In the fourth quarter, they went on a run, blowing the game — which was 43-43 after 30 minutes of play — wide open to post a deceivingly large spread of victory, 53-72.

Žabiny Brno grabbed hold of Game 1 in the final minute and pulled away to a 53-61 victory.

After 13 days of rest, Brno Kometa will finally take to the ice on Saturday to face HC Škoda Plzeň in a best-of-seven semifinal series of the Tipsport extraliga.

The first two games of the series are in Plzeň on Saturday and Sunday. Brno will host Game 3 next Wednesday at 7 p.m. and Game 4 on Thursday at 5 p.m. DRFG Arena will be packed and all of the games will be on television.

Plzeň dominated the regular season with 107 points, eight more than second-place Mountfield HK, and beat HC Olomouc in the quarterfinals, four games to one.

Brno, the defending champions, swept HC Vítkovice Ridera in the quarterfinals. Including their run through the postseason last year, Kometa is 16-2 in their past 18 postseason games.

Zbrojovka is currently sitting in 15th place of the 16-team HET Liga standings. That means, they are in the relegation zone and, if they don’t start winning games, they will suffer the ignominious fate of dropping into the lower league.

On Saturday, Zbrojovka has a strong change to right the ship. They host Karviná, which is in ninth place, at 3 p.m.

Zbrojovka is 5-4-12 and 19 points through 21 games. Karviná is 6-5-10 with 23 points. There is still a lot of season left and the bottom half of the standings are bunched up with seven teams within four points of each other.

But there are strong teams in the near future. Second-place Slavia Praha, for example, comes to Brno on April 7 for a 1 p.m. start.

Every step forward, seems to lead to a step backward. It’s been that kind of a season for mmcité+ Brno.

Last Wednesday was a perfect example: a beautiful alley-oop slam by Kentwan Smith with two seconds left was negated by the opponent’s buzzer-beating, under-pressure, prayer of a 3-point shot and then, after the overtime period, another last-second shot that finished off the 75-76 NH Ostrava victory.

At least on Saturday, Brno took a step forward by beating Fio banka J. Hradec, 66-90. Dorde Lelić and Canyon Barry both led the team with 19 points.

mmcité+ Brno (9-20) is coming to the end of play in Group A2. They will move into the Play-Out Bracket in two weeks where they will play against four teams in home and away games. The last-place team will be forced to defend its right to play next season in the Kooperativa NBL against the top two teams of the lower league.