Unemployment rate in the Czech Republic continues to drop 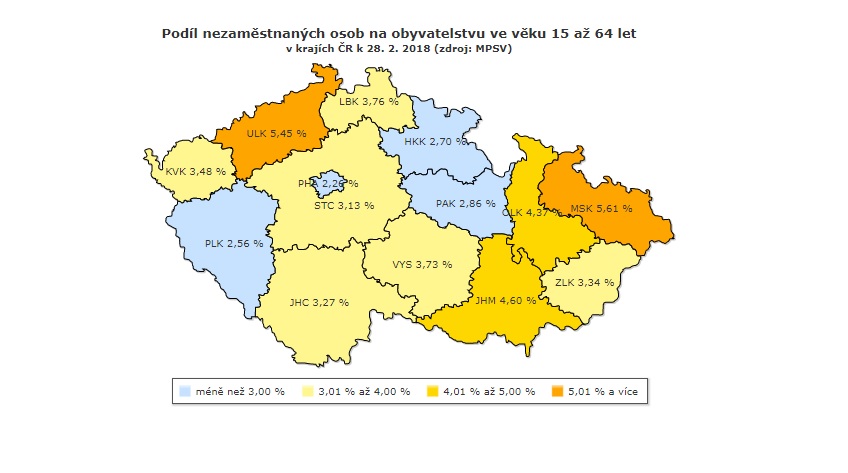 Good news for those who are currently seeking a job! Title graphic: Rate of unemployment by region as of February, 28 2018, Czech Statistical Office (ČSÚ).

As of February 28, 2018, South Moravia has registered an unemployment rate of 4.6% according to the latest data released by the Czech Statistical Office, which represents a drop of 0.2% from January (4.8%).

In winter months, the unemployment rate typically rises slightly due to a lack of seasonal work, for example in the construction sector. However, in January 2017, the number of unemployed in the South of Moravia was significantly higher than this year. Approximately 10,000 more people were jobless in South Moravia last January. Hence, it is true that unemployment in the region continues to be at record low levels. Read more: Number of unemployed and job vacancies up in January.

While the unemployment rate continues to drop, the Czech Republic currently remains the member state of the European Union with the lowest rate (2.4%) according to Eurostat, which cites the Czech Statistical Office’s methodology that uses a national household survey. Malta reports as the country with the second lowest rate (3.5%) and Germany follows with 3.6%.

Eurostat estimates that there were 17.931 million unemployed men and women in January 2018 in the European Union, and that 14.111 of them were in the euro area.

Czech unemployment, on the other hand, is following a downward trend compared to the previous year. In February 2017 the rate was 5.1%, but it fell to 3.7% for the same month in 2018 according to Trading Economics.

“The number of unemployed persons fell by 99.309 thousand people to a total of just 280.9 thousand. The jobless rate was 3.8 percent for men and 3.7 percent for women,” the data of Trading Economics show.

At the beginning of 2018, as can be seen in the graph, the unemployment rate was 3.9% and it is estimated that this figure will continue to drop or remain stable in the upcoming months.

https://brnodaily.com/2018/03/16/breaking-news/unemployment-rate-in-the-czech-republic-continues-to-drop/https://brnodaily.com/wp-content/uploads/2018/03/Unemployment-rate-in-the-Czech-Republic-continues-to-drop.jpghttps://brnodaily.com/wp-content/uploads/2018/03/Unemployment-rate-in-the-Czech-Republic-continues-to-drop-150x84.jpg2018-03-16T09:06:17+01:00BD StaffBusinessNews - ArchivedPoliticsBreaking News,Brno,Czech Republic,Employment,EUGood news for those who are currently seeking a job! Title graphic: Rate of unemployment by region as of February, 28 2018, Czech Statistical Office (ČSÚ).By Anastasia AlexandridouBrno, Mar 16 (BD) - The number of unemployed in the Czech Republic has decreased from January of 2018 (3.9%) to February...BD StaffBD Staff team@brnodaily.czAdministratorBrno Daily - English News and Events in Brno.Brno Daily