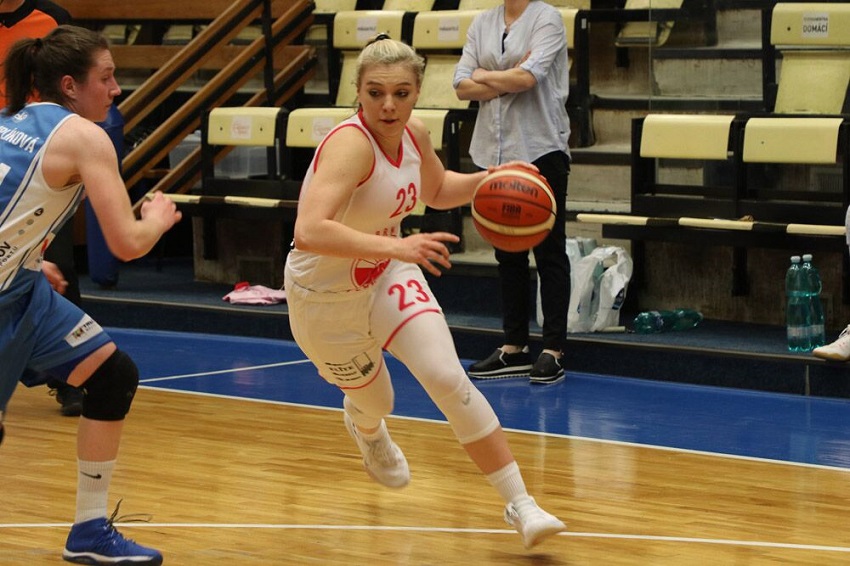 Technic Brno had 15 3-pointers as a team and 20 points from Tereza Zítková (above) in their last game. Their next opponent is Czech Cup winner KP Brno on Sunday at 5 p.m. Photo: Zeb Telfer

The Kralovo Pole Brno women’s basketball team has existed since 1960. It has been in the top league since 1962. On Sunday, they finally reached the absolute top: KP Brno won it first Czech Cup.

After getting past Žabiny Brno in the semifinals, KP Brno beat Sokol Nilfisk Hradec Králové, 72-69, on Sunday in Nymburk to take the top prize of the annual tournament.

“Hradec was an incredibly strong opponent, tenacious, and nothing was clear until the last minute,” said first-year KP Brno coach David Zdeněk. “It was an amazing final.”

The standout player was Edita Šujanová and she was named the Most Valuable Player of the tournament. The 33-year-old power forward totaled 24 points in the final.

“I can really appreciate the value of this first trophy from the domestic competitions for KP Brno,” Šujanová said. “And I think there’s still more in the future.”

In the semi-finals, KP Brno faced cross-town rival Žabiny Brno, winning handily, 38-71. It started as a competitive game, but, in the final seconds of the first quarter, Sarah Beránková hit a 3-pointer that turned a modest difference into a nine-point lead. When the second quarter started, Žabiny were not able to turn the tide as KP Brno pulled away with several unanswered points and never looked back. Overall, KP Brno had seven 3-pointers; Zabiny had none as they tried in vain to get back in the game.

Technic Brno did many things right in their Wednesday night 75-89 loss to visiting BK Lokomotiva Trutnov. They jumped out to an 11-0 lead. They hit six 3-pointers in the first quarter. They finished the first half on a 13-5 run. They made another six 3-pointers in the third quarter. And Kamila Selucka converted a four-point play to cut the deficit to two points after three quarters.

Unfortunately, during the fourth quarter, Technic Brno was not able to keep up their scoring and Trutnov took complete control of the paint, both scoring from close range and grabbing rebounds.

“We had a really good first half,” said forward Aneta Půlpánová, who had seven points. “We said in the locker room (at halftime) that we had to keep it going. But, we just couldn’t do it. We are afraid to win.”

Trutnov (5-14), a small mountain town located in the Krkonoše mountains, focused on moving the ball into the paint. They were only 2 of 11 from 3-point range.

“I think it’s in our heads,” Půlpánová said. “During practice we know what to do but we can’t do it during the game.”

Tereza Zítková was the leading scorer for Technic with 20 points. Hana Gašicová was 5-for-6 from 3-point range and totaled 17, both personal season bests.

Technic Brno next plays against crosstown KP Brno on Sunday. The game starts at 5 p.m.

Rafael Acosta, in his first game in home colors, scored in the 29th minute to give Brno the lead and, eventually, the 1-0 victory over second-place Olomouc on Saturday.

The Uruguayan striker got a pass from Ladislav Krejčí in the middle of the penalty box and tapped it into the left corner of the goal.

This Sunday, Zbrojovka travels to Prague to play Sparta. The game starts at 6 p.m.

Sparta is always a big game. New-addition 24-year-old Konstantin Bazeljuk, a Russian striker from Moscow, is still questionable. He is not being rushed into the lineup with the belief that he will be more important to the team later in the season when he is at 100 percent.

Since Roman Pivarník arrived as the coach, Zbrojovka has four wins, three loses, and a tie. Two of the three losses were by one goal; the other was at league-leading Viktoria Plzeň.

Zbrojovka is now in 12th place of the 16-team league with 18 total points.

mmcité+ Brno Uses Cup Win to Prepare for Group A2

mmcité+ Brno begins play tonight in Group A2 of the Kooperative NBL when they face NH Ostrava at 5:30 p.m. Brno then returns home on Saturday to host Fio banka J. Hradec on Saturday.

mmcité+ Brno got a momentum boost when they beat an undermanned KK Helios Suns Domzale, 78-40, on Saturday to advance in the Alpe Adria Cup.

Brno (6-16) will play home and away games with SLUNETA Ústí nad Labem (11-11), BC GEOSAN Kolín (10-12), USK Praha (9-13), NH Ostrava (6-16) and Fio banka Jindřichův Hradec (1-21) as part of Group A2. In early April, two teams from Group A2 will rejoin the top half of the league for the Play-Offs. The bottom four teams will move into the Play-Out Bracket; the last-place team from the Play-Out Bracket will play the top two teams of the lower league to retain the right to stay in the Kooperativa NBL next season.

Now that the Winter Olympics have concluded, three games remain in the regular season of the Tipsport extraliga for Brno, starting with league-leader Plzeň tonight at DRFG Arena at 6 p.m.

On Friday it is off to Olomouc for a 5:20 p.m. start and the regular season ends with Litvínov in town for a 4:20 p.m. start on Sunday.

Kometa, the defending champions, are guaranteed to advance into the postseason. The playoff schedule will be announced.

Facebook Comments
https://brnodaily.com/2018/02/28/sport/brno-sports-weekly-report-kp-brno-wins-first-czech-title/https://brnodaily.com/wp-content/uploads/2018/02/Bruno-Zalubil-Sports-Report.jpghttps://brnodaily.com/wp-content/uploads/2018/02/Bruno-Zalubil-Sports-Report-150x100.jpg2018-02-28T10:33:12+01:00Bruno ZalubilSportBrno,Czech Republic,Events in Brno,Sport,Things To Do in BrnoTechnic Brno had 15 3-pointers as a team and 20 points from Tereza Zítková (above) in their last game. Their next opponent is Czech Cup winner KP Brno on Sunday at 5 p.m. Photo: Zeb Telfer Brno, February 28 (BD) – Big win propels Zbrojovka into match at Sparta; mmcité+ Brno starts play in...Bruno ZalubilBruno Zalubilbzalubil@hotmail.comAuthorA connoisseur of the unpredictable and unscripted drama of sports.Brno Daily

A connoisseur of the unpredictable and unscripted drama of sports.
View all posts by Bruno Zalubil →
« Strong frosts create demand for homeless shelters
Video: Cosples 2018 – Cosplay in Brno (What’s Up Brno #7) »