Home » News - Archived » Politics » Relocation to Brno » You are reading » 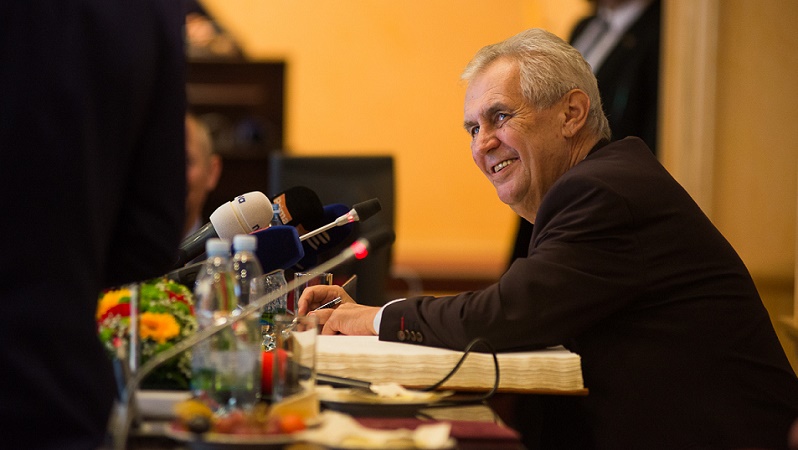 NYT writes that the second round will show whether the Czech Republic will be drawn to the East or fully return to the EU embrace. Photo: Hrad.cz

Vienna/New York, Jan 15 (CTK) – Incumbent Czech President Milos Zeman has a bigger reason for fears than it seemed that he will not defend his post in the second round of the election, the Austrian dailies Die Presse and Der Standard write today.

“If Mr. Zeman wins, it is likely to affect how the Czech Republic positions itself in uncertain times for the European Union,” NYT writes.

Die Presse writes there are many signs indicating that Zeman’s rival Jiri Drahos, who also advanced to the second round, is standing a better chance of winning than originally expected.

The self-confident head of state is in a difficult position and it is aware of this, it adds.

Zeman “knows his folk,” also knowing that Czechs tend to be mustered behind the candidate who lost the first round.

“The odds of both contenders are fifty-fifty,” Die Presse writes.

Drahos has the advantage that a number of successful candidates from the first round have backed him. Drahos, an independent chemical engineer, was inspired by Slovak President Andrej Kiska who put up a successful fight with Prime Minister Robert Fico, an experienced politician, a few years ago.

Die Presse writes that Zeman’s chances are also diminished by many Czechs disliking his proclivity for provocations and alcohol as well as the fact that “he has repeatedly decorated the favourite figures of the former Communist regime, including collaborators of its secret police.”

Many Czechs are afraid that if still headed by Zeman, their country might be pushed even more to the East, Die Presse writes.

The surprising criticism of Zeman’s foreign policy by Prime Minister Andrej Babis (ANO) and his recommendation that he should distance himself from some of his aides was a “cold shower” for Zeman, it adds.

“These unexpected statements show that Babis can imagine a victory of Drahos with whom he would have to cooperate,” Die Presse writes.

However, “very experienced Zeman” may have the advantage before the second round in the participation in the debates with Drahos “whose eloquence lags behind.”

Zeman may exploit a weakness of the former head of the Czech Academy of Sciences, his having signed an appeal to accept war refugees.

“If Zeman uses this card, which can be presumed, the balance may eventually tilt in his favour,” Die Presse writes.

Der Standard writes that Zeman, labelled by his opponents a symbol “of ossified power structures, a radicalised rhetoric and a conspicuous, big shift to Russia and China,” now must leave his reserved position and start an active political fight with Drahos.

On Saturday evening at the latest, the presidential election in the Czech Republic became a “referendum on Zeman,” Der Standard writes.

NYT writes that the second round will show whether the Czech Republic will be drawn to the East towards Russia and China or whether it will fully return to the EU embrace.

“But even Mr. Zeman’s critics say he is smart, well read and one of the most effective public speakers in the country. And the more his comments outrage the intellectual class, the more his core supporters seem drawn to him,” NYT writes.

“For many, however, his language is not just offensive, but is also opening the door to fringe groups that until recently had dwelled on the margins of Czech political life, including the SPD [Freedom and Direct Democracy], a neo-fascist group that has called for banning Islam,” it adds.

NYT also says “The relationship between Mr. Zeman and Mr. Babis — always one of convenience — seemed to be shifting after the first round of voting. Mr. Babis endorsed Mr. Zeman, but in what seemed like a clear attempt to hedge his bets, he offered a strong critique of his political patron.”

https://brnodaily.com/2018/01/15/breaking-news/zeman-facing-problems-with-re-election-foreign-press/https://brnodaily.com/wp-content/uploads/2017/11/zeman-hrad-cz.jpghttps://brnodaily.com/wp-content/uploads/2017/11/zeman-hrad-cz-150x85.jpg2018-01-15T14:12:10+01:00PTVTeamNews - ArchivedPoliticsRelocation to BrnoBreaking News,Brno,Czech Republic,EU,PoliticsNYT writes that the second round will show whether the Czech Republic will be drawn to the East or fully return to the EU embrace. Photo: Hrad.czVienna/New York, Jan 15 (CTK) - Incumbent Czech President Milos Zeman has a bigger reason for fears than it seemed that he will...PTVTeamPTV Teaminfo@ptvmedia.czUm_memberBrno Daily