Czech parties not to support Babis’s govt in confidence vote

Prague, Jan 10 (CTK) – All the other eight parties in parliament confirmed that they will not support ANO’s minority cabinet in a confidence vote because Prime Minister Andrej Babis should have tried to form a majority government, their leaders said today.

Civic Democrat (ODS) leader Petr Fiala told journalists that Babis did not try to form a majority government with support from the Chamber of Deputies and he formed a government of ANO that won under 30 percent of the vote in the autumn general election.

Christian Democrat (KDU-CSL) chairman Pavel Belobradek shared this view. “The prime minister did not negotiate about a majority government because he does not want it,” Belobradek said.

“The only thing one can hear from Andrej Babis is that we should support his minority government so that Babis and his ministers from the ANO movement could distribute billions of crowns from public funds for their own personal and party interests,” Okamura said.

“No serious negotiations about the forming of the next government were held. It was in fact a dictate of ANO and Andrej Babis how to form the government, both in its lineup and policy statement,” Chovanec said.

The lower house session that is to take a confidence vote in ANO’s minority government opened this morning. None of the other parties in parliament promised to support it.

Belobradek said he considers the formation of a minority government that does not have secured sufficient support from the lower house of parliament to be a failure in management of which Babis and President Milos Zeman, who backed Babis’s plan, are to blame.

The Czech Republic needs to have a majority government to be politically and economically stable, Belobradek said.

Fiala said Babis and Zeman try to create the impression that the confidence vote is a formal step and a non-binding test of support. “But it is a crucial decision, no government can function and rule the country with support from parliament,” he said.

Zeman said last year already that he would entrust Babis with a second attempt to form a government if his first attempt fails.

The other right-wing party, TOP 09, criticised this, too.

Stanjura said the rest of the government’s programme shows that Babis wants to rule by himself and he does not care with whom. “The programme includes points that suit the Communists (KSCM) and the CSSD, while some other points are from the ODS programme, he said.

He said the policy statement is vague and it does not insist on cutting taxes and curbing red tape.

The Pirates also expressed reservations about the policy statement, mainly criticising it for omitting the introduction of particular anti-corruption measures. 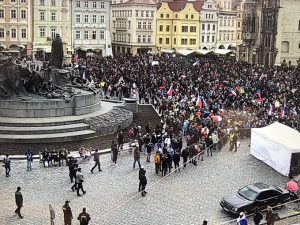