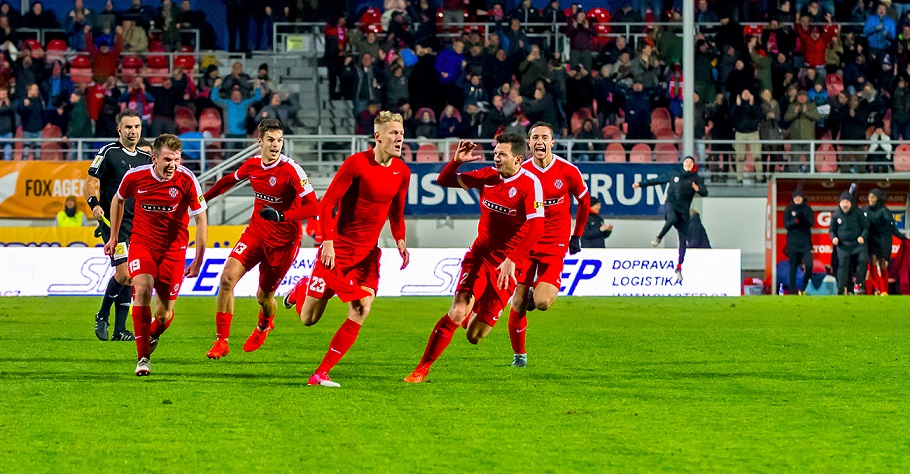 Michal Škoda came off the bench in the 86th minute of a scoreless FC Zbrojovka Brno game against FK Teplice on Saturday. Moments later in the 87th minute, he had put Brno on the scoreboard and pulled the team out of last place in the HET Liga standings.

It may prove to be the most important goal of the season, particularly because it was while Brno was playing man down.

Victories over Jihlava and Zlin would go a long way to easing the stress of a season that has seen two head coaching changes.

Škoda replaced Tomas Pilík. His left-footed shot, on his first touch, was highlight ready. He got the ball in the right corner of the goal box, settled it, then blasted it into the goal. He tore off his uniform top as he sparked off the emotional on- and off-field celebrations. The referee gave him a yellow card after, for some strange reason, a congratulatory handshake.

Škoda has battled for playing time this year and, in the previous 13 games, he had scored only two goals. Now that he has three goals, he has provided a third of Zbrojovka’s goals this season.

Martin Zikl, an impressive 18-year-old, made his Zbrojovka debut at the 60-minute mark, bringing a sense of excitement to the crowd. He had some solid touches.

Brno was playing a man down because Francis Koné got two inexplicable yellow cards — one for kicking the ball off the field after a referee whistle and, minutes later, for pushing an opposing player to the ground during another stoppage of play. He was ejected in the 40th minute.

They have only won three of the past 12 league games.

Despite their recent slump, however, Kometa is fourth in the Tipsport extraliga standings with 41 points. Plzeň is at the top with 51, then Hradec Králové (46) and Třinec (45).

Kometa will continue their grueling schedule with a game at Olomouc on Friday at 6 p.m. Then, Litvínov comes to Brno on Sunday at 5 p.m. and Oceláři Třinec arrive on Wednesday at 6 p.m.

In addition, the Hockey Champions League continues in December with two quarterfinal games against JYP Jyväskylä. Kometa starts at JYP Jyväskylä on Dec. 5 at 6 p.m. then hosts the Finnish team on Dec. 12 with a 5:30 p.m. start.

Brian Sullivan had an outstanding offensive night but it was not enough as mmcité+ Brno lost to visiting BK Opava, 75-85, last Saturday.

The problem? The same problem as in several games earlier this season: Brno fell behind early.

“The story is the same,” Brno head coach Dejan Jakara said, referring to losses against Svitavy and Děčín. “We started the game poorly, we were down by 16 points, we lost too much energy and at the end the players were breathing heavily.”

Jana Hausknechtová led Basket Žabiny Brno to victory over SBŠ Ostrava, 75-58, with a lights-out performance on Saturday. She was 8-for-15 from the field with four 3-pointers. Her 27 points was double her season average. Significantly, starting point guard Tea Buzov left the game with an injury.

Technic Brno had their hands full against DSK Basketball Nymburk and lost, 41-85.

Žabiny Brno go on the road to play in two Central Europe Women’s League games in Romania: they played Olimpia CSU (Romania) on Tuesday and they play at CSU Alba Iulia on Thursday.

KP Brno continues their EuroCup schedule with home games against Fribourg tonight and Venezia next Wednesday.

« RegioJet adopts budget for more trains, fewer buses
The Melting Pot of America Reaches All the Way to Brno »