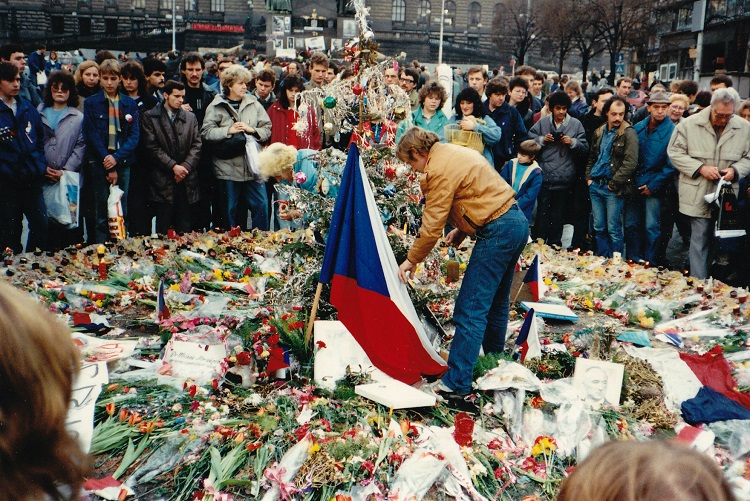 The Velvet Revolution was a non-violent transition of power in what was then Czechoslovakia. Photo: By Marc Dragul [CC BY-SA 3.0], via Wikimedia Commons

Brno, Nov 13 (BD) – Oftentimes, during the normal hustle and bustle of life, people note that they soon get a day off, look forward to sleeping in, and completely fail to comprehend why they get to enjoy the extra snooze.

This Friday is just such a day. Don’t snooze without knowing why you can.

This Friday recognizes the Velvet Revolution and the incredible changes that came upon this country only 28 years ago. Without the cascade of events that began on Nov. 17, 1989 — and fit into the larger tableau of change that swept across Europe — there may not be an English-language newspaper to inform the large ex-patriot community of Brno.

In Brno, the Philosophical Faculty MU student foundation will have their traditional lampion procession through the city to commemorate the Velvet Revolution.

The candle-light parade will begin on Namesti Svobody at 6 p.m. and make several stops, including at the Faculty of Philosophy, the Faculty of Civil Engineering of VUT, and the Faculty of Law. Two final stops will be at Kaunicovy koleje and Kraví hora. Each stop will commemorate the victims of Nazism and Communism in 1939 and 1989, respectively. Lampions will be available for purchase or you can bring your own. This event is child friendly.

Most of the actual historic events connected to the Velvet Revolution occurred in Prague.

The Cold War was thawing. The Berlin Wall had fallen days earlier. An electric current was spreading throughout Europe. Small events grew in stature and led to bigger events, with each step growing in significance and creating a momentum that overwhelmed the existing power structure such that it was willing to non-violently step aside.

On Nov. 17, 1989, a student group was granted a permission to commemorate the 50th anniversary of the violent suppression of a student demonstration on International Students’ Day in 1939 by the Nazis. Permits to march in Communist Czechoslovakia were not easy to come by; marching to condemn fascism was in line with Communist ideology. However, the march was denied access to the center of the city.

Yet, the prevailing winds of change added a new element and, when the group decided to go towards Wenceslas Square, they were met by Communist riot police at Narodní Třida. Fifty years after the Nazi crack down another student demonstration was forcibly suppressed. News spread around the country, rumors sprouted, and cries for change grew in volume.

A two-hour general strike was held on Nov. 27. Two days later, the constitution was rewritten to officially end the one-party dominance of the Communists in Czechoslovakia.

Within two months, Vaclav Havel, who had spent years in prison as a political dissident, was made the first president of the newly created parliamentary republic.

The next time you visit Prague, make sure to remember this history. Stand at the top of Wenceslas Square and image a half million people jingling their keys as if waking from a bad dream. Image Havel speaking eloquently to the masses of people who were hungry for freedom. Hear Marta Kubišová sing “Modlitba pro Martu” and Karel Kryl sing the national anthem. Imagine the trepidation, the fear, the anticipation, the triumph.

History is never far away in Europe. The Velvet Revolution happened during most of our lifetimes. Many of the leaders and even more of the members of the crowds are still with us today. And the monumental changes still resonate throughout the land.

When you sleep in on Friday, remember that it is in a world very different from that of 30 years ago. Light a lampion or, at least, jingle your keys.

https://brnodaily.com/2017/11/13/brno-urban-guide/dont-snooze-celebrate-the-velvet-revolution-this-friday/https://brnodaily.com/wp-content/uploads/2017/11/Dont-Snooze-Celebrate-the-Velvet-Revolution-This-Friday.jpghttps://brnodaily.com/wp-content/uploads/2017/11/Dont-Snooze-Celebrate-the-Velvet-Revolution-This-Friday-150x100.jpg2017-11-14T09:00:07+01:00Bruno ZalubilArt & CultureBrno Daily RecommendsBrno Urban GuideBrno,Brno Urban Guide,Culture,Czech Republic,Things To Do in Brno,Travel TipsThe Velvet Revolution was a non-violent transition of power in what was then Czechoslovakia. Photo: By Marc Dragul , via Wikimedia CommonsBrno, Nov 13 (BD) - Oftentimes, during the normal hustle and bustle of life, people note that they soon get a day off, look forward to sleeping in,...Bruno ZalubilBruno Zalubilbzalubil@hotmail.comAuthorA connoisseur of the unpredictable and unscripted drama of sports.Brno Daily