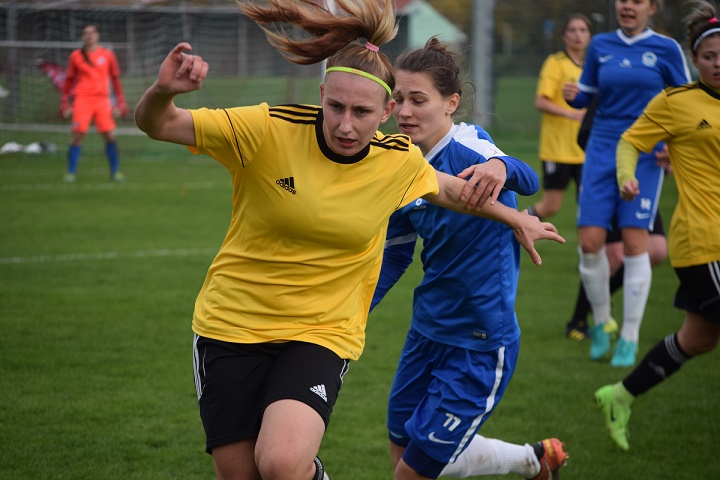 In the final minutes of a wind-swept game on Saturday, Lokomotiva Brno Horni Herspice needed a goal. They were desperate and they pushed the ball up the field in every way that they could.

Finally, in the waning moments of the game, Katka Kukučová got the ball at the right-side of the box, put the ball in the goal, and put Lokomotiva on the board again. Brno only tied FC Slovan Liberec, 2-2, but the last-second goal may prove the difference between staying in the top women’s league and relegation.

“Today’s point is golden,” head coach Tomáš Loder said afterwards (translated from Czech). “It might actually be worth more like three.”

This Saturday, Lokomotiva hosts Dukla in another important game. Kickoff is at 11 a.m. in Horní Heršpice (Sokolova 2).

Lokomotiva usually scores early in games, including at Slovacko, at Liberec and at Sparta earlier this season; on Saturday, however, they found themselves down to Liberec in the third minute. Brno goalkeeper Radka Bednaříková blocked the first shot but the rebound shot was too much.

In the 13th minute, Brno converted a corner kick into a goal. The Liberec keeper tapped the ball up into the air and Brno stopper Petra Ondřejková was able to head it in to tie the game.

Brno controlled the ball and kept the action moving toward the Liberec goal. There were several flashes of brilliant offensive coordination like when a Kateřina Vojtková cross was just centimeters over Clara Soquessa’s head or when Hana Ducháčková made some deft passes.

Unfortunately, Liberec was able to mount fast-break offensive attacks. In the 36th minute, they took the lead again.

Liberec controlled the ball more in the second half, but Brno began to really push in the final minutes and it paid off with the important equalizer.

Against Dukla in early September, Lokomotiva lost 1-3. Dukla has not won in five games on the road.

“It will be very important,” Loder said. “If we beat Dukla it will really help us in the standings.”

The season takes a break after this weekend and continues in late February.

Unlike the top-league women’s team in Brno, Zbrojovka was not able to score a last-second goal. They, like Lokomotiva, settled for a tie — in this case 0-0 — and one point in a game that they desperately needed.

In the second minute of extra time, late substitution Alvin Fortes wrestled the ball free on the goal line and centered it, but Francis Kone was unable to get enough strength into his shot and failed to score. Before play resumed, the final whistle was blown.

Zbrojovka had many shots on goal in the first half, including several by Michael Skoda. Defender Francsico Gomes made his debut with the team and provided solid play, including some crafty forward passes. Milan Luntonsky also made his presence felt in the second half.

“We are aware of the fact that we need to win and score at home,” head coach Roman Pivarník said (translated from Czech), “and I see the only negative is that we did not win. We had a lot of clean goal opportunities that we had to convert.”

Brno travels to Jablonec this Sunday; the game starts at 2 p.m. Teplice visits Brno on Nov. 18 at 4.

Last-place Jihlava is the final game of the first half of the season on Nov. 25.

Brno will play its last game of the autumn season against Moravian neighbor Vyskov on Thursday at 7 p.m. The game will be under the lights at their home field.

mmcité+ Brno tightened their game on both sides of the court in the final two minutes on Saturday to turn a five-point deficit into a 67-69 victory at USK Prague.

With 2:08 left, the aggressive Brno man-to-man defense shut USK down by pressuring shooters to take poor shots and creating turnovers in the final four possessions.

Offensively, Brno converted the defensive success into seven points. Kevin Mays tapped in an offensive rebound to start the comeback. Moments later, point guard Brian Sullivan stole the ball at the top of the key, quickly got it to Mays on a fast break, and Mays dropped the ball through the hoop, cutting the USK lead to just one.

Then, with three seconds left, Sullivan pulled the defense to him at the top of key, bounced the ball to Mladen Primorac on his right, and Primorac swished a 3-pointer to Brno on top for good.

Primorac was a solid 8-for-14 from 2-point range, but he missed three 3-pointers before hitting the game-winner. He had 20 total points and 11 rebounds.

Sullivan led the team with 24 points. Kevin Mays had 10 points and a game-high 12 rebounds.

The turnovers were the key. USK made them late, but mmcité+ made a concerted effort to reduce them and, according to head coach Dejan Jakara, that was the key between the third win of the season and the three losses.

“I think it was crucial that we lost only seven balls today,” Jakara said. “This hampered us against Ostrava, Ústí and Svitavy.”

Through eight games of the ZBL, KP Brno is 6-2 and in second place in the ZBL standings. The team from Kralove Pole, which lost its first two games of the season, have rebounded with six straight league wins.

The most recent KP Brno victory was over Technic Brno, 96-48, on Friday. The KP Brno offense spread the ball around well, with six different players reaching double-digits in points. Defensively, they kept everyone on Technic Brno in the single digits. Technic Brno is 2-6.

League play will now take a two-weekend break and returns in mid-November.

In international play, KP Brno traveled to Northern Italy and lost to Venezia 83-52, last Wednesday. They play in Wasserburg on Thursday. Their EuroCup schedule will conclude with home games against Fribourg on Nov. 22 and Venezia on Nov. 29.

With sweaters mostly bereft of sponsorship logos and playing on a rink that had more white space than advertisements, Marcel Haščák scored two third-period goals to lead Kometa to a 4-3 victory over visiting EV Zug in the Round of 16 of the Champions Hockey League.

It was the first of a two-game, home-and-away series. Kometa will travel to Switzerland on Tuesday. The series winner will be determined by aggregate score.

Haščák scored in the 49th and the 57th minutes.

The game was interesting for several reasons. The normal advertising was removed for contractual reasons. Lukáš Dostál, a 17-year-old from Brno, got the start in goal. And, watch enough sports and you will see strange things: on Halloween night, Kometa’s Alexandre Mallet scored a shorthanded goal late in the second period to take a brief lead; less than two minutes later, Zug had scored its own shorthanded goal to tie the game at 2.

At home against Zlin on Friday, Kometa lost in the overtime shootout. Martin Erat added to his league-leading assist total of 16 by setting up tying goals in the final minute of the first period (by Martin Zaťovič) and the final minute of the second period (Tomáš Svoboda). Along with his six goals, Erat is tied for the league lead with 22 points, too.

On Sunday, Kometa lost at Chumtov by the identical 3-2 score as their loss in Brno two months ago. This time, Chumotov finished the game in the extra time and didn’t wait until the shootout.

Kometa is third in the Tipsport extraliga with 35 points, just two behind Plzeň and one behind Třinec. They host Sparta on Friday at 6 p.m. and travel to Dukla on Sunday at 4 p.m. before continuing CHL play in Switzerland on Tuesday.