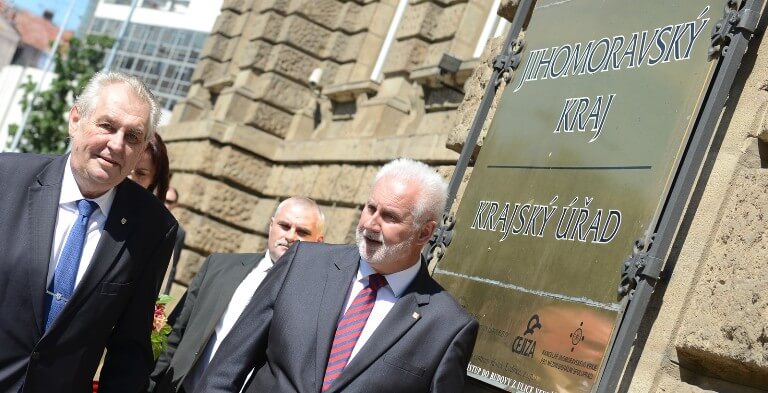 The most attentive observers started focusing on the condition of Zeman, 73, this spring when the head of state stumbled and lost a shoe. Photo: Zeman visiting South Moravia, Hrad.cz

Prague, Oct 30 (CTK) – Czech President Milos Zeman’s physical condition sharply declined in the past year, which raises the question of how he would cope with the presidential duties if elected for another five-year term in January, Petr Kambersky writes in daily Lidove noviny (LN) today.

The most attentive observers started focusing on the condition of Zeman, 73, this spring when the head of state stumbled and lost a shoe, Kambersky writes.

Doubts definitively prevailed among observers in the summer, when Zeman was in so bad a condition during his visit to China that his speech there became quite incoherent, even though very short, and the “whole world” had to wait for him coming on a golf cart to join the rest of statespeople, Kambersky writes.

True, the programme of his China visit was demanding, and Vaclav Havel, one of the previous presidents, was not in a good health condition either at the end of his last mandate in the early 2000s, Kambersky writes.

The problem does not rest in that Zeman cannot walk. The problem rests in the sharp decline in his condition during a single year, Kambersky writes.

Last autumn, Zeman still had a smooth and long speech at the award-giving ceremony marking the October 28 anniversary of Czechoslovakia’s birth in 1918. His speech one year later, this Saturday, was shorter, with Zeman stammering and running out of breath, Kambersky writes.

At last year’s ceremony, Zeman repeatedly left the rostrum to approach each of the dozens of awarded persons, but this Saturday, Zeman was keeping at the rostrum and each of the awarded had to go to him, including men who are one generation older than he, Kambersky writes.

Last year, Zeman pinned a medal on the chest of each of those awarded, but this year he had not been fit enough to do so, Kambersky writes.

The Czech president cannot walk, and he leans on the rostrum even when standing. Someone has to permanently support him in walking, and he is even incapable of pinning medals on those awarded, Kambersky writes.

If Zeman’s condition continued declining so sharply, how would he later manage to fulfil his duties if re-elected? Kambersky asks, alluding to Zeman’s announced plan to seek re-election in the mid-January direct presidential election and to his relatively high popularity which makes him one of the election favourites.

In another article, LN points out that Zeman’s wife Ivana led her husband to Prague Castle’s Vladislav Hall, where the ceremony took place, and across the hall to the rostrum, and that detailed TV shots showed her hand trembling as a result of her efforts to support Zeman heavily leaning on her.

Zeman’s team rearranged the traditional ceremony this year in an evident effort to make him look fresh and healthy ahead of the January presidential race, LN writes.

That is why the ceremony was about 20 minutes shorter than usual, with a children choir’s performance and a procession of soldiers carrying decorations and orders being left out, and a soldiers’ procession with flags being cut short.

After the ceremony, satisfied comments of Zeman’s aides could be heard behind the scenes.

“It was an important step towards the president’s [Zeman] chance of being re-elected,” the daily quotes a well-informed source as saying.