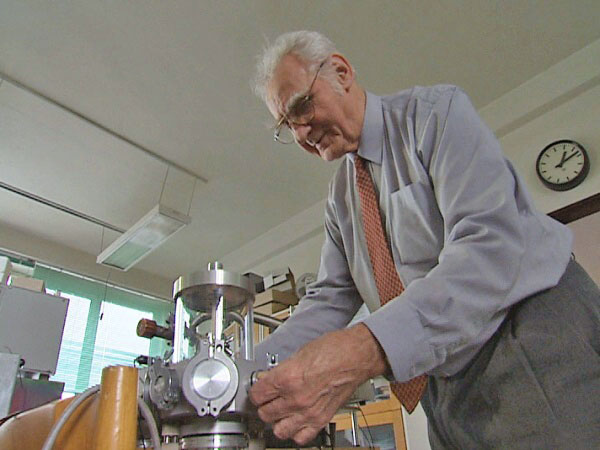 Professor Armin Delong was the founder of electron microscopy in the former Czechoslovakia. Photo: Ceska televize

Brno, Oct 9 (CTK) – Armin Delong, an inventor of electron microscopes and one of the most renowned Czech scientists, died at age of 92 on October 5, his daughter Silva Mackova confirmed to CTK on Saturday.

“I can confirm that my dad died on Thursday night. It is hard to deal with it, but he died here at home as he wished,” she said.

Delong’s parents were French, but they moved to the former Czechoslovakia. The family lived in Bartovice, which is now part of Ostrava, the industrial centre of the Moravia-Silesia Region. Armin was interested in electronics as a child already and he constructed primitive radios and a telephone by himself.

He graduated from the Brno Technical University, focusing on electrical engineering, especially low-voltage current. In 1978, he was named a professor at the university. He headed the Institute of Scientific Instruments of the Czechoslovak Academy of Science in Brno for more than 30 years.

In 2005, he won the Czech Mind (Ceska hlava) annual prize for his research and particularly for his low voltage transmission electron microscope LVEM5. In 2015 he received a medal of merit for his scientific contribution from the Czech president.

Delong kept working in electron microscopy until his high age in the Delong Instruments company seated in Brno.

https://brnodaily.com/2017/10/09/breaking-news/electron-microscopy-founder-armin-delong-dies/https://brnodaily.com/wp-content/uploads/2017/10/armin-delong.jpghttps://brnodaily.com/wp-content/uploads/2017/10/armin-delong-150x113.jpg2017-10-09T04:03:52+02:00BD StaffNews - ArchivedBreaking News,Brno,Famous People,Science,TechnologyProfessor Armin Delong was the founder of electron microscopy in the former Czechoslovakia. Photo: Ceska televizeBrno, Oct 9 (CTK) - Armin Delong, an inventor of electron microscopes and one of the most renowned Czech scientists, died at age of 92 on October 5, his daughter Silva Mackova confirmed to CTK...BD StaffBD Staff team@brnodaily.czAdministratorBrno Daily - English News and Events in Brno.Brno Daily