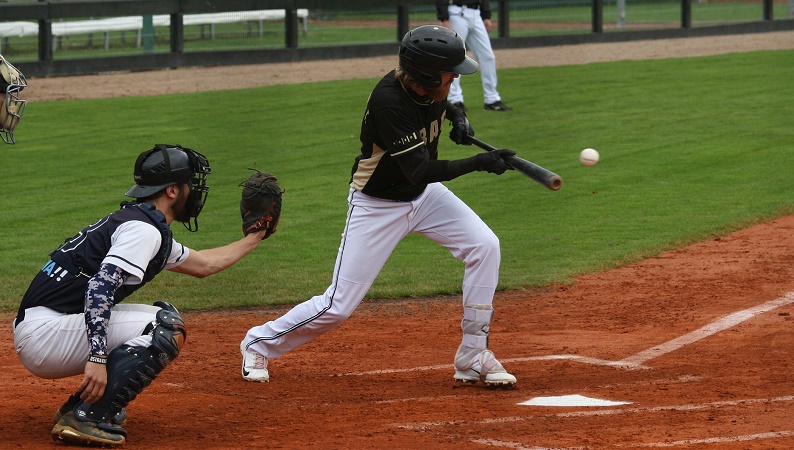 Jakub Hajtmar, who had the winning hit in Game 1, tries to bunt his way on base in Game 2. Photo: Zeb Telfer

Each of the first three games of the Czech Series came down to the final dramatic at bat with the home team coming out on top. The Draci, who are shooting for their 21st title, won Games 1 and 2 on Friday and Sunday. Ostrava staved off defeat by winning Game 3 on Monday night.

The best-of-five series will be determined this weekend: Game 4 is in Ostrava on Friday at 7 p.m. and, if necessary, Game 5 will be in Brno on Saturday at 1 p.m.

It has been tight throughout the three games. In Game 3, Ostrava took a three-run lead into the final three innings, but the Draci scraped back into the game with a run in the seventh, eighth and ninth innings, tying the game at 5 when Pavel Budsky, a 43-year-old first baseman, hit a home run over the left field fence. Ostrava, however, was not done. With two outs in the bottom of the ninth, Jakub Malík knocked a single up the middle of the infield to score Jakub Kaplan from second base with the winning run. The Arrows won 6-5.

The first two games of the Czech Series finished with the home-team Draci winning 3-2 on the final swing. On Friday night, right-handed hitter Jakub Hajtmar poked the ball just over the Arrows first baseman and into shallow right field. The two runners, who, with two outs, were moving at the crack of the bat, scored.

Saturday took an extra frame. Wesley Roemer pitched nine innings, gave up seven hits and an earned run in the seventh inning, walked two, and struck out seven. In the bottom of the ninth, he was given the chance to help himself break the 1-1 deadlock at the plate. He failed, and the game went into extra innings.

Ostrava scored a run in the top of the 10th inning when the Draci failed to turn a double play. (Note: Extra innings start with the previous two batters on second and first bases.) In the bottom of the 10th inning, Tomáš Polanský laid down a beautiful bunt that went for a hit and loaded the bases. Then, with the Ostrava infield playing in, Martin Červinka slotted a grounder past the Ostrava third baseman to score two. Roemer, who had made the final out of the ninth inning and had been placed at first base for the extra frame, scored the winning run.

Martin Dočekal scored in the 54th minute to lead Kometa to a 2-1 victory over Sparta on Tuesday at DRFG Arena. It was his third goal of the week; he also scored two in the 4-2 victory over HC Dukla Jihlava on Sunday.

On Sunday, the two historically best teams in the nation met when Dukla Jihlava visited Kometa. Both have won the national title 12 times. The game on Sunday was the 150th time the two teams had met, but, because of more than two decades of playing in different leagues, it was the first matchup in 21 years. Longtime team captain Leoš Čermák returned against Dukla Jihlava for his first game of the season and earned a point with an assist; however, Dočekal was the player who actually wore the captain’s “C” on his sweater and he scored two goals in the first of four games against HC Dukla Jihlava this season.

Monika Stehlíková (15 points), Hana Gašicová (13), and Angelika Miszkiel (12) also reached double-digits on the scoreboard. Overall, Technic Brno was 31-for-47 from 2-point range and 7-for-9 from 3-point range.

Interestingly, Technic led the South Bohemian team just 8-6 after the first quarter, then they scored 33, 25, and 24 points in the subsequent quarters.

In all, nine of the 10 players to take the court scored points. Tea Buzov had 10, including a perfect 6-for-6 from the free-throw line.

USK Praha is the consensus favorite to win the ZBL and they flexed their muscles against KP Brno, winning 98-64 on Saturday. Brno got half of its points from Edita Šujanová (21 points) and Gabriela Andělová (14). Praha outscored Brno, 54-30, in the second half.

Lokomotiva Brno H. H. started the game at Slavia with a nice goal in the seventh minute: Tereza Krištofová delivered the ball into the middle of the box with a high, arching corner kick; Petra Ondřejková headed the ball toward the Slavia goal and off of a defender; and Hana Ducháčková stepped up and blasted the ball in the goal. Unfortunately, Slavia, the undefeated top team in the top women’s league, responded with 11 unanswered goals.

FC Hradec Králové comes to Horni Herspice on Saturday at 11 a.m. Both Lokomotiva and Hradec Kralove are in the bottom half of the standings. Hradec Kralove has scored only three goals through five games.

Zbrojovka Falls to Bottom All Alone

Zbrojovka got on the board early, but they could not hold on, lost 2-1 at Karvina, and fell back to the bottom of the HET Liga standings.

Michael Skoda scored the Brno goal in the eighth minute. Tomáš Pilík sent the ball into the box with a free kick, Petr Pavlík headed it across the goalmouth, and Skoda slotted it to the left of the Karvina goalkeeper. Karvina tied the game a dozen minutes later.

In the second half, controversy ensued. Alvin Fortes was called for a foul in the box and Karvina was awarded a penalty shot. Brno goalkeeper Dušan Melichárek was outraged by what he thought was a simulated fall by Karvina’s Jan Moravec. Melichárek, the Brno captain, was given a yellow card for his protests. Six minutes later, Melichárek was hit by a Karvina player as he went for a ball, he reacted aggressively, and he was given a red card and forced to exit the game. Pavel Halouska, 22, finished the game in the Brno goal.

Brno had briefly moved into 15th place in the 16-team league last week because of goal differential. Now they are last with only four points through eight games.

Zbrojovka travels to Prague to play third-place Slavia (without Melichárek in goal) on Sunday at 6 p.m. The next home game will against Slovacko on Saturday, Oct. 14 at 5 p.m. The remainder of the fall season has only two more home games: Dukla Praha during the last weekend of October and Teplice during the middle weekend of November.

Not Your Grandmother’s Game: LI-NING International Tournament This Weekend

The best Czech and international badminton players will converge on Sport Hall Vodova in Brno this weekend for the LI-NING International Badminton Tournament. The main draw of the three-day Czech Open starts on Thursday. Quarterfinals will be on Friday. The Saturday schedule has semifinals at 9:30 am. and finals at 4:30 p.m.

Tickets will be available at the arena for 150 Kč/Day or 250 Kč/All tournament. Click here for more information.

One hundred and one horses are pre-entered in the eight races that will be run on Saturday during the third and final day of racing at Brno-Dvorska this year. Five races will be on the flat track and three will be steeplechases. Post time for the first race is 1:30 p.m. Admission is 60 Kč for adults and 30 Kč for children. The racing program costs 50 Kč. Parking is available for a small fee. Mass transportation is available with Bus No. 48; get off at the Vlčkova stop.

The 127th running of Velka Pardubicka will go to post on Sunday, Oct. 8, in Pardubice. The 6.9-kilometer steeplechase over 31 obstacles is the most famous race in the Czech Republic. Tens of thousands will be in attendance and many more thousands will watch on live television.