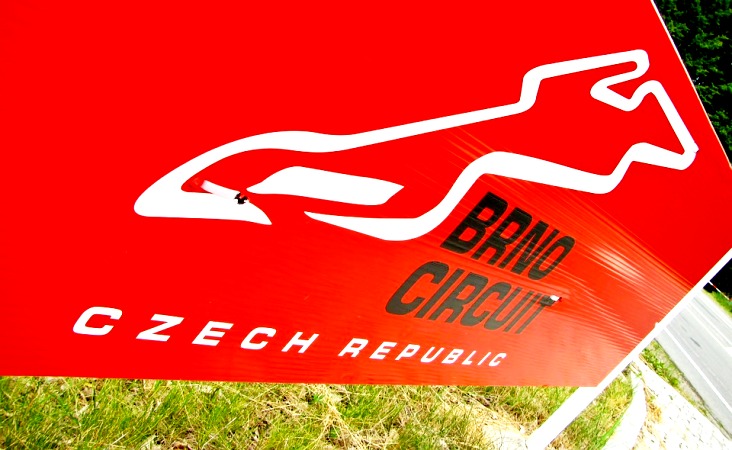 Conventional wisdom holds that life in Brno slows during the summer months because most of the 80,000-something students have left. There is one important exception to this fact — and it definitely speeds thing up again.

The Monster Energy Grand Prix will bring the top motorcycle riders in the world to Brno this Friday, Saturday and Sunday at the Masarykův Okruh (Masaryk circuit, Automotodrom Brno). Last year, 80,000 were in attendance on the final day when Cal Crutchlow provided a fantastic story: he won the first GP of his career; he was the first Brit to win a MotoGP in 35 years; and the victory came three weeks after the birth of his son, Willow. His average speed was 288.9 kmh.

Brno is the 10th race of this 2017 season and the first after a monthlong summer break. Four riders are within 10 points of each other at the top of the season standings. Valentino Rossi, a legend who is still riding at 38, is fourth and will again be a local fan favorite. He won his very first GP here in 1996 and last year he finished second. He has nine overall titles — the last in 2009 — and he has finished second in the standings for the past three seasons.

The Masarykův Okruh is west of the city center. The track is 5.403 km long with 15 turns (nine to the right and six to the left)

There are still tickets available. Click here to purchase tickets (in English).

More than 8,000 people watched the opening game of the HET Liga on Friday night in Brno, but only the 900 Banik Ostrava fans went home happy.

Banik scored two second-half goals to win their first game back in the top league, 3-1. Brno, which fielded four new players on offense, had many chances, but failed to capitalize and allowed Banik several fast-break opportunities.

The Zbrojovka goal came in the 37th minute when they were down by a goal. Midfielder Tomáš Pilík got the ball to Milan Lutonský in the box and Lutonský redirected the ball backward to Miloš Kratochvíl, who drove it into the upper middle of the goal.

Milan Baroš, a longtime fixture on the Czech national team, came off the bench to give Banik the lead again. Banik scored again late in the game.

Zbrojovka next plays at Zlin on Saturday at 5 p.m. Their next home game is Saturday, Aug. 12 when they host Bohemians 1905 at 4 p.m.

Separate from the HET Liga, Zbrojovka will start in the MOL Cup competition with a second-round game at 1. HFK Olomouc on Wednesday, Aug. 9 at 5 p.m.

Running is a sport where elite athletes complete, but it is also a sport in which anyone can participate. Summer is a great time for exploring new routes. Or start running.

The Mattoni FreeRun project has established a handy map of more than 80 five-kilometer routes throughout the Czech Republic. Find it here (Czech only). It is also available through the RunCzech mobile phone application.

Brno is represented by routes in Mariánské údolí, Lužánky, and along the Svratka. Each of the routes have dedicated coaches.

KP Brno (at ZVVZ USK Praha on Sept. 23) and MK Technic Brno (at U19 Chance on Sept. 24) start on the road. MK Technic Brno returns home to host SBŠ Ostrava on Sept. 27. KP Brno starts the season with three road games before returning to home on Oct. 4 to play host Slovanka MB.

On the men’s side, MMcité Brno will start its 2017-18 men’s basketball campaign at home against GEOSAN Kolín on Oct. 4.

This is the weekly Brno Sports Report. Most of the stories are about the traditional “English-speaking” sports — football, hockey, baseball, American football, rugby, etc. — but it is also about the interesting local spectator and participation sports — tennis, badminton, running, horse racing, swimming, rock climbing, biking, etc. If you have any suggestions for what should be included, please pass them along to me.

https://brnodaily.com/2017/08/02/breaking-news/brno-sports-weekly-report-rossi-brings-motogp-title-fight-back-to-brno/https://brnodaily.com/wp-content/uploads/2017/08/moto-gp-brno.jpghttps://brnodaily.com/wp-content/uploads/2017/08/moto-gp-brno-150x92.jpg2017-08-02T06:27:21+02:00Bruno ZalubilNews - ArchivedSportBreaking News,Brno,Czech Republic,Sport,Things To Do in BrnoBrno, August 2 (BD) - Rossi Brings MotoGP Title Fight Back to Brno. Plus, a Zbrojovka Recap, 5km running routes, basketball schedules and the overall Brno sports schedule. Photo: PixabayConventional wisdom holds that life in Brno slows during the summer months because most of the 80,000-something students have left. There...Bruno ZalubilBruno Zalubilbzalubil@hotmail.comAuthorA connoisseur of the unpredictable and unscripted drama of sports.Brno Daily