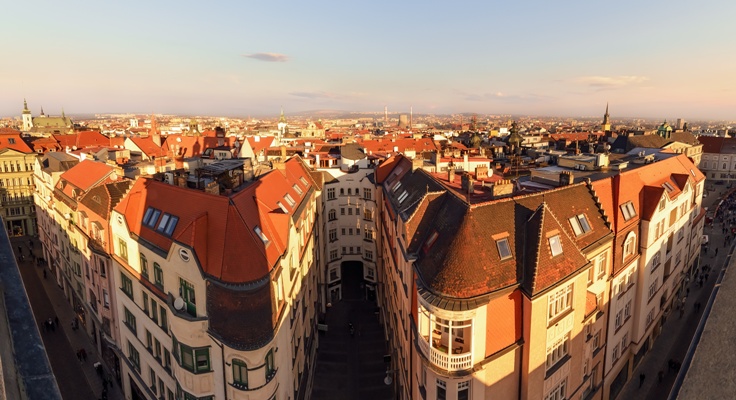 Discover Brno’s architecture and its secret passages. This tour intoduces the most visited tourist attractions and reveals the hidden and less-known places. “1,000-plus Modernist buildings around town might be as big a tourist draw as the outdoor cafés in its medieval square or the mummified monks on view in the crypt of the Capuchin church,” writes Karrie Jacobs for the web Travel and Leisure. Brno’s often mentioned as the cradle of functionalism; the city’s passages are symbols of this architecture style.

Another features Germans and Jews living in Brno and the historic importance of the communities to the city. At the turn of the 20th century, Brno was a German-speaking city. The majority German representation in the city administration ended in 1919.  A guided tour begins at the Moravské náměstí, where the original German House once stood.

In 1891 the German House or Deutsches Haus designed by the Berlin architects Ende and Böckmann in the style of northern German architecture was built in the space of former city’s fortification walls. The building, initiated by the German minority living in Brno, including important Jewish businessmen, was supposed to be a place for meetings, cultural events, and education for all social classes. However, shortly after World War II, the House was marked as a symbol of fascism and demolished. The park was used as a burial ground for deceased Soviet liberators.

The tour of breweries tells the history of this craft in Brno since the middle Ages. The tour covers the most prominent breweries in Brno city; you can visit historic sites of the first breweries with fermenting cellars right in the city center.

The walk begins at the Petrov cathedral, the place of a historic tomb of Brno’s brewer. The 1km tour shows seven places associated with the history of beer brewing in Brno.

In early August, there will be tours that will introduce you in detail two famous streets – Pellicova and Barvičova. The relaxed strolls will bring you to the famous villas of Kurt Gödel – mathematician and philosopher; Jiri Kroha; Josef Polášek and others.

A very important piece of history for Brno is the Thirty Years’ War. One of the thematic tours brings back the history of Swedish army attacks in Moravian region and Brno. Interesting fact – Brno was the only Moravian city that defended itself from the Swedes and served as the sole capital at the time. The successful defense of the city allowed the Austrian Empire to regroup its armies and repel the Swedes. In recognition of its services, Brno was rewarded with a renewal of its city privileges. In the years following the Thirty Years’ War, the city became an impregnable Baroque fortress…

The first tour starts on July 15.

“The thematic tours are very specific and not all our guides are able to quickly prepare the program in a foreign language,” informs Ms Pečinková from Brno Tourist Information Center (TIC). “We offered tours in English and German last year; the interest was however very low. We decided to abandon this idea this season,” continues Ms Pečinková.

“There are other tours available in foreign languages – Minibus Sightseeing Tours with audio-guides in English and German and standard Brno tours.” Standard Brno tours are three: First time in Brno; The best of Brno; and Legends of Brno.

“Throughout the whole year, we provide guided tours. The groups are accompanied by highly qualified guides, members of the Guides Association of the Czech Republic. It is possible to adjust the tour according to a client’s wish,” writes TIC on their website.

If you want to join any of them, call in advance, ask for a tour guide able to speak your language, and make a group booking.

https://brnodaily.com/2017/07/10/brno-urban-guide/guided-walking-tours-in-brno/https://brnodaily.com/wp-content/uploads/2017/07/brno-city-tours.jpghttps://brnodaily.com/wp-content/uploads/2017/07/brno-city-tours-150x82.jpg2017-07-11T07:39:22+02:00Taras_BiletskyiBrno Urban GuideFamily and KidsTravelBrno,Brno Urban Guide,Things To Do in Brno,Travel TipsBrno, July 10 (BD) - Walking tours with professional tour guides are an excellent way to get to know a city. Brno Tourist Information Center (TIC) organizes many thematic guided tours this summer. Photo: Fotolia Special thematic guided tours in the Czech language Discover Brno's architecture and its secret passages. This tour...Taras_BiletskyiTaras Biletskyitarasbiletskyi@gmail.comEditorLiving the irrationality one absurdity at a time.Brno Daily